As a young mother, poet Kim Garcia stayed in a Benedictine Monastery, where she was exposed to the peaceful solitude and firm routine of monastic life. She lived the way the monks did—simply: rising each morning for prayer and meditation, eating together in peaceful silence, listening to the chants, hymns, and psalms that, to Garcia, sounded like poetry.

“One day, a monk smiled at me and said, ‘Writing is your prayer,’” Garcia recalled, smiling.

Garcia, a creative writing professor at Boston College, now uses silence and the ordinary to create enchanting and haunting poetry that brings readers to question what it means to be human.

Garcia’s latest project is her award-winning book of poetry, Drone, Winner of the 2015 Backwaters Prize. The collection marries the personal and political aspects of war, prompting readers to wonder where the boundaries of a warzone end and begin.

Drones—unmanned aerial vehicles controlled by pilots in secured locations on the ground—are frequently utilized by the U.S. military in combat zones in Afghanistan and Iraq. From the time of the drone’s conception, the weapon has been subject to criticism and debate.

Supporters argue that drones save countless lives, sparing innocent pilots and aerial technicians from the violence of combat zones. In contrast, critics argue that drones dehumanize warfare and remove pilots from the stark reality of murder, specifically from the deaths of innocent civilians overseas.

“From the time I first learned of drone warfare, I was haunted and bothered,” Garcia said. “Drones are silent and hidden. Front lines are completely redefined by them—anywhere can be a warzone where a drone is present.”

In her poem, “Drone: The Pilot’s Wife in Church,” Garcia details the divisive effects drone warfare has on humanity, marriages, and a soldier’s relationship with his conscience. The poem highlights a contrast between a secular, modern world, a war-torn world in the Middle East, and God’s safe, grace-filled world, the world intended for his people.

As the pilot’s wife stands quietly in church, listening to the words of her pastor, she cannot help but wonder what or whom to pray for. Is it just for her to ask for her husband’s hands to stop shaking, for his mind to stop escaping him, if he ended dozens of lives? He was following the orders of superiors, but in the end, he was the one who killed—all with the push of a drone-controlling button.

“What should she pray?” Garcia writes. “How can God answer?”

In “Drone: The Pilot’s Wife in Church,” and a variety of other poems from her collection, Garcia brings her audience to explore answers to life’s most difficult questions. Though war has been a part of human existence for centuries, American pilots have never been quite as powerful and removed—almost omniscient—in times of war as they are when flying drones.

“People speculate that directing a drone is a lot like playing a video game,” Garcia said. “But that’s not the case. Pilots may be physically removed, but they are so intimate with their targets. They have to stay and watch, watch the consequences of their shots. And that marks soldiers for life.”

As a poet, Garcia takes an intimate approach to writing, accompanying her words from their origins in her mind, to their translation onto the page, to their absorption into the ears of those around her. She wants to hear their effect, their impact.

From the time she was a young girl, Garcia loved books and reading, and imagined herself writing for the rest of her life.

“I always wrote a heavily poetic kind of prose, but I had no idea what poets would do or how they would support themselves,” Garcia said.

During her days in high school and throughout her undergraduate career at Reed College, Garcia found herself supported by a wonderful variety of teachers—from 11th grade English teacher Mary Weidner, to Lisa Steinman, the Kenan Professor of English and Humanities at Reed. Through this support and her commitment to writing, Garcia’s love of literature culminated in a career as an award-winning poet and beloved professor.

In addition to Drone, Garcia is the author of The Brighter House, recipient of the 2015 White Pine Press Poetry Prize; Tales of the Sisters, winner of the 2015 Sow’s Ear Chapbook Contest; and Madonna Magdalene, released by Turning Point Books in 2006.

As a creative writing professor, Garcia supports and instructs her students in a similar style to that of Weidner and Steinman.

“I do with my students exactly what’s worked for me,” Garcia said. “I teach my students to be consistent in writing in the morning, before anything else breaks in.”

Garcia’s poems leave an impact on her audience members, floating in the forefront and background of their minds and drawing attention to issues and sensations they may not be aware of.

“Your eyes / which were not your eyes, but / the large saucers of fairytale dogs / in my blue book. I will hold you,” she writes in “Home Front, Pilot’s Wife.” 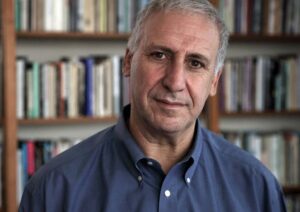