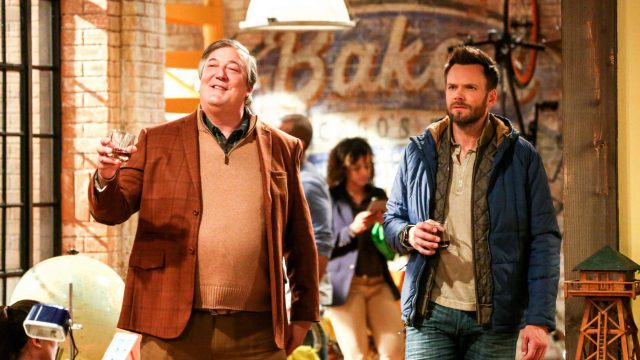 What happens when you take a rugged, old-school, outdoorsy man and put him in an office with online content-creating millennials who can’t look away from their screens? CBS explores this concept in its new show, The Great Indoors. The central and pretty much only conflict in this show stems from this exaggerated generational conflict. Quips like, “You’re like the human dial-up,” “Do you want me to text you these beers?” and, “What are you doing for your date? Blockbuster and chill,” fly back and forth between people on both sides of the age gap. While this concept could be way more offensive than it is to viewers young and old, the quick writing and the skilled cast make the show enjoyable for a wide demographic.

The Great Indoors sticks to the classic fish-out-of-water setup. The show takes place in the digital headquarters of a prestigious outdoors magazine, which, due to budget cuts, is shutting down its print operation, and going online. To aid in the transition, the editors bring in from the field their legendary explorer Jack Gordon (Joel McHale) to help lead the digital team. The team consists of three young workers, stereotypical nerdy millennials. They are smart and successful, but fall apart on dates, need work to be fun, and require trophies for participation. In the pilot, as Jack struggles with whether to accept the job of what he calls “running digital daycare,” he tells his boss, Brooke (Susannah Fielding), “You mean I could forge a lasting, meaningful relationship with a younger generation? And who knows, even though I’m the teacher, maybe I could end up blah bleh bleh.” The rhetorical question defines the show, setting up its traditional premise of two unlike groups finding each other, but the show is still self-aware enough that it doesn’t take itself too seriously.

The second episode improves on the first by moving away from just setting up the premise to actually exploring it. After being beaten up at a bar in a fight because of a date gone awry, Jack enters the world of digital dating. Plagued by arrogance and a lack of online awareness, he reluctantly accepts the digital division’s help. In a Steve Jobs-style presentation, the team revamps his profile, but before his training is complete, he goes rogue. It’s a disaster, and after his first date, his identity is stolen. The episode somehow works again, and while it laughs at millennials and their out-of-touch elders, it does so with enough heart that no one is offended.

The show’s charisma comes from McHale, of The Soup and Community. While the show and its characters are widely different in nature from the digitally savvy host of The Soup, or the anti-traditionalist, pro-meta Community, his timing and chemistry still shine through brightly. Even though Jack is brutally sarcastic, absurdly arrogant, and a laughably out-of-touch newcomer to the office, McHale infuses him with enough charm and subtle warmth that the audience can’t help but fall to his side.

While McHale is the clear star of the show, the rest of the cast is adept at wringing laughs out of their often one-note characters. Out of the three main digital employees—Clark, Mason, and Emma—only Clark, played by Superbad’s Christopher Mintz-Plasse, gets any fleshing out. He is a classic nerd, but has an open obsession with his childhood idol, Jack. This dynamic, while not original, proves to be a consistent source of laughs. Fielding and McHale have obvious chemistry, as their characters have history. The back-and-forth between these two provides the show its emotional heart. The most bizarre casting is that of the CEO, played by Stephen Fry. Fry is wildly underused and even though he generates the most laughs per line, one cannot help to feel that for an actor and celebrity of his caliber, this show and his minimal role in it are miles beneath him.

Overall, and despite its flaws, the simplest thing to say about the show is that it is funny. It is not going to be considered premier TV or high-brow humor, but if you don’t look too hard or ask what an explorer is going to do to help run a digital office or why Jack, who isn’t older than 40, has pretty much never seen a computer before, it can be pretty enjoyable. The show makes you laugh, and the jokes come quick enough that before you realize a joke didn’t land, you’ll already be laughing at the next one.