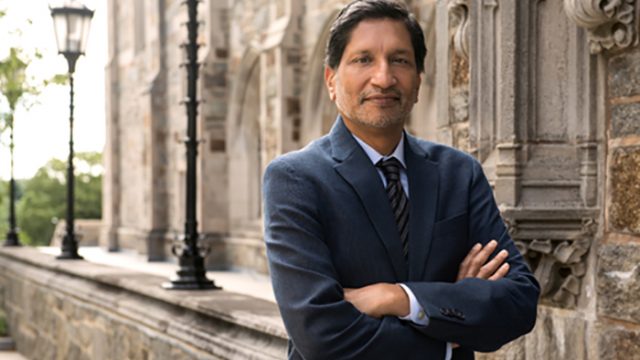 New SSW Dean Brings Experience in Poverty Research to BC

“Age quod agis” is a Latin phrase familiar to many throughout the Jesuit tradition It is often translated as “do well whatever you do,” but for a young man growing up in Hyderabad, India, it was a challenge to not just do well, but to do good.

Yadama’s ideas about helping the less fortunate were instilled at an early age, the same way they are being instilled in many students at BC—through Jesuits in his life who educated him in ideals to live by.

Not only did they teach him to do well, they taught him to think about his place in the world.

Yadama is excited to return to a Jesuit university for this very reason, as he believes it is a place where students are driven by something deeper than the idea to succeed in a traditional sense—they’re driven by the potential to affect change around them.

“As a Jesuit institution, we have students in the undergraduate and graduate schools that are focused on making a change for societal impact,” he said. “If it is all about ‘men and women for others,’ we give a reason to exercise and experience that, not just as an ideal, but in practical and pragmatic ways.”

The way to experience being a man or woman for others is through the tenet Yadama believes is at the core of social work—placed-based work with communities to understand and improve the lives of the poor, work that is then used to understand larger problems.

Academic institutions often do great research about how those in low- and middle-income communities and countries live, and people do work with those communities to help the problems facing them. But to reach success in a sustainable way, the research and the experience must be combined to understand and intervene in the long-term, he said.

“Once that intervention is introduced, then piloted, and recalibrated, we can really begin to deploy it and scale it as we see it’s working,” he said. “That’s translating knowledge that we build with communities in a place and across disciplines, translating it for impact. So that we are not just doing data collection for the sake of doing it and writing up an article. But we are going beyond that … to effect change.”

It is especially exciting for Yadama to lead a place where many are interested in interdisciplinary approaches to problem-solving.

He said that when different parts of the University join forces, they can begin to design and craft interventions into real problems.

And Yadama has come at a time when there are plenty of interventions that need to be crafted.

Environmental, educational, health, and societal issues seem so numerous that many feel overwhelmed with the depth and complexity of challenges, especially in the aftermath of the presidential election.

Yadama believes that with each unique problem, a unique person is needed to help find a solution. And often he says it takes many people with different backgrounds to come together and share their perspectives to have the most powerful impact.

Yadama’s own background is largely focused on research into poverty and the environment. He sees that those in the United States often take for granted the ability to turn on a light, run water, or charge a laptop, but there are millions around the world who have no such luxuries.

“That’s my focus,” he said. “How to power the poor. How to get them into clean systems of energy so that we can get them out of poverty over the course of a generation. But even as we’re working on that long-term plan, how to get them renewable energy today.”

To do this, Yadama applies his own ideals of place-based work and research. For more than a decade, he has visited communities around the world to establish relationships and experience firsthand challenges people face today.

With the current state of the U.S. and the world, Yadama directly experiences the depth and breadth of many issues facing many people. He also understands how disheartened many feel about how much change they can directly influence.

But for Yadama, in the face of setbacks he believes one must respond with even more tenacity to approach problems, and more audacity to create solutions.

“How do the poor live? The poor are tenacious. They get up every day. That doesn’t mean they’re satisfied. They just don’t give up,” he said. “They are the ones taking risks at the margins every day. Those of us who are fortunate should understand and learn from that.”

Photo Courtesy of BC Chronicle