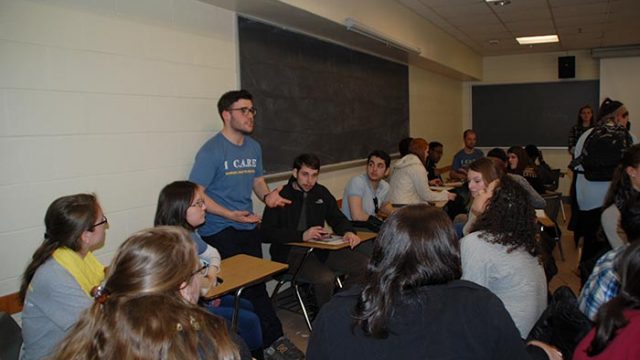 Within the next week, the Undergraduate Government of Boston College (UGBC) will release a new social media campaign aimed at challenging traditional views of masculinity both at BC and in society.

The campaign, organized by UGBC’s Women and Gender division, is a series of brief photoshoots and interviews with students conducted every Friday and Sunday. The photos are similar to Humans of New York, in which the subjects are interviewed and posted online alongside a candid photograph. The project focuses on the constraints stereotypical masculinity places on a male adolescent.

Russell Simons, UGBC president and MCAS ’17, and Meredith McCaffrey, UGBC executive vice president and MCAS ’17, have wanted to put a greater focus on masculinity issues for some time now. Their official platform states that they will work to “…expand conversation about the culture of masculinity on BC’s campus.” This year, Simons and McCaffrey have begun to implement more concrete steps to address the issue. These efforts include the photo project and an event entitled “Decoding the Bro Culture.”

The goal of the project, however, as explained by Megan Flynn, the director of women and gender programming for UGBC and MCAS ’17, is not to just focus on masculinity. It is intended to spark a discussion on campus about gender roles in a larger context. Flynn wants to explore the interplay between feminism and masculinity.

“When I signed up to do women and gender at UGBC, I was thinking, ‘You know, feminism and empowerment,’” Flynn said. “I think in a lot of ways that movement requires men. You can’t ignore half of the people, and I think feminism and the overall goal of kind of breaking down gender stereotypes helps everyone.”

“Hopefully people realize how feminism and gender equality benefits everyone, it’s not just for women.”

— Megan Flynn, the director of women and gender programming for UGBC and MCAS ’17

UGBC’s campaign does not aim to solve the issues pertinent to masculinity, but rather begin a constructive conversation within the context of campus that can have an impact beyond BC, Flynn said.

“We wanted to focus on masculinity as a concept in order to show how these stereotypes of women being lesser and women being objectified have not just hurting women, it’s also men who feel pressure to act a certain way,” Flynn said. “[They] feel pressure to take on the opposite role to feel dominant.”

This pressure manifests itself in different ways on BC’s campus, perhaps most notably in ‘Plex culture,’ the reality that BC men often feel pressure to exercise to attain a culturally defined aesthetic rather than maintain health, Flynn said. In Flynn’s opinion, gender roles are also reflected in personal relationships—by breaking down the false premises of gender roles, students are better able to interact with the individual, rather than their gender stereotype. The campaign is intended to shed light on those smaller interactions and how they connect to the larger issue.

Even though the photoshoots and interviews were focused on masculinity specifically, the project aims to challenge all gender roles. By focusing on one gender stereotype, Flynn hopes to facilitate a conversation about individual experiences that can help a greater population.