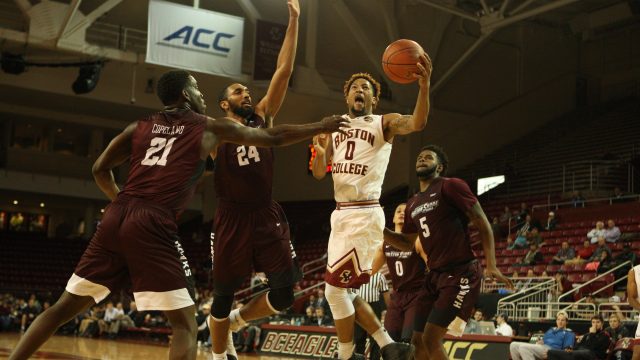 Blow the dust off the party supplies and ready the champagne: Boston College men’s basketball has won its first game in the year 2016. After squandering perhaps its best chance at a win since Dec. 30, 2015, and suffering its 20th straight loss against Nicholls State on Friday, the Eagles rebounded—both literally and figuratively—to secure a no-doubt 16-point victory against the visiting University of Maryland Eastern Shore, 73-57.

The key to the game for the Eagles (1-1) was the constant punishment they doled out on the boards from the tip to the final horn. BC collected 49 rebounds on the night, out-rebounding its opponents by 16. Seasoned veterans Connar Tava and Mo Jeffers were the ringleaders of the operation, combining for 23 boards on the night.

“I was just trying to do little things for the team to get us going like offensive rebounds,” Tava said. “Just try to bring in energy, because we didn’t bring it on Friday.”

And bring it he did. BC was active on both ends of the court from beginning to end. The undersized Hawks (0-3) were at the mercy of a BC rebounding barrage that seemed to snag the ball at will. With just one player in the rotation above 6-foot-7 compared to BC’s four, the Hawks were outsized, outmuscled, and outworked, leading to BC pulling down 17 offensive rebounds. For a team that has struggled rebounding in recent years, the intensity applied to crashing the boards at both sides of the court was a welcome sign.

The defensive effort from Eagles was aggressive and effective. They forced the Hawks into 14 turnovers while simultaneously limiting their opponent to 36 percent shooting from the field. In addition to playing effective one-on-one defense, BC functioned efficiently as a unit, making quick rotations leading to stifling help defense. When UMES drivers had open lanes, a helping BC defender was almost always in position to cut out the threat. The helping defender could easily force a turnover, a contested shot, or a block on a number of occasions. The best example came from redshirt freshman Johncarlos Reyes, who almost sent a monster help rejection through the backboard.

The help defense did occasionally mean that the Eagles were left out of position, allowing the Hawks to come away with 11 offensive rebounds of their own. In fact, UMES outscored BC 12-8 in second-chance points, a surprising stat considering it had fewer offensive rebounds. The Hawks crashed the boards with passion and took advantage of defensive switches to execute a number of heads-up second-chance put-backs. But on the vast majority of possessions, the Eagles capped off successful defensive stands with a strong rebound, enabling them to get out in transition effectively.

“You need to get stops,” head coach Jim Christian said. “Tonight we got more stops. You can’t run if they score. We got stops and rebounds…that’s how you can run.”

The Eagles pushed the ball at a blistering pace throughout the game. While only 10 of their points were considered “fast-break points,” the effect of pushing the ball was certainly more significant. The UMES defense never seemed comfortable in its sets, and was off-balance for a majority of the game.

Of the Eagles’ 30 field goals made on the night, 22 of them were assisted. The BC offense was at its best when it was sharing the ball with pace and getting its big men involved. Passes to the interior sucked in UMES defenders, leading to quick kick outs to perimeter shooters. Despite shooting just 30 percent from beyond the arc, BC created a number of clean looks at the rim for perimeter shooters, a welcome sign for a struggling team.

The one thing that plagued the Eagles all night was the presence of seemingly rushed and unnecessary turnovers that might have proved costly against a higher quality opponent. BC ended the night with 16 turnovers, which consisted of a combination of heads-up defensive plays from a very quick UMES defense and careless mistakes. It seemed as though BC occasionally became too caught up in pushing the ball down the floor leading to a number of sloppy passes that bounced off hands or were deftly picked off by expectant Hawks defenders. In a game like this, against a small conference team, this deficiency can easily be swept under the rug. As the Eagles move forward to conference play, however, they will need to take better care of the ball.

With ACC opponents waiting in the wings, it is imperative that the Eagles use these games as a way to work out the kinks. While it may impose its will against UMES, BC will have a much tougher time with the top teams in the nation’s best conference. But Christian insists that he isn’t intent on worrying about the future.

“I try not to worry about ACC play until ACC play starts,” Christian said. “Right now we’ve got to get better by Sunday.”