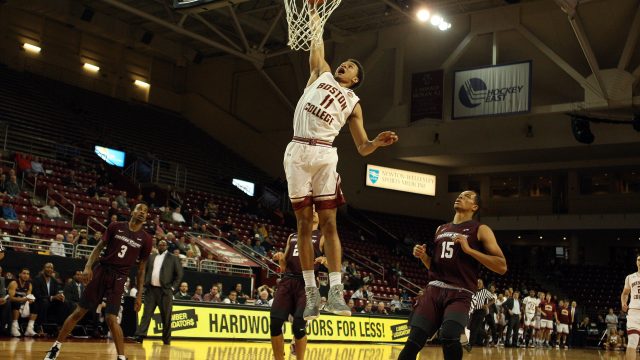 After a troublesome loss to Nicholls State opened the season, Boston College men’s basketball fifth-year transfer Connar Tava took it upon himself to start anew. Beginning with Tuesday night’s home matchup against Maryland Eastern Shore, the former Western Michigan forward played harder than anyone else on the court. Diving for loose balls, boxing out for offensive and defensive rebounds, absorbing contact on the finish, and even dropping dimes, Tava exemplified a kind of energy that was absent last Friday, and that this program has been missing for quite some time.

Tava only hauled in two rebounds in the first game of the season. It took him just two minutes to match that mark versus the Hawks. Aggressively crashing the boards on every possession, the former Western Michigan forward bodied up defenders. And with an and-one conversion 1:40 into the game, Tava broke the only tie of the game, lifting the Eagles to a 5-2 lead—one it would never concede, finishing with a 73-57 BC victory.

He finished with 10 boards on the night, half of which were on the offensive side of the ball. His teammates fed off of his intensity, ultimately out-rebounding the Hawks (0-3) 49-33.

The dominant work on the boards led to transition opportunities. As soon as BC (1-1) controlled each rebound, all five players were off to the races. Often, Eastern Shore struggled to keep up with the Eagles’ tempo, freeing up sharpshooters on the perimeter. BC hit seven shots from behind the arc, four of which came from the hands of Jerome Robinson and A.J. Turner.

Robinson and Turner contributed double-digit scoring performances for the second consecutive week. Despite being inconsistent at times, Robinson’s stroke from mid-range and 3-point range incited offensive runs for the Eagles. In the second half, the sophomore guard hit back-to-back threes from the left wing, forcing the catch-up Hawks to dig deeper into an even more urgent desperation mode. Turner, who head coach Jim Christian said is gaining more confidence, shot 50 percent from deep and 5-of-7 from the field overall. Although the former Rivals 150 recruit high school star only took a handful of shots, he made each one count. Nearing the halfway point of the first half, Turner received a pass, following an Eastern Shore turnover, and euro-stepped past his defender, resulting in a one-handed slam.

Before the season, Christian advertised his unit as the fastest he has ever coached. Yet that speed failed to propel the Eagles to a fast start in their loss to the Colonels. In fact, it inhibited them.

So Christian made an adjustment. He moved Ty Graves, who scored a team-leading 15 points off the bench last Friday, into the starting lineup, replacing Ky Bowman. This way, Bowman, a player who occasionally forgets to put on the brakes, could settle in before contributing off the bench.

Not too far behind the Eagles’ scoring tandem was Bowman. After checking in for Graves, the freshman guard chipped in, according to Christian, “probably the best early stretch he’s had.” Bowman showcased his handles late in the first period, crossing up defenders and sinking shots on two straight possessions. In addition, he tallied four assists on the night. Most notably, he found Garland Owens for a beautiful backdoor alley-oop dunk toward the latter portion of the game.

But Bowman did turn the ball over four times. And it wasn’t just him. The Eagles lost the ball 16 times. Most of the turnovers resulted from sloppy passing and unnecessary finesse play. Christian emphasized that from this point on, his team needs to consider the kind of turnovers it is forfeiting.

Nevertheless, Eastern Shore could not take advantage of these mistakes. After narrowing the deficit to just five points with five minutes remaining in the first half, the Hawks failed to surmount a comeback for the rest of the game. This was largely due to an embarrassing shooting performance, as the team that put up at least 70 points in each of its last two appearances shot just above 36 percent from the field. The only bright spots were Bakari Copeland and Logan Mcintosh. Copeland featured a mid-range and post game that befuddled BC’s defenders, as the senior forward ended with a team-high 14 points. And Mcintosh simply found his touch, hitting 3-of-6 jumpers and finishing with 11 points.

BC’s first win of the season may have come a few days later than many expected, but for the Eagles, the loss against the Colonels and their infamous 2015-16 season are in the rearview mirror.

“All summer we had a bad taste in our mouths, and obviously Friday we didn’t play very well, so it was all about improvements,” Tava said. “We really said the season started today.”