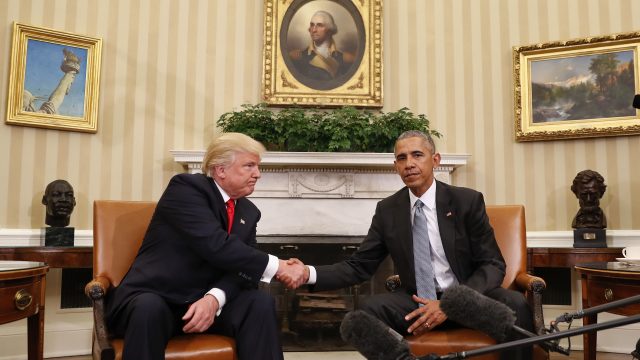 Well. That happened. And no one, it seems, predicted it.

You can add my name to that ever-expanding “unable to predict” list. It was exceptionally likely, I wrote, that Hillary Clinton would be elected president, though I thought that the election would be far closer than some pundits and pollsters believed. Well, as I’ve written before—it ain’t over till it’s over, and that certainly held true in this case. As we all know, Donald Trump is now the president-elect of the United States, a statement that would have been unthinkable just this last Monday. Trump’s victory is extraordinary, one of the greatest surprises in American political history, and it will without a doubt go down in the history books. It’s appropriate that this column will be my last for the semester, for Trump’s win is a vindication of everything I’ve been writing since “What is a Conservative?” in September—nay, even since my first letter to the editor last year. Conservatives, admittedly, have to be cautious: Trump is not a conservative—yet his election, like Brexit before it, has so powerfully shaken our liberal elites that the conservative must resist a kind of Schadenfreude! I was not (need I write it again?) a Trump supporter in the primaries, but I have argued long and hard that a Trump presidency would be far better for our country than a Clinton presidency, and in the end the American people agreed.

Why did Trump prevail, overcoming just about every poll and sending pollsters and political scientists scrambling for answers? We have to be cautious here—we always tend to rationalize after the fact. As Jonah Goldberg said the other day on Fox News, “I’ve been eating a lot of crow, which tastes remarkably like black swan.” I highlighted Taleb’s black swan theory in a previous column, and perhaps everybody (myself included) should have heeded the theory more. Wildly unexpected events do happen, more often than we expect, and we cannot measure them scientifically or statistically. Voilà—here we have one, and the world feels like it has flipped on its head. Yet, to make a rudimentary analysis here, I will say that this election is a triumph for the little guy, the forgotten man, the people, often blue-collar workers, who feel forgotten, trampled, and insulted by those in power. These individuals were largely once Democrats, but the Democratic Party, by going the route that you and I hear every day on a college campus, that of socially and culturally liberal elitism, has lost them. Yet they are a powerful group, conservative in the primitive sense of the word—they feel that the little platoons, as Burke so memorably phrased it, of family and community, held together by decency, chivalry, and honor, are being trodden underfoot. Trump is the first spokesman in ages for these people, and they have now sent him soaring to the White House.

We conservatives, who have been so pushed to the sidelines and who now only spy each other in passing in this sea of liberal hegemony, we who are hidden like Homer’s gods in the world of men, now have the chance to smile again. The Republican Party is now, remarkably, on the ascendant, and of all the results of the election this last one is by far the most satisfying. Just about every media personality said—two short weeks ago!—that the Republicans were doomed, in shambles, ruined, had to change or die—and, gee whiz, folks, look what happened! We have kept majorities in the House and Senate, added the presidency, and, with God’s help, will soon have a conservative majority on the Supreme Court. This is wonderfully reassuring of the fact that we do not mindlessly goosestep along to the march of progressivism. Rather, we fight battles that go on from age to age; we have triumphs and routs, victories and failures, and we conservatives lose many battles but never the war; and, though Trump is no conservative, those around him are, and thus we begin our journey down an infinitely better path.

The modern left, in its—ahem—wisdom, has decided not to heed the statements of Obama or Clinton to accept the results of the election and rise above the fray. On the contrary, we are now seeing progressives, many of whom are college age, who have decided not to accept the results of a democratic election and protest in the streets. This is not particularly surprising—vide “Occupy Wall Street” and “Black Lives Matter”—but it is worrisome: when the result is not what the left wants, it resorts to violence on the streets and calls of “Not My President!” To repeat it once more, it seems increasingly likely that this new wave of liberals cares not a whit for the American republican experiment; if they do not get what they like, they will refuse what happened as a fair result and rather protest against reality. So much for a peaceful transfer of power! (In fact, wasn’t this what left-wing commentators were railing against when Trump was down in the polls? How quickly things do change.) This is anarchy masquerading in the sainted name of equality, and it will benefit no one in the long run.

I think, in the end, that the Trump administration, anchored by honest, decent conservative figures like Vice President-elect Mike Pence, will be a force for good in a weary world. It is very satisfying that these columns of mine have ended on this happy note. Let’s see together where our great country will go from here, shall we? Being a conservative is difficult in this progressive and egalitarian age, but the small victories, in the end, make it all worth it.