Home » In Flux: New Perspective and Photos from the Syrian Refugee Crisis 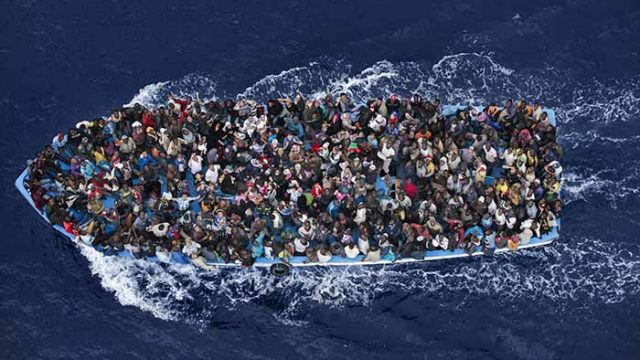 In Flux: New Perspective and Photos from the Syrian Refugee Crisis

To be human is to strive for a better tomorrow. The human soul pays no heed to walls or roads. Boundless and undying, the human spirit prevails in the face of trouble, unafraid, like the first rays of dawn claiming the morning from darkness. As the sun sets on one side of world, there are those elsewhere embodying this ceaseless spirit.

Refugees of the Syrian Civil War have been a complex topic in today’s world, but Jordan Mindlin, MCAS ’17, hopes her exhibit Flux, showing on December 10th in Carney 204A, will help to clearly humanize the endeavors of the nearly 6.5 million people displaced by the conflict. Mindlin is not yet sure where the exhibit will be on display. Through a dynamic show of photos, video, and other forms of media, the exhibit is a testament to the human will, bringing an individual touch to those often viewed as a horde of faceless migrants. (Mindlin is a former graphics editor for The Heights).

The title Flux represents the flow of migrants and refugees, and also speaks to the flow of ideas from artists like Mindlin.

In choosing such a topical and heavy subject matter, Mindlin hoped to combat a sense of aversion to the topic. As she explained, it can be easy to turn away from news about refugees, as it is emotionally charged and politicized.

“I thought that having another way to express what was going on and raise awareness about the subject matter would be helpful and something that I would want to explore more,” Mindlin said.

The art of the exhibit is meant to show and visualize the history unfolding before our eyes, rather than offer commentary on it.

Mindlin explained it would be very easy to say, as is often said in the media, that the events are horrible. It would be hard to argue that the displacement of so many from their lands and homes would be anything but. It is of considerably more import, then, to bring a face to these peoples and their struggles.

“We look at all these migration patterns and we almost forget that these are real people,” she said.

Facts and statistics are used to supplement the larger ideas of the exhibit, diffused in a non-intrusive way. For example, 59.5 million people were displaced at the end of 2014, compared to 51.2 million at the end of 2013, a change in part spurred by the onset of the Syrian Civil War in 2011, according to data from the United Nations High Commissioner For Refugees.

Mindlin finds that there is no need to say explicitly or overtly, “Think this,” but rather point viewers in the direction of the unadulterated reality of the situation. Though the exhibit is to be supplemented with statistics about those displaced around the world, the elevation of the human element remains paramount.

“I am trying to get people to look at this in a different way,” Mindlin said.

Elaborating on the background of the exhibit, Mindlin explains how  the media often portrays such events in terse terms, which can lead to the diffusion of empathy. Fostering a meaningful dialogue by looking at facts and at the human elements, is key to spurning change. Rooted in her own sympathy, Mindlin’s Jewish heritage fueled these sentiments, as this story details hardships similar to the historic migration of Jewish people.

Photos of the damage done to the infrastructure of Syria will be used to frame the world Syrians are fleeing. The broken-down walls, blocked roads, and destitute nature of the country are ample reason to justify flight. The more emotionally pressing images, however, are ones documenting Syrians on their journey beyond their broken country.

The exhibit will contain images of boats inundated with refugees making their way to shore, floods of people surmounting hills, and the sheer size of the camps housing the masses. These images illustrate the volume of people that this situation has affected, but their presence carries with it the unseen aspects of food, shelter, and resources needed to sustain a populace of such size.

Though these images are striking in their own right, Mindlin finds that the photos of more merit are those that focus on individuals among the crowd. The expressions onthese individuals’ faces are pointed. Their unique experiences are reflected in their image, and yet these singled-out details and people also lend themselves to explaining the greater conflict the group as a whole must endure.

A video will play containing two separate reels of film. The first segment will be one released by the Syrian tourism board. As it tracks long stretches of beach and resort properties aerially, the scene is set as one of merriment and prosperity. Immediately following this video, a second will play, chronicling the damage wrought on buildings and metropolitan areas. Filmed using the same kind of aerially tracking shots, the juxtaposition will offer a stark contrast between aspiration and reality.

More abstract and dynamic images come into play for this exhibit. The title of the exhibit, Flux, will be projected onto a wall. On a black background, the large letters will contain a video of a beach front with the tide rolling in and out. Within the same letters, chainlink fence will seemingly separate the viewer from the beach.

Mindlin explained that this is representative of the reality of the lives of refugees. As so many make their way to foreign lands by the sea, the image is a kind of reversal. The refugees hope to be on that side of the fence, looking out at the sea—not trapped behind it among the rolling tide.

An additional element to be present in the exhibit is a display of paper cranes hanging from the ceiling. Each crane is supposed to be representative of the refugees. The form of a crane was chosen for several artistic and symbolic reasons.

“Cranes are symbols of hope and happiness,” Mindlin said. “They sit on top of the water.”

The form of the crane is symbolic of the hopes of the refugees as they sit, waiting for admittance into a host nation.

The exhibit is set to explore one of today’s more pressing crises in a meaningful and compelling way. But, Mindlin is quick to point out that this exhibit and this crisis is but one of many.

By displaying information, both factually and abstractly, Mindlin is engaging viewers on multiple mental levels, demanding the utmost integrity when tackling such a profound human plight. Mindlin hopes the exhibit will be one small spark to ignite a larger conversation.

The premiere showing of the exhibit will be from 1-4 p.m. on December 10th in Carney 204A.

“If you are passing by this one day, maybe you don’t know I am putting this on, but you see the cranes hanging from the ceiling and say, ‘That is beautiful,’” she said. “Then I hope you look closer and see this has another meaning.”