Home » LTE: A Response to “Not Your President?” 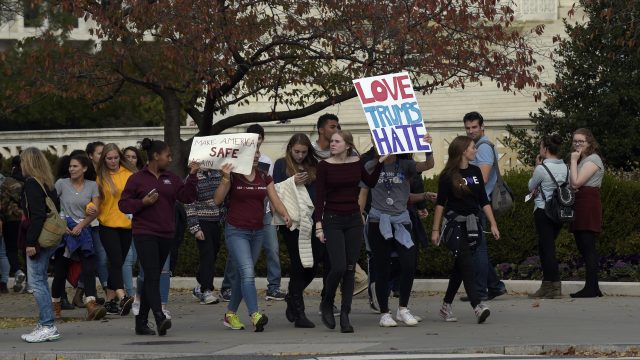 LTE: A Response to “Not Your President?”

Mr. BeDugnis, you have a fundamental misunderstanding as to why these protests occurred. I attended the one in Boston Common last Wednesday, and I’ll try to explain. There was no intention to remove Mr. Trump from the presidency. Instead, the purpose was to take a stand against his policies. If we’re to take Mr. Trump at his word, there’s little reason to be optimistic. His proposed policies and rhetoric are hateful and target marginalized groups. Since the election, there has been a spike in hate-based crimes and incidents. I refuse to be complacent in the face of such despicable behavior.

You also take issue with protesters who promise to block Mr. Trump’s policy initiatives. I don’t know which political party you belong to, but let’s take a moment to evaluate Republicans’ actions. Since President Obama took office, Republicans have used the politics of obstructionism to block his policies. Congressional Republicans embody this style of governing—or perhaps refusal to govern would be a more appropriate phrase—particularly well. To scorn the millennial generation in particular for saying “he’s not my president” is misguided when it has been the de facto mantra of the Republican Party.

Mr. Trump’s loss of the popular vote has an impact on his mandate to rule. Supporters who live in rural areas tipped the Electoral College in Mr. Trump’s favor. These Americans feel ignored and spurned. They are right to have these feelings. I don’t believe that a Trump administration is somehow the answer to their problems. Further, I disagree with the blame that some seem to place on people who don’t look like them, pray like them, or love like them.

Now, that isn’t to say that all Trump supporters are racists or hateful in any way. In a two-party system, it’s nearly impossible to know why voters cast their ballots. It’s not right to see a vote for a candidate as a full endorsement of that candidate’s views. However, it’s inherently privileged to be able to vote for a candidate who espouses hateful rhetoric at marginalized groups. Privilege is often misunderstood, but is defined as a set of unearned benefits given to people in a social group. To be able to put aside Mr. Trump’s comments throughout this election cycle is the ability to say, “that does not affect me enough to vote against him.” Many people throughout the country weren’t in a position to be able to say that. You wrote that protesters are separating themselves from people who voted for Trump. You’re right. I recognize that we’re a large and diverse country that isn’t going to agree on every issue. Expressing disagreement is healthy and, in this case, imperative for the betterment of this country.

Instead of condemning protesters, perhaps you could honestly consider why you didn’t feel called to attend a protest. For those who did, it wasn’t a matter of whining or protesting reality. It was a sign of solidarity and a promise to choose love over hate.

lte
The State of Rap
Happy Thanksgiving From the Editors