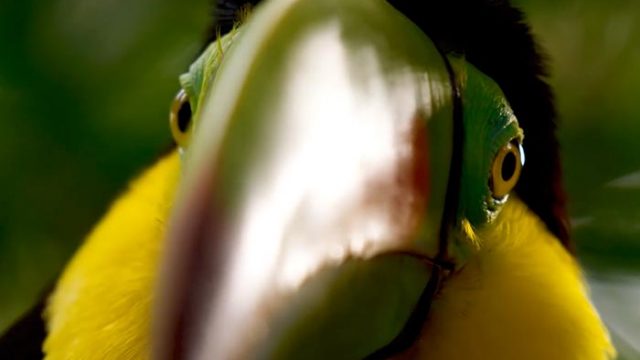 Five stars isn’t enough praise to describe the success of Planet Earth II. After a nearly 10-year absence from the documentary-style film scene, Planet Earth has finally made its long-awaited return in the form of a sequel, Planet Earth II, an episodic version of the documentary so dearly loved by its viewers. It’s everything fans had hoped for and more. Its only downfalls are that technically it hasn’t been released in the United States yet, and that it is released one episode per week, which means viewers are unable to cater to the needs of our binge-watching habits.

Sir David Attenborough, Planet Earth’s producer, promised “unparalleled” cinematography in Planet Earth II. Frankly, even that is an understatement. The trailer for Planet Earth II was nothing short of jaw-dropping, featuring footage of sloths swimming through crystal blue waters, monkeys leaping between rooftops, penguins surfing tsunami-sized waves, even two golden eagles battling it out with their talons. If the trailer itself is a work of art, imagine what an hour-long episode holds in store.

Planet Earth II is the result of 117 filming trips in nearly 40 different countries. The newest UHD and HDR formats were used in conjunction with ultra-lightweight cameras and drones, enabling the crew to capture wildlife in a much more immediate and intimate form than ever before seen in cinematic film. By using remote-controlled cameras, the crew not only could film animals just inches away, but strategically put cameras in places where it would be impossible to put a camera-man.

The many ways animals also take part in the production is amazing, as cameras are triggered by their movements. As a testament to the game-changing technologies, episode two, “Mountains” captured the living habits of snow leopards on camera for the first time.

According to producer Mike Gunton, the snow leopards “were filmed on the end of a telephoto lens about a kilometre away. What we’ve done is go back to the same location and stake it out with dozens of these remotely-operated cameras.”

The effect is that although only four snow leopards live within 40 square miles of each other, with this technology the crew was able to capture four leopards on camera at once.

Attenborough says of the cinematography that these kind of shots just simply weren’t possible 10 years ago, which is to say that in a large way the success of Planet Earth II lies in its shock value. It’s nearly God-like, in a way that not only says, “let’s try to put the vastness of the earth into perspective,” but “let’s put ourselves in the perspective of a species that is not our own and distinctly not-human so that we might understand the Earth better.”

If you think you’re in for a boring documentary about Earth and its various species, characterized by dull, monotonous background narration, think again. You’re in for a cinematic masterpiece. Each episode is titled for what geographic landscape it explores, the pilot episode being “Islands” and the following, “Mountains,” for example. Each landscape has its own stories, and each species its own narrative. Sir Attenborough does well to give each species a voice so as to tell their stories appropriately. Though sometimes his narration assumes a lot from his audience, Attenborough’s descriptions serve as the best way to engage the audience.

What if we were a newborn marine iguana on the run from a pack of racer snakes or a sloth desperate to find its mate, but swimming oh so slowly at our top speed? Well, Planet Earth II takes us there. Though Planet Earth and other Attenborough documentaries have always sought these kind of quotidian, mini-narratives in nature, Planet Earth II is the first of its kind that has the technology to really capture this drama.

The fact is, nature is more than meets the eye. Though this message may seem trite, the goal of Planet Earth II is to say exactly this. But rather than tell, it shows us exactly what we’re missing. Though at the start of the series it may seem that Planet Earth II’s only goal is to strike awe into its viewers, it’s clear that the series is slowly moving toward a focus on humanity’s impact on the natural world and perhaps, at the series’s end, to have inspired a new generation of nature-lovers.