Sometimes, when I have a particularly busy week, I can only find solace in writing down everything that I have going on. Inside the blue planner that my brother gave me, I cram the little boxes that represent each day with the assignments and meetings and events that I have. I separate each specific reminder with a short dashed line, and sometimes I even write each assignment down in a different color. I guess the variety just adds a little bit of pizzazz.

After I finish writing everything down, I’ll just stare at those little boxes that I’ve filled to the brim with papers and tests and quizzes and marvel at just how much I have to get through in the next few days. And I don’t even have the worst of it! At this university, where students can range from spectacular underachievers to people who are more brilliant that I can even imagine, I probably fall somewhere in the lower-middle. I put effort into my work, but there definitely isn’t a chance of you mistaking me for a genius.

But when I stare at the little boxes of my planner teeming with assignments that I have yet to begin, I actually don’t feel the sense of panicky stress that you might imagine. Instead of my throat tightening and the clenching of a knot in my stomach, I feel a weird sense of satisfaction.

Ha, I think to myself, look at all this. You see these boxes? I have every right to think that my world is mere seconds from imploding.

Instead of fear, I feel a sense of righteous justification. Do I have any reason to feel anything close to justification? Most definitely not. Just writing down everything that I need to complete doesn’t actually guarantee that I will get it done. Even if I do get everything done, what’s to say that it’s done well?

The fear, and the tightening of the throat, and the tight grip of stress—that all comes once I close my planner. Although it may seem counterintuitive, being unable to see everything neatly written down inside those tiny squares makes my assignments hover over my head like some kind of invisible menace. And if I can’t see the problems that I have to tackle, how can I even begin to slowly tackle them?

Unfortunately, following the results of last week’s election, the problems that people have been facing across the country are problems that carry infinitely more weight than the assignments that I write in a tiny box and immediately forget once they are complete.

So I was shocked when the people of Boston actually began writing their real problems down inside of slightly larger (but still relatively tiny) squares last Friday night for an event titled Subway Therapy Boston. Inspired by similar Subway Therapy events popping up across the New York in wake of the announcement of Trump’s presidency, Subway Therapy Boston began in the Park Street T stop at 9 p.m., just after the nearby Love Rally in the Common drew to a close for the night.

With volunteers providing sticky notes and brightly colored chalk, organizers of the event invited Bostonians to write messages of love and support for those who felt marginalized by the election’s results. On the sticky notes, some wrote short messages reminding readers that love always wins and that we cannot normalize bigotry, while other participants drew simple doodles of hearts, peace signs, and safety pins. The countless sticky notes were stuck around the station’s platform, creating a colorful mosaic against the white-tile walls.

With the chalk, organizers encouraged people to decorate the outside of the Park Street stop with even more election inspired messages. By the end of the night, these chalk messages had spread from the T stop’s walls to cover all of the nearby sidewalk. There was no missing them.

Subway Therapy made a lot of sense to me. It gives people a platform to make physical and real problems that might seem more conceptual. And once the problem takes a form—even if that form is just words in a box—it becomes something that we can slowly begin chipping away at.

Sometimes, once you can see a nightmare, it loses just a little bit of its power.

park street subway therapy boston
The Bitter End
I Open at the Close: Why We Write 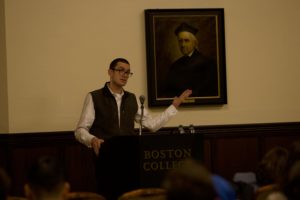