Home » Previewing BC Basketball 2016-17: What to Expect From Stony Brook
Men's Basketball

Previewing BC Basketball 2016-17: What to Expect From Stony Brook

A one-and-done performance in the NCAA Tournament is typically considered a disappointment for most teams. But Stony Brook men’s basketball’s loss to Kentucky in the opening round of last year’s tournament proved to be an exception. After capturing the America East regular season and tournament championships and clinching its fifth consecutive 20-win campaign, the team earned its first bid to March Madness in school history. The Seawolves (0-1) were finally part of the Big Dance—a foreign experience for this decade of Boston College basketball.

The two opposite trending programs will meet in Conte Forum on Sunday afternoon. It will mark the start of Stony Brook’s four-game road trip, which includes a visit to College Park, Md. next week. In its home debut, the Seawolves underperformed against Columbia, shooting below 40 percent from the field and 30 percent from 3-point land. Having lost their top-three scorers from this past season and their head coach, Steve Pikiell, to Rutgers, the team appears to to be trying to find its identity.

An identical problem confronts BC (1-1). After this week’s victory over Maryland Eastern Shore, head coach Jim Christian acknowledged this concern.

“We know who we want to be,” Christian said. “And I think we show it at times.”

Christian wants his squad to utilize its athleticism on both sides of the court, but more importantly, to play hard. BC has looked like a different team in each of the first two games this year. When the Eagles were defeated by Nicholls State, their lack of energy was evident from tipoff. Consequently, they conceded a 16-1 run to begin the game. A deficit which proved to be insurmountable, even for BC’s hyped run-and-gun offense. But the mentality changed when Eastern Shore came to town.

Led by fifth-year graduate transfer Connar Tava, the Eagles featured an unrivaled intensity from the minute they stepped on the court. Crashing the boards and hustling for loose balls, the young team displayed a will to win, ultimately leading to its first victory in the calendar year.

If BC wants to spark a winning streak, it will have to do a little more than just playing hard—the energy level is simply the foundation of a winning culture. Mo Jeffers, Tava, Johncarlos Reyes, and Nik Popovic must win the battle on the boards. While BC out-rebounded the Hawks 49-33 in its last performance, it gave up several second-chance opportunities. And keep in mind that a third of the Seawolves’ points (22) against Columbia resulted from second chances. Controlling the glass will enable the Eagles to push the pace of the game.

Although BC’s offense is molded to the transition game, point guards Ky Bowman and Ty Graves must be conscious of when to slow the tempo. These freshmen guards, especially Bowman, have turned the ball over numerous times, as a result of bolting down the court without any sense of where their teammates are. Whether it is a travel, walk, or an intercepted pass, these turnovers shift momentum.

Christian has noted that he wants his team to have at least 70 possessions and no more than 12 turnovers per game. So far, it has forfeited the ball 16 times in both games. Sunday will be another test, as Stony Brook forced the Lions to turn the ball over 14 times.

Defensively, BC made some much-needed adjustments coming off its loss to Nicholls State, in which the Colonels shot 49 percent from the floor, and three players finished in double figures. By fortifying the paint and contesting outside shots, the Eagles held Eastern Shore, a team that had surpassed the 70-point mark in both of its first two games, to just 57 points and 36 percent shooting.

BC must continue to maintain the same quickness it exhibits on offense, when protecting the basket. If the Eagles can disrupt the Stony Brook shooters, the Jerome Robinson and AJ Turner-led attack could string together a handful of offensive runs, just as Columbia did.

Despite being inconsistent on occasion, BC possesses an assortment of perimeter marksmen. Graves, Bowman, Robinson, Turner, and Jordan Chatman can all pull up and knock one down from behind the arc at any point of the game. That being said, the Eagles need to value ball movement. Rather than just bringing the ball up and launching a three from the top of the key, BC must take advantage of its off-ball rotation skills. As seen in its win over the Hawks, letting the play develop eventually leads to a wide-open backdoor pass, corner three, or just a mismatch in the post or on the outside.

Stony Brook is 0-7 all-time versus ACC competition. Its fate will be determined by which BC team decides to suit up. Before the Eagles can even dream about an NCAA Tournament or a 20-win season, they need to figure out what kind of team they are. 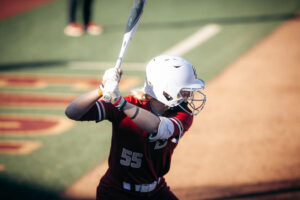