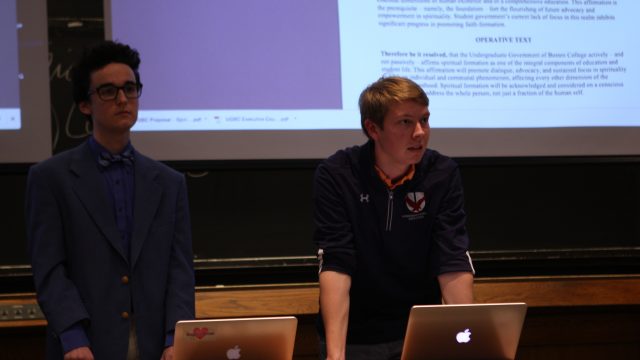 In a meeting Sunday night, the Undergraduate Government of Boston College’s Student Assembly (SA) passed two resolutions: one called for the building of a student center and the other affirmed spiritual formation as a prominent component of education and student life.

The first resolution, the student center, passed unanimously. The resolution establishes no official approval, plan, or budget for a center, but rather encourages the Board of Trustees to prioritize it.

Drew Boland, CSOM ’19, and Caroline Monnes, MCAS ’19, co-sponsors of the student center resolution, highlighted that BC is the only top-30 university currently without an established student center or one under construction. The resolution says that without a central place for students to gather on campus, the University is not fulfilling its promise to advance dialogue through community life, which is mentioned in BC’s mission statement.

A student center has been intermittently included in UGBC’s agenda since at least 1995, when BC got so far as to draw up plans for a new building, and was also a goal in 2005, when, according to the resolution, a center again reached blueprint stages.

Jones, who has helped lead the building of a similar center twice in her career, most recently at Miami University in Ohio, said the student center would go in the place of the Flynn Recreation Complex, which will come down after the University opens an athletic center in the place of Edmond’s Hall. The athletic center is part of a $200 million plan that includes updated facilities and fields. Carney Hall is also supposed to come down at some point, Jones said.

Jones said she hopes a student center would free up space for other campus initiatives, like the Career Center, which currently doesn’t have enough space for interviews—companies use staff members’ offices instead of designated rooms. She also brought up the possibility that the University’s Division of Mission and Ministry could use some of the space, and the center would be home to student resources. The goal for the building would be, at minimum, a Silver LEED certification, a measure of buildings’ eco-friendliness that was attained this year by the recently opened 2150 Comm. Ave.

Hagop Toghramadjian, MCAS ’17, expressed concern that UGBC asks for a lot, and that this project could be a logistical and financial challenge. In a question-and-answer session Tuesday night, Provost and Dean of Faculties David Quigley said a student center is probably his second priority in terms of campus construction, with the first being an additional facility dedicated to the sciences. BC Law School is also apparently interested in moving to Main Campus. Quigley said one of the major struggles is permitting, which often must be obtained from the City of Boston.

The second resolution, postponed and rewritten after an SA debate last week, affirms spiritual formation as a prominent component of education and student life. Sponsored by Michael Proietta, MCAS ’19, and Raymond Mancini, CSOM ’19, the resolution is meant to promote reflection, advocacy, and dialogue on spirituality among students of different faith backgrounds, with a particular mind toward cura personalis, the Jesuit ideal of care for the whole person. The goal specifically is to focus more on spirituality in some UGBC programming—Proietta said a film about Syrian refugees screened recently by UGBC’s Faith & Spirituality branch was focused more on social advocacy.

“Along with supporting spiritual groups it’s providing an avenue for dialogue that might not exist currently in the formal setting of faith organizations and Campus Ministry,” Proietta said.

The SA voted to delete the final sentence of the resolution, which read, “Spiritual formation will be acknowledged on a conscious level in order to address the whole person, not just a fraction of the whole person.” Monnes suggested the deletion out of concern that the language could potentially isolate or alienate some students who don’t identify as spiritual. The SA eventually voted to remove it, however, and in the full resolution vote three members abstained, and two—Connor Kratz, MCAS ’18, and Jay Chen, LSOE ’19—voted no.

Prior to the vote, Josh Frazier, MCAS ’19, said that he didn’t have a problem with the wording of the resolution, but he was worried that it was unnecessary because it didn’t change UGBC’s current approach to programming. He mentioned in particular an event hosted by the GLBTQ Leadership Council last month that featured an openly transgender Episcopal priest.

“It might feel pointless to a few people here, but I think the fact that so many people have spoken passionately about this resolution … is reason enough,” Toghramadjian said in response.

“There are many people that I’ve talked to who feel that UGBC does not represent them, that UGBC is in fact opposed to them,” Toghramadjian said. “We are not a fringe advocacy organization. Our power, and our moral authority, when we take a stand on something like LGBT rights, the reason it’s so powerful when we do that is because we’re a mainstream student organization. If we relegate ourselves to representing the concerns of minorities on campus, then we lose a lot of our moral authority, so I think there’s nothing wrong with affirming what might be a widespread or perhaps majority concern.”

UGBC student assembly bc student center
LTE: Another Response to “Faculty FitBit Competition May Step Over the Line of Fair Play”
Women’s Basketball Falls to 1-3 After Loss to St. Mary’s