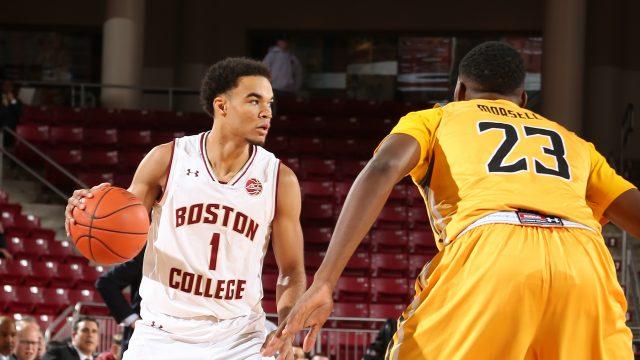 “Take the game over, Jerome! It’s your game, Jerome!”

A raucous but small crowd, hampered by the impending Thanksgiving break, screamed out at Boston College men’s basketball. Towson had just taken the lead with 10 minutes to go. The Eagles’ pristine shooting performance in the first half began to collapse. The fans needed Jerome Robinson, their star guard, to prevent another nightmare in an athletics year already full of them.

Given BC’s play over the last few seasons, it had already appeared too late.

Vegas hadn’t taken too kindly to the Eagles’ season-opening loss to Nicholls State at home. And the Tigers had just given No. 24 Maryland a scare in College Park, and they were rewarded for it.

Tuesday’s opening line: Towson, three-point favorites, on the road, in an ACC arena. When have you ever seen that?

Robinson hadn’t, and he didn’t like it. So when the Tigers took the lead, Robinson answered the fans’ calls. He took over.

En route to a career-high 24 points—the second time he had set a new mark in as many games—Robinson flipped the script to a BC victory long after the expected ending had been written with one slam dunk. With the crowd in a stunned silence, Robinson drove down the middle of the paint and posterized Towson’s Alex Thomas to help BC regain that lead. He then hustled back on defense and immediately took a charge, making both free throws. That one play sequence changed sure defeat into a 80-70 win at Conte Forum.

“That’s what you want from your best player,” head coach Jim Christian said. “He had a huge baseline pull-up and took a charge. That was a huge part of our game plan.”

But it wasn’t just Robinson that gave the Eagles (3-1) a happy ending heading into the Barclays Center Classic in Brooklyn this weekend. The team as a whole used a stellar first half shooting performance to stave off the Tigers’ (2-2) dangerous duo of Mike Morsell and William Adala Moto.

As a unit, the Eagles shot an impressive 61.5 percent from the floor, a number which had been high as 70 percent with 10 minutes remaining in the first. Robinson had 12 on 5-of-9, largely with high-percentage layups. Jordan Chatman played a huge role in that success, scoring eight straight off the bench with mid-range jumpers and a big transition 3-pointer.

Connar Tava turned in the best overall performance of the half, and perhaps the best game of his young BC career. He finished with 13 points and eight boards as he worked effectively inside. Tava made strong cuts to the basket, calling for the ball from inbound specialist A.J. Turner even with a man heavily on him. When he had a look, Tava made smart plays and wasn’t denied.

“I thought [Connar] played his best game since being here today,” Christian said. “He rebounded the ball well and he guards well.”

The same struggles that plagued BC against Stony Brook on Sunday, however, arose against Towson. When the Eagles would get ahead big, whether with cocky stepback 3-pointers from Ty Graves, electric dunks from Ky Bowman, or alley oops to Robinson, they’d take their feet off the pedal and let the Tigers claw back.

That soft play allowed Towson to regain the momentum into the second half to take that early lead. While the Tigers were shooting hot, BC simply wasn’t getting anything to land—at one point, the Eagles were 2-of-10. Yet Christian noticed a difference with his group this time around, something fans hadn’t seen last year.

“When [Towson] took the lead, there weren’t any heads down,” Christian said. “There was just talk of what they needed to do to fix the defense, and they did it. We went out and scored and they executed very well.”

It’s impossible to know what the Eagles discussed as the key to winning as they remained focus. But chances are, it was dominating at the free-throw line.

Christian’s BC teams have been known to struggle at the charity stripe. Last season, BC was 327th of 351 in the nation at only a 65 percent conversion on free throws. The Tigers knew this, and weren’t afraid to put the Eagles on the line—have them make the mistakes themselves.

Only this time, the Eagles didn’t make any of those mistakes. They were a perfect 20-of-20 from the free-throw line in the second half. Bowman Robinson, Tava, and Chatman all played huge roles in locking it down. That helped to mask a poor 7-of-24 shooting performance brought on by foul trouble that forced Robinson to play the point with Chatman at shooting guard. According to Turner, free throws were the major focus of this team over the last 48 hours.

The two teams continued a back-and-forth flow until Christian drew up a play with about two minutes to go. After a turnover by Morsell, Nik Popovic, the team’s rookie big man, was supposed to get the ball in the corner. After faking the handoff, he was supposed to drive to the hoop. Instead, nobody guarded the 6-foot-11 center in the corner. Popovic isn’t one to shy away from that shot, so he put it up. That 3-pointer sealed the game for the Eagles.

“He hit that three instead, so you know what, I’ll take that, too,” Christian said with a laugh.

Like this season, that play wasn’t drawn up how Christian imagined it. But if his team can improve incrementally the way it has shown over the last few games, his imagination may be stretched beyond his wildest dreams.