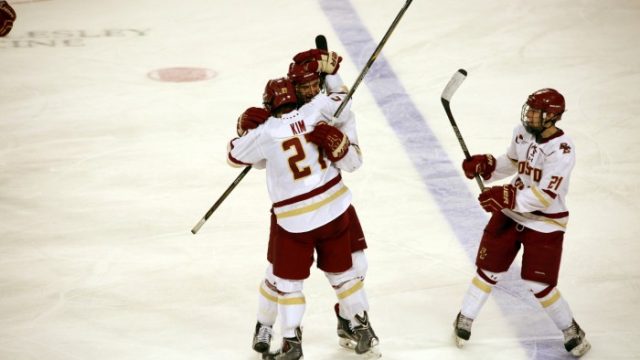 BOSTON — Casey Fitzgerald slammed his stick down and screamed at the glass. He knew what the Dogpound—louder and prouder than ever—knew: another late penalty will seal this one for Northeastern.

It’s not like Fitzgerald was the only culprit for Boston College men’s hockey on Tuesday night. The Eagles had seven penalties that led to power plays for the Huskies, compared to only two for NU. Whether all were legitimate is irrelevant. Hockey East’s infamous referees thought BC—the third-most-penalized team in the nation—deserved more time outs.

But head coach Jerry York has been down this road before. He knows that there are ghosts who live in the famed Matthews Arena. Every once in a while, they creep onto the ice to bless or curse Northeastern. You can hear them in the creaks of the seats, the whir of the Zamboni, or sometimes in the Dogpound’s chants of “Stacy’s Mom.”

“It was quite a college hockey game,” York said. “I’ve been here a lot of years, and it never ceases to amaze me how the ghosts of the building bring out the best.”

York heard the ghosts come out on Tuesday with a loud ping—though that could’ve just been Michael Kim’s shorthanded game-winner.

For the second year in a row, the Eagles stole a game from their historically maligned crosstown rivals on St. Botolph Street. Last year it was because of Matthew Gaudreau. This year, Kim—the sophomore blue liner from Ontario—cursed NU in a 2-1 final to help BC remain undefeated in conference play.

It was the least Kim could do. He feels BC was in that situation because of him.

For much of the game, the Eagles (12-4-1, 7-0-1 Hockey East) had survived with a man down against Hockey East’s second-best power-play unit. Northeastern (5-6-4, 1-5-2) attacked Joe Woll with a strong first-team unit of Zach Aston-Reese, John Stevens, Dylan Sikura, Adam Gaudette, and Garrett Cockerill. Woll finished the game with 24 saves, and had a sharp performance—perhaps the best in his young college career. Yet York attributed much of that success to his defense’s strong play on the penalty kill. While the goaltender gets a lot of the praise, York wanted to spread that around to the men who come before him.

“Our ability to win the game tonight was a direct reflection of our penalty killing,” York said. “Joe made some exceptional saves, but I thought our stick positioning and blocking of shots was almost like chalkboard.”

Though the Huskies generated only four shots on goal in the first period, each was a high-quality chance. By the time they pumped that up to 11 in the second frame, the Eagles were back on their heels.

The Eagles finally broke through offensively with under a minute to go in the second period. JD Dudek broke away cleanly along the near boards, forcing Ryan Shea to skate in tight. At the last second before the crease, Dudek sent a desperation pass cross ice to Colin White. The sophomore center casually flipped the puck over goaltender Ryan Ruck’s head to give the Eagles a 1-0 lead into the locker room.

Yet, because of Kim, that lead wouldn’t last very long.

Gaudreau took a hooking penalty only 1:22 into the third period. The Huskies had struggled all game long to gather momentum on that unit, but Kim accidentally abandoned Sikura on the left circle. The miscue allowed Sikura to dish the puck to Cockerill from the blue line. Aston-Reese cleaned up his rocket shot, knotting the game at one apiece. Frustrated with himself, Kim determined to make good on his mistakes.

“The first goal they scored was my fault,” Kim said. “So I just told myself, I had to get this back.”

Kim almost didn’t get that chance. With under two minutes remaining, Fitzgerald got called for interference, putting the pressure on the Eagles to do whatever they could to force a tie.

But Kim saw an opening. He watched as Stevens mishandled a dump back to Aston-Reese at the blue line. That brief window gave Kim the opportunity to cause havoc and steal the puck away. The play caught Cockerill flat-footed in front of Ruck, with his stick on the wrong side to stop the shot of the left-handed Kim. By the time he brought it around, Kim had already heaved up a desperation attempt.

Kim might call it puck luck. But York knows better. It’s the ghosts of the Matthews Arena. And this time, they blessed the Eagles.