After DACA Statements, Walkout Asks for Further Support of Undocumented

Eradicate Boston College Racism held a walkout on Thursday at 3 p.m. Around 75 students and faculty gathered on O’Neill Plaza to call for additional actions from the University, in the wake of the election of Donald Trump to the presidency, to support undocumented students and workers by becoming a sanctuary school.

The walkout came two days after University President Rev. William P. Leahy, S.J. signed two documents in support of Deferred Action for Childhood Arrivals (DACA), which helps protect undocumented students from deportation efforts, and three days after Eradicate released a petition with 16 recommendations that called for the University to protect undocumented and marginalized students. Trump could repeal DACA, an executive action signed in 2012 by President Barack Obama, when he takes office next month.

Eradicate expressed hope that the University would sign an additional statement, released this week by the Association of Jesuit Colleges and Universities, that similarly agrees to support undocumented students. As of Thursday night, BC is the only one of the 28 U.S. Jesuit universities not to have signed it.

The walkout was part of a nationwide walkout that took place at universities across the country on Thursday organized by Movimento Cosecha, an activist group that aims to protect marginalized groups. Eradicate had planned to participate since at least the week of Thanksgiving.

Eradicate handed out signs to students and faculty as they joined. The signs read, “President Leahy protect our undocumented” and “DACAmented.”

“Please reach out to others. Work in structural ways to make sure this campus responds. Let’s make change.”

Kevin Ferreira, a member of Eradicate and GLSOE ’19, said that Dean of Students Thomas Mogan asked him not to use a megaphone because it would disrupt the classes that were still in session. University policy on amplified sound is that it is only approved for use after 4:30 p.m. Ferreira agreed to take the blame for his own use of the megaphone at the rally.

Eradicate did not receive a permit for the walkout from the Office of the Dean of Students. Mogan said in an email yesterday that he had reached out to Eradicate, an unrecognized group, about getting a permit, but received no response.

Ferreira said that BC’s becoming a sanctuary campus would mean that the University would work to protect and support undocumented students. This would come via legal help, medical services, and mental health services, as outlined in the petition.

“This is the first step,” he said. “Please reach out to others. Work in structural ways to make sure this campus responds. Let’s make change.”

Maria Cristina Fernandez, WCAS ’20, spoke about seeking refuge in the United States when her family fled Guatemala two years ago. Her mother, who was a judge in the country, spoke out against corrupt leaders. As a result, she and her family received death threats. They decided to leave their home, their family, and their friends to come to the United States.

Since arriving in January 2015 and joining the BC community the next fall, Fernandez has re-found a sense of safety.

“I learned to breathe again,” she said.

Fernandez does have American citizenship, but she hopes BC can continue to be a place of security for all students.

”I believe that BC, as a Jesuit, Catholic, Christian institution, should protect the members of this community by being a sanctuary campus and giving them the respect, freedom, and peace of mind that the community members deserve,” she said.

Correction: An earlier version of this article incorrectly stated that Ferreira agreed to take the blame for all students using the megaphone at the walkout. He only agreed to take responsibility for his own use. The article has been updated to reflect this. 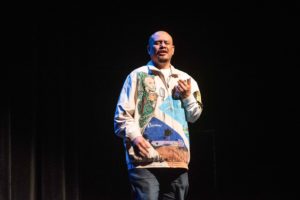