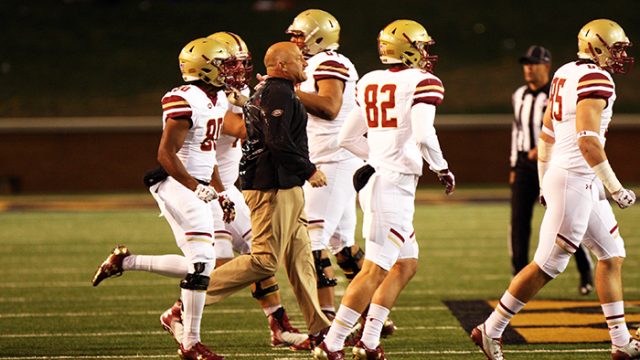 On Friday, Boston College football added another home-and-home series to its future non-conference slate, scheduling a pair of games against Rutgers for 2026 and 2027.

FBSchedules.com first reported the news after obtaining a copy of the contract through a public records request. Neither program has confirmed the report yet.

The first meeting will be at Alumni Stadium on Sept. 12, 2026, before the Scarlet Knights host the Eagles in Piscataway, N.J., on Sept. 11, 2027. The former Big East foes have quite a history—the two programs first played each other nearly a century ago and continued the tradition with annual clashes between 1981 and 2004. The Eagles own a 19-6-1 all-time record, but they haven’t faced off since BC left for the ACC in 2005. Rutgers followed suit in 2014, ditching the Big East for the more lucrative Big Ten conference.

The news follows the announcement of future home-and-home series against Missouri and Stanford of the SEC and Pac-12, respectively. The Eagles haven’t played a Big Ten school since 2014, when they lost a heartbreaker to Penn State in the Pinstripe Bowl, 31-30.

Perhaps, in Rutgers, BC sees a little bit of itself. Both have struggled as of late, ranking among the worst Power Five schools in recruiting and total offense. Out of 128 FBS teams, only the Scarlet Knights averaged fewer yards per game than the Eagles.

Scheduling Rutgers also makes sense for BC given its recent recruiting push into New Jersey. Head coach Steve Addazio has put an emphasis on the region, snagging players like Anthony Brown, Jonathan Hilliman, Nolan Borgersen, and Tommy Sweeney from the Garden State.