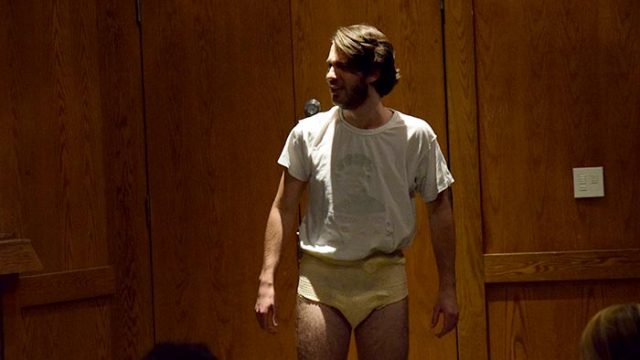 Hello…Shovelhead! Pays No Heed to Offense in Bold Skit Show

A mound of papers reading Hello…Shovelhead! proudly presents … ‘Have You Tried Fruits?’ rested on a table in Fulton 511 on Friday and Saturday night. A lengthy disclaimer on it contained a playful yet important message.

“By entering this show you have temporarily suspended your right to be offended.”

This message is followed by a long and whimsical list of descriptions or categories that a viewer might possibly fit into. For example, it asked for viewers to not be offended if they identify as “a philosopher, Plato, Play-Doh, a theater kid, Ford Theater, Abraham Lincoln,” and so on.

If the handout alone can make you laugh, ‘Have You Tried Fruits?’ has a great time in store for you. The front page of the paper ends with a poignant message: “Check the ‘tude at the door. Sit, back, relax and remember how to laugh at yourself. Cause if you’re not, then, someone else is.”

Hello…Shovelhead!’s fall show begins with a video. Each member of the cast is being driven separately to an unknown location. They speculate to the camera on what television show Hello…Shovelhead! has been requested to be a part of. Finally, they arrive in the middle of the woods. They are greeted by their leaders, and the show they are going to be in is revealed to them. The cast of Hello…Shovelhead! will be doing an episode of Naked and Afraid.

The cast is divided into teams and told to strip down to their birthday suits. What followed was a combination of jokes and utter ridiculousness that had the audience cracking up from the start. The video did a great job at warming up the crowd while also letting the audience get familiar with the different members of the cast. The video ended with cheers and applause from the crowd and, from there, the show began.

But it only gets better once ‘Have You Tried Fruits?’ began its series of skits. One skit that definitely resonated with the crowd was a scene about a camp counselor. It opens with two camp counselors, complete with clipboards and tie-dye t-shirts. A couple comes to them to retrieve their child. They search their clipboards for the kid but are unable to find them. The alarmed parents snatch the clipboards from them, but cannot find a list of names. Instead, the counselors have clipped a CD and a DVD copy of Home Alone 2: Lost in New York to their boards. The parents demand their child and, from behind their backs, each counselor produces another clipboard and begin searching it for the child. The terrified parents rush offstage, promising to call the police and mourning their lost kid—leaving the audience roaring in laughter.

Every skit that followed was met with similar applause and laughter. The cast appears to genuinely enjoy performing and working with each other. The kind of chemistry between the cast in this production is a huge part of what made this show so fun. These great and fun performances can be credited in part to great directing by Casey McLaughlin and Dan Casey, who also do a great job on stage themselves.

Hello…Shovelhead! also makes good use of the few props they include in their scenes. They get through many of their scenes with only a few chairs and whatever hand-held objects they choose. The costumes they wear aren’t extravagant or fancy—in fact everything the cast wears can be found in your closet at home, yet the audience is never confused at who or what a character is supposed to be.

The only criticism that can be offered is that the show didn’t last longer. There was a brief intermission between its two acts, but when the show ended for good, the audience was left wanting more of the clever scenes and witty dialogue from ‘Have You Tried Fruits?.’ The show they put on this weekend was a resounding success and bodes very well for any of their upcoming projects or events in the year.