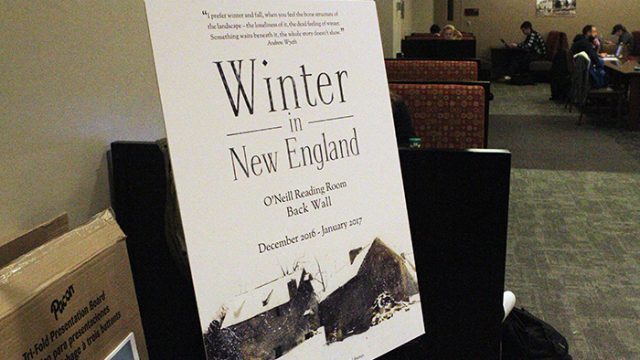 A number of students stroll down Linden Lane, their hands shoved deep into the pockets of their puffy down jackets to avoid the biting winter wind. Leaving a dizzying pattern of fresh footprints in the gently falling snow, two or three of them seem to submit to their inner child in fits of laughter while dodging flying spheres of hand-packed snow. Others opt not to tarry, preferring instead to shield their faces from frigid air and forge ahead in search of shelter. It’s almost winter at Boston College, and final exams compete with the whimsy of falling snowflakes for the attention of an entire student body.

After the sudden click of a standard film camera—and following a few hours of negative processing—this rather ordinary moment is frozen in time. A few decades later, however, the black and white photo sits behind a sheet of protective glass as part of this month’s festive on-campus exhibit, Winter in New England.

Featured among a myriad of other artists’ odes to the holiday season, the photo is just one artistic piece that comprises a temporary exhibit located at the far wall of the O’Neill Reading Room. Celebrating a season full of freezing temperatures and warm, wool clothing, the new exhibit is a creative and oddly calming addition to the popular student study space.

The colorless snapshot is stamped haphazardly with a rough estimation of the year during which it was taken. A vague “1980-1995” is scrawled under the image, the exact date unknown but ultimately rendered unnecessary in an informative visual art and literature exhibit. Featuring time-honored works from Henry Wadsworth Longfellow next to hastily shot photographs sourced from local, unknown contributors, the display showcases an impressive spread of beautiful, season-specific pieces that span several centuries.

Mounted onto plaques that add immense character to the otherwise drab library walls, well-known poems from native New Englanders are displayed for the odd passerby to appreciate. For example, the eloquent words of Emily Dickinson’s poem entitled ‘There’s a certain Slant of Light‘ illustrate the profound bleakness of a cold winter afternoon in Amherst, Mass. Adjacent to this piece is “Snow-Flakes,” one of Longfellow’s stirring “poem[s] of the air,” inspired by nature’s perennial beauty.

To aid art aficionados in forming their own opinion of the extensive art collection, the exhibit also features various plaques offering important factual information as well as brief snippets of literary interpretation. In an effort to describe the collaboration of artists and scientists on the understanding of New England weather patterns, one plaque reads, “Professional and amateur researchers … present us with a detailed record of winter’s features, challenges, and changes.” Through artistic rendering as well as fact-based understanding of the region’s ever-changing weather, the exhibit serves to express an almost universal appreciation for a historically puzzling climate. These plaques, rich in art history and scientific significance, also serve as an explanation for the curator’s decision to include a variety of interrelated artistic media.

The exhibit boasts a number of winter-related excerpts, demonstrating the care with which this exhibit was constructed. For example, a visually stimulating paragraph from Harriet Beecher-Stowe’s Our Wood Lot in Winter suggest the hours poured into extracting the perfect passages from a selection of famous American novels.

Appropriate to the cold blankness most commonly associated with a New England winter, the photographs showcased are developed in black and white. They depict students traversing the winter-ravaged BC campus across several decades, dressed in snow gear and big hair appropriate to the photos’ respective eras. The artistic decision to display predominantly colorless visuals in a winter-themed exhibit puts an equal emphasis on the pictures as it does on the artfully strung words of the featured poems. As a result, viewers are encouraged to analyze both elements of the display and appreciate the cohesiveness created by the incorporation of the grayscaled photos next to meticulously chosen literary works.

The calming aesthetic of the wintery exhibit can be attributed not only to the evocative poems and the candid photos, but also to the detailed winter watercolor images crafted by artist Andrew Wyeth. His works, which offer a muted color palette and beautiful renderings of New England farms and fields covered in snow blankets, date back to the late 1950’s and beautifully portray the more rural areas of New England on a quiet winter’s day.

Complete with watercolors, still photos, and vivid poetic imagery, Winter in New England provides an almost meditative experience, for students are invited to ruminate over winter’s oft-inspiring and snowy embrace. The collection of on-campus photos, critically acclaimed poems, and local almanac articles represent a profound constant about the notoriously ever-changing New England climate. After experiencing the exhibit, viewers glean the following message: No matter what the year and despite the decade, every New England winter promises an opportunity to play, to dream, and to create.

winter in new england
‘Judging a Book By Its Cover’ Explore the History of Printed Tomes
Hello…Shovelhead! Pays No Heed to Offense in Bold Skit Show