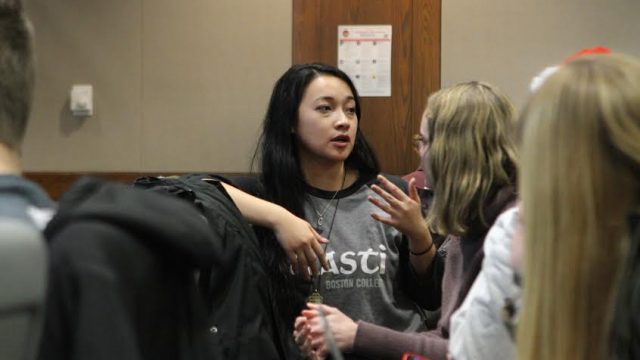 On Sunday, the Student Assembly (SA) of the Undergraduate Government of Boston College (UGBC) passed two resolutions. The first called for BC to become a sanctuary campus. The SA joined Eradicate Boston College Racism  in calling for University President Rev. William P. Leahy, S.J. to take more concrete action beyond his signing of two statements supporting DACA, an anti-deportation executive action that protects undocumented students, on Tuesday. The second of the two resolutions involves the reinstatement of the Bias Incident Reporting Team (BIRT). The purpose of the BIRT project is to establish a specialized unit of administrators to deal with issues of bias regarding “matters of gender equality, LGBTQ+, race, socioeconomic status, immigration statues, religious practices, and ability,” according to the UGBC resolution.

BIRT would also be responsible for research related to bias on campus, which it would then relay to divisions such as the Office of First Year Experience to track patterns of bias. UGBC is asking the University to reestablish this program in order to reaffirm its support for the diverse members of its student body.

One of UGBC’s biggest qualms with the University’s current system for bias incident reporting is a lack of student accessibility to the necessary forms. According to the resolution, there are two ways of reporting episodes of discrimination at BC: through the Dean of Students office and the Office of Institutional Diversity. Both are relatively unpublicized. The resolution proposes that the means for documenting incidents of bias be made available on the Agora Portal for all students.

The prospective movement of the bias incident reporting forms to the Agora Portal would represent an improvement to the administration’s current system for addressing social issues at BC. Providing students with easier and more direct access to these forms would encourage more frequent reporting of discrimination and therefore increased awareness of bias within the University community. Submitting on Agora would also allow the University to verify the credentials of the reporters without jeopardizing their privacy.