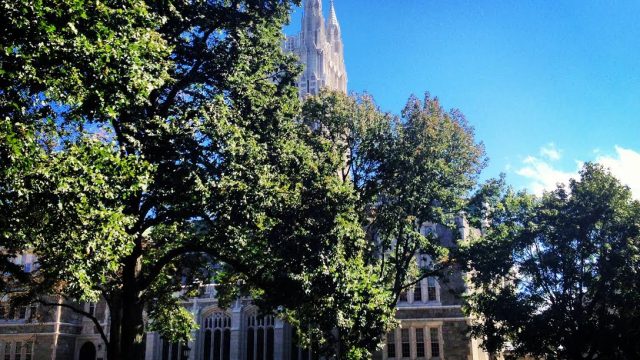 The place of trigger warnings and safe spaces in the university system has long been a hotly contested topic. The growing social and political unrest of the past few years has only served to exacerbate this debate. Campuses across the nation have been dealing with the question of what it means to be “safe.” This question has no clearly defined answer, but too often attempts to ensure “safety” in reality lead to censorship. And, too often, “safety” is confused with comfort.

Make no mistake about it, all students and all people deserve to feel safe from harm. But ideas and beliefs do not. The university system exists to foster the exchange of and competition between ideas. Too often now, any sort of push-back against strongly held ideas is perceived as deliberate offense, or worse, bigotry. But the selfsame sense of bitterness and insularity pervades the rest of our culture as well. Why engage in dialogue with someone when you can simply label and dismiss them? The establishment of safe spaces is tantamount to the erection of siege walls. They aren’t about keeping the people inside safe, but keeping dissenting people out.

These practices are not unique to large political and social issues. They pop up in classrooms every day, across a wide spectrum of disciplines. Students are often permitted to excuse themselves from topics and situations where they might be triggered by potentially offensive content, and in doing so the whole classroom is weakened. How can fields like history, literature, and religion ever be tackled without a willingness to confront the uncomfortable? We cannot allow fear or discomfort to stop us from shining light on the darkest corners of our existence because sometimes that is where we make our most profound discoveries.

It’s often said that the only way to prevent history from repeating itself is by studying it. In studying the past, we come face to face with some truly horrific events and periods in human history. In a world dictated by safe spaces and trigger warnings, it isn’t difficult to imagine how we might lose the courage to confront our mistakes and thereby lose the crucial opportunity to learn from them.

I believe that safe spaces and trigger warnings are rooted in compassionate intentions. It is perfectly sensible to want to protect people from encountering trauma that they have experienced elsewhere in life. A sexual assault victim should not have to read a story about sexual assault, nor should a veteran be obliged to watch a war film. I would feel entirely uncomfortable arguing for the contrary of these cases. Yet, in my own experience, I feel more comfortable advocating for people to face their trauma. As a child of a dysfunctional home, I was raised around domestic violence. I witnessed spousal abuse on a regular basis before the deaths of my parents and I am still deeply affected by it. There isn’t a day that goes by where I escape thinking of the experiences I had in my childhood and adolescence.

I consider myself quite well adjusted, but I know there are others from similar backgrounds that are not as fortunate. And while I wouldn’t quite advocate for them to be required to engage with traumatic material, I would strongly recommend it. Coming face to face with difficult experiences that remind of us of our own is an invaluable process of growth. When we interface with great pieces of literature, or even just the insight of our fellow classmates, we have the potential to take away deep understandings of the world. Those understandings have the potential to be uniquely and substantively healing.

I would never allow myself to walk away from confronting a difficult subject because I thought it might remind me of the darkest period of my life. To do so would deprive me of the chance to learn and heal, and it would deprive my classmates of the life experience and insight I have to provide. I believe we are here, not only in college but as a community, to help each other learn and grow. To be the best people that we can be as a result of our combined experiences and knowledge. Whenever someone checks out in the exchange of knowledge, especially in the university system, it is a loss for everyone.

The concepts of trigger warnings and safe spaces are being co-opted by the easily offended at an increasing rate. They usurp the protection intended to be offered to the most marginalized and damaged members of our society and use it as a shield to protect themselves from the threat of challenge. On a bubble campus like ours we find ourselves already deeply insulated from the “real world.” I get incredibly frustrated when I see people erecting walls to protect themselves from discomfort. As a university, and as a community of thinkers, we are at Boston College to challenge and be challenged. Outside of the most extreme cases, I believe discomfort is an inherent part of constructive intellectual discourse.

Discomfort in the classroom is the friction of dissimilar ideas coming into contact. As students, scholars, and intellectuals we must be willing to embrace that discomfort and insulate ourselves from the dangerous relativism that is creeping into our culture at an ever-increasing rate. We’re allowed to think another person is wrong and, if we conduct ourselves politely, we deserve the right to try and prove that person wrong. This interaction is what hundreds of years of academic progress has been built on. But now it seems that universities, the very system that should be promoting this intellectual battle, have taken a back seat or worse—cordoned off the ring. Where once professors and students were in the practice of instruction and learning, we seem to be approaching a practice of coddling and being coddled. What is the point of a university at all if the only thing the community wants is to have its innate ideals protected from the outside?