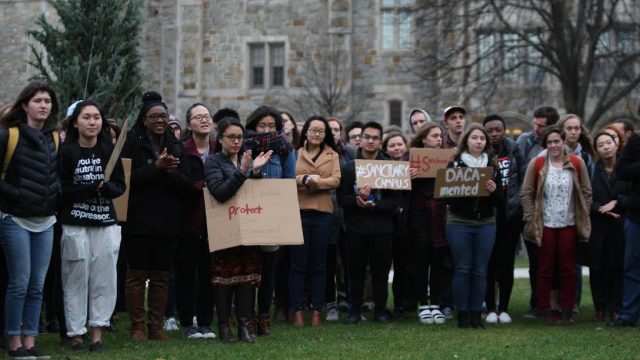 University President Rev. William P. Leahy, S.J. signed two statements on Tuesday concerning Deferred Action for Childhood Arrivals (DACA), an executive order signed by President Barack Obama in 2012 that helps to protect undocumented students from deportation. The two petitions, from Pomona College and the Association of Catholic Colleges and Universities (ACCU), established the University’s support of immigrant students. Leahy’s actions followed Eradicate Boston College Racism’s release of a petition calling for BC to be made a sanctuary campus. Universities across the country are debating this question following President-elect Donald Trump’s threat to overturn some of Obama’s executive orders, which could include DACA.

Leahy signed the two statements the day before Eradicate’s planned walkout protest, which was originally organized to call for the University to declare support for its immigrant students. Eradicate carried out the protest despite Leahy’s decision to sign the statements, instead criticizing the University specifically for not supporting a statement released by the Association of Jesuit Colleges and Universities (AJCU). The group also called for BC to take more concrete steps to support minority groups and undocumented immigrants on campus.

It is worth noting that BC has abstained from signing statements from the AJCU in the past, such as a 2013 statement supporting undocumented students. Eradicate maintains that the AJCU statement in question indicates a larger and necessary commitment on the University’s behalf to the protection of minority students. A chart released on Facebook by the group portrays the Pomona College and ACCU statements as inadequate, as Eradicate believes that only the AJCU statement fully protects students from the implications of the law based on their immigration status.

While it was appropriate for Eradicate to still carry out a demonstration, since it was a part of a larger national protest, and there is undeniably still progress to be made in protecting immigrant students at BC, the organization should have acknowledged Leahy’s action. Students called for Leahy to make BC a sanctuary campus and signing the Pomona and ACCU statements was a step in the right direction. The protesters, and Eradicate by association, may lose some of their credibility by not explicitly making it clear that they acknowledge what Leahy did when rallying to promote further action on campus. This could further alienate the administration and possibly members of student body from supporting its cause.

Because the initial intention of the protest was to decry the University’s lack of expressed support for DACA and minority students, the impact of the event was lessened due to Eradicate’s lack of recognition for Leahy’s support of DACA, which came just before the event. While not holding the walkout would represent an unwise concession on the organization’s behalf, the BC administration is more likely to support and have a positive response to Eradicate protests in the future if it receives the recognition that it deserves for meeting student demands, even if only partially. Cooperation and dialogue between these two entities is essential to the creation of a diverse campus in which students from all backgrounds feel welcome.

Many students feel that the BC administration has not done enough in the past to be conscious of and to react to the issues put forth by minority student groups. Eradicate’s message of the importance of issues of race on campus and creating a more inclusive university for all is still relevant and deserving of a platform for expression. The group is an important influence on campus in promoting mutual respect, and is leading the way forward for positive change.

In the future, it is important for Eradicate to recognize that holding such a protest without explicitly acknowledging the University’s positive initiatives could compromise the integrity and legitimacy of future demonstrations. While protests are important in bringing about change, it is paramount that the organization work with the University administration, and not against it, if its goals are to ever come close to fruition.