Home » Political Correctness in the Age of Trump
Column

Political Correctness in the Age of Trump

Donald Trump has dangerously warped our understanding of the perils of political correctness. Much of America, 71 percent in one poll, thinks political correctness has become a problem. Trump has capitalized on this mood and railed brashly and frequently against our supposedly PC culture throughout his campaign, blaming it for any number of disparate ills that plague our country.

Take his response to Megyn Kelly when she asked him about his long history of degrading comments toward women, many of whom he has called “slobs”, “pigs”, and “dogs”:

“I think the big problem this country has is being politically correct. I’ve been challenged by so many people and I don’t, frankly, have time for total political correctness. And to be honest with you, this country doesn’t have time, either.”

By invoking PC culture to excuse his callous language and behavior throughout his campaign, Trump distracted from the way in which the phenomenon has actually become a problem. In these instances, and so many more, Trump isn’t voicing a reasoned view—he is being mean and vindictive. If our politically correct culture stops Trump and people like him from calling women “dogs”, that is, if it upholds commonly accepted norms of treating other people with respect, I hope we can all agree that it is actually a good thing.

On college campuses, which pundits often point to as the worst examples of excessive political correctness, we may actually need an even stronger PC culture, if we define it as the suppression of hateful insults. Earlier this semester, on our own campus, someone rearranged the letters of a parking lot sign to spell an anti-gay slur. After the election, several instances of hateful and discriminatory acts toward minorities were documented on other college campuses.

But we cannot let Trump distort the term. PC culture is actually beneficial insofar as it suppresses the use of hateful language. The real problem is that it prevents people from expressing their views, which inhibits constructive discourse. It empowers people to ignore other arguments or instinctively condemn them, or worse, their author, as some sort of “ism” without considering the view on its own.

In this sense, political correctness does reign tyrannically on college campuses, where the demand for ideological conformity limits intellectual diversity. When people do share dissenting social and political views, some simply refuse to listen, or worse. Innumerable examples have been criticized in the media over and over: Speakers disinvited from campuses, professors and administrators forced to step down, student op-ed columnists attacked and disavowed.

It seems to me that these examples, which draw ire from all corners, are the clearest manifestations of a much more subtle and insidious culture that represses thought and expression. Campus debate about Trump and everything he represents, or lack thereof (debate, after all, implies disagreement), is a perfect, though regrettable example. Political correctness, if I can use the term to describe this phenomenon, is definitely a problem when students on campus, and indeed people across the country, feel unable to express their views, their instincts—like their support for Donald Trump—for fear of being labeled and attacked.

I was utterly shocked and upset the night Trump won. In the following days, I felt angry and despondent. I had no desire to speak with anyone who voted for him, even though I have very little personally on the line with a Trump presidency.

I realize, then, that this is easier for me to say than for others, but I would not be making this point about our culture if I did not feel strongly that decent and respectful conversation is the only way forward. Not only is freedom of thought and expression critical to the preservation of civilization, but without conversation, hearts and minds cannot change.

People can only be persuaded if they are engaged in dialogue. People can only be engaged in dialogue if they feel comfortable enough to express their views. The more we realize how much we share in common with each other simply by virtue of being human, and that our political views do not define us, the more comfortable we’ll be talking with one another. Let’s forge a culture that both condemns hateful language and supports respectful, intellectually diverse discussion.

In order for this to happen, we all must take the opposite cue from our President-elect: less name-calling, more substance, more evidence, and more conversation. Justice and truth will only prevail as a result of careful argumentation and persuasion, not intellectual and moral intimidation.

My point extends to my own ever-changing view, which has been momentarily captured and expressed here. If you disagree with what I’ve said, please explain why in the comments or if you see me on campus. This is my last column, but I hope the conversation continues, for the sake of moving forward. 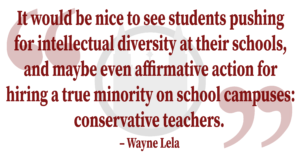