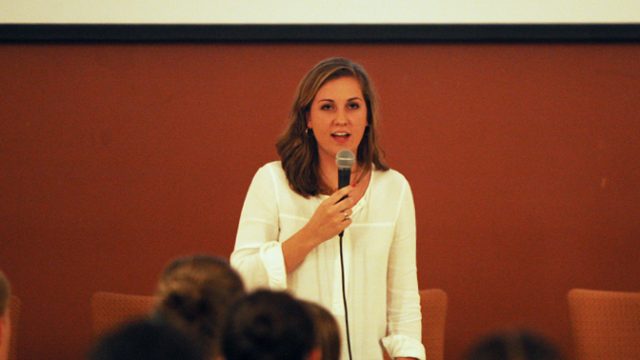 Simons and McCaffrey Report to Board of Trustees on UGBC Initiatives

Russell Simons, Undergraduate Government of Boston College president and MCAS ’17, and Meredith McCaffrey, UGBC executive vice president and MCAS ’17, presented to the Student Life Committee of the BC Board of Trustees on Friday about the quality of programs, student accessibility, inclusivity at BC, and the proposal to make BC a sanctuary campus. They also spoke about the post-election campus climate and civic engagement.

“I think the major priviledge of our positions is that we are so enmeshed in the day-to-day workings of the University, and that gives us a vantage point that few students have,” Simons said. “We have such a generalist approach to student advocacy now, which is the one difference between the Executive [Cabinet] and the executive vice presidency and the presidency—we have to be generalists.”

Simons and McCaffrey updated the Board on the initiative to keep O’Neill Library open 24 hours a day. The extended hours began last year in collaboration with Student Affairs and continued this semester. According to Student Affairs, the initiative has been a success due to the large turnout during late hours, and McCaffery hopes the program will become permanent.

Simons and McCaffrey also notified the Board about two of the resolutions it passed before Thanksgiving break, including a spirituality resolution and a resolution affirming the Student Assembly’s desire for a student center. The student center resolution, which was passed unanimously, does not outline a specific plan or budget for the center, but encourages the Board to make it a priority.

UGBC is also planning to create a peer-to-peer counseling pilot program, in which students can serve as resources for one another. The idea for this program came after an increase in student demand for University Counseling Services (UCS) this year. UGBC senators researched student-to-student counseling services at Harvard University and the Massachusetts Institute of Technology (MIT) to build a potential program. Simons and McCaffrey hope the implementation of this program would help alleviate some of the need for counseling services through UCS.

Simons and McCaffrey also presented their work with student accessibility, and talked about the diversity of what qualifies as accessibility.

In an effort to increase the transparency within the administration, this past October, UGBC held a conversation between student leaders and administrators. The communications department within UGBC also sent out a survey to receive student feedback on how UGBC is catering to students’ needs. McCaffrey said that they hope to release the survey’s results next semester.

“The more you see administrative perspectives on things and the constraints that other people have, it definitely gives you a broader perspective on both how the University works and how we can be most effective as UGBC.”

Simons and McCaffrey also provided updates on campus inclusivity. The AHANA Leadership Council (ALC) Boat Cruise and the GLBTQ Leadership Council (GLC) Formal, previously referred to as the GLC Gala, are two events that encouraged diversity and inclusion at BC. The name of the GLC Formal was changed this year after being “gala” since 2009. “Formal” implies that students have a date. The name indicates greater acceptance of LGBTQ students at BC, Simons said.

UGBC is also working to challenge societal norms by creating the “Masculinity Unmasked” photo campaign. Each photo comes with a story from a male undergraduate at BC about their experiences with masculinity. Simons and McCaffrey made this a priority this year because they felt it did not get enough representation on campus.

UGBC also hosted an event titled “Decoding the BC Bro Culture,” which featured a panel of professors and students who spoke about the prevalence of hypermasculinity on campus.

Sexual orientation was added to the non-discrimination clause in 2005 after a years-long effort by some students to get it included. Its inclusion followed at least two referenda sponsored by UGBC, including one in the spring of 2005. McCaffrey said her understanding of the referendum process is that it goes forward only if conversation with administrators is stalled on an issue, which she said is not the case with including gender identity in the clause.

Simons and McCaffrey also discussed their work toward increased financial inclusivity. The first initiative they discussed was helping to fund T passes for Connell School of Nursing students, who often take the train to hospitals downtown for their clinicals. UGBC also annually funds shuttles to South Station and Boston Logan International Airport during Thanksgiving Break and will do it again for Spring Break.

UGBC hosted a number of events last month that allowed students to discuss the outcome of the presidential election. It hosted an event on election night that allowed students to view the results of the election together in the same room. UGBC also held several discussions during its meetings to reflect on what the outcome of the election means for students on campus.

Simons and McCaffrey concluded their presentation to the Board by discussing the petition for BC to become a sanctuary campus, which has garnered over 1,600 signatures by students and alumni. The Student Assembly passed a resolution supporting the petition on Sunday night.

“In these positions you have to consider a lot of factors,” McCaffrey said. “The more you see administrative perspectives on things and the constraints that other people have, it definitely gives you a broader perspective on both how the University works and how we can be most effective as UGBC.”