Home » At the Winston Center, Ethics and Globalization Meet 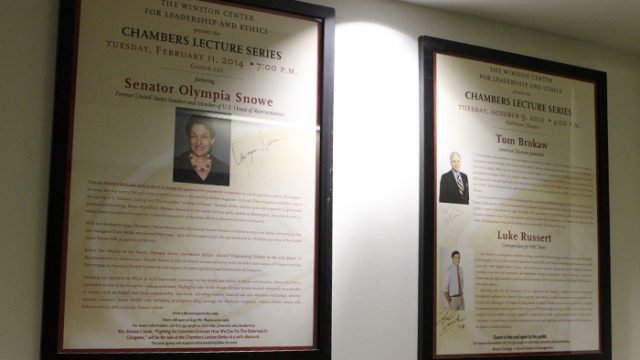 At the Winston Center, Ethics and Globalization Meet

In an era of globalization, the business world has become increasingly interrelated, blurring borders. Recognizing this, the Winston Center for Leadership and Ethics strives to develop global citizens and bring programs to all Boston College students to expose them to diverse topics and new perspectives. This mission, however, was not exactly what the Winston Center was originally founded for.

This year, the Winston Center will be celebrating its 10th year since its founding as a gift from Robert Winston, Boston College ’60.

While the heart of the Winston Center is still intact, it took a different direction from Winston’s original vision of a place for executives to meet and talk about business ethics and leadership. Today, the Center has shifted its focus from simply executive education to creating a community that teaches students how to excel in leadership and ethics in the business world and in society at large. Since one of the Center’s goals is to bring a more global perspective to the students, it brings in speakers from all corners of the world.

“It’s all about bringing diversity of thought and perspective to Boston College because we are in this bubble here and yet the students are from all over,” said Monetta Edwards,  assistant director of the Winston Center.

The Center has brought in big name speakers to campus, including  Julia Gillard, former Prime Minister of Australia and F.W. de Klerk, former President of South Africa. The center encourages its speakers not only to talk about their role as a leader, but to also speak about their other passions.

During the second semester, the Center holds its Chambers Lecture Series, which incorporates both global and national perspectives. For these speakers, the Center tends to invite those who have experienced some type of adversity in their field of work, such as Lara Logan, the 60 Minutes news reporter who was attacked and sexually assaulted during the Arab Spring uprisings.

“You see these people at very high levels and you think of success, but we like them to talk about their setbacks and failures and life to make it more real,” Edwards said.

Edwards explains that she tries to collaborate with all different groups—whether it be the Slavic studies program, theatre department, or women’s collaborative—to come up with a diverse list of speakers that appeals to all students, not just those in the business school.

Those accepted into the Jenks Leadership Program have the opportunity to take part in workshops that focus on individual leadership development to discover what type of leaders they are. They also take on a community service project.

Historically, the projects have been centered  around campus, such as the recycling program in the Mods. Last year, though, the students went further and thought nationally. They gathered all the on-campus comedy groups for a show and donated the proceeds from ticket sales to Prevent Child Abuse America.

The Winston Ambassadors help with the promotion of the events as well as providing the opportunity to engage with the speakers in a smaller group setting. Not only that, but it also gives the students an opportunity to learn essential life skills.

“I think it’s really taught me how to reach out and be like the worse someone can do is say no,” said Molly Davis, Winston ambassador and MCAS ’18 .

Through the Winston Ambassador program, students gain perspectives that they don’t get through a normal day on campus, explains Davis.

The Winston Center is an important resource for BC students, especially those in the Carroll School of Management. Business and ethics are two things that should naturally go together. The Winston Center urges students to think larger than themselves and builds upon the curriculum of Portico, a class that was actually born out of the Center.

Davis points out how the business world is getting more and more interconnected through globalization, and having speakers that represent justice is an essential thing for students to be exposed to, especially within the comforting confines of the BC bubble.

“It brings a great perspective and builds upon the same thing that you’re learning in class,” Davis said.

Moving forward, Edwards hopes to continue to develop the programs the Center hosts and reach out to more departments for collaboration. The program has been primarily centered around the BC campus and the surrounding area, so she hopes to continue to push the students to expand their perspectives and think globally, as well as simply expand the scope and reach of the Center in general.

“We are really committed to giving you the tools to be that extra special person when you go into the world and just be more kind and aware of your fellow human beings,” Edwards said.