In recent years, the city of Boston has grown into a technological hub, a place in which startup tech companies can develop into both national and international business powerhouses. Living in such close proximity to the city, Boston College students should have the access to benefit from this ongoing growth. But there was a sizable hole in the educational system that prevented students, specifically women, from getting the resources they needed to succeed. The Women’s Innovate Network (WIN) was created to solve this issue, and has made considerable progress in recent years.

In 2015, John Gallaugher, a professor in the Carroll School of Management, noted a gender disparity in his algorithm’s course, which is made up of far fewer female students than male ones. Gallaugher gathered these few women in his course together to begin a dialogue about the lack of women in technology industries, business, and clubs pertaining to these subjects, as well as those about entrepreneurship. This discussion sparked a passion in these women that did not not burn out until they could find a practical solution: the creation of WIN.

“To foster the number of women interested in a career of technology and business, by building a supportive network, of women and men at BC and beyond,” Arev Doursounian, co-president of WIN and MCAS ’17, said of the mission statement.

In early stages of development, the WIN founders realized that there was a gap in the educational system. They sought to help students who are looking for a career not exclusively in business or technology, but rather the unique intersection of the two. This niche is an expanding field, yet there was a lack of resources on campus for women interested in pursuing that type of career.

WIN helped fill the gap by creating an inclusive environment that empowers and encourages women to find success in these historically male-dominated fields. WIN frequently collaborates with the Edward H. Shea Center for Entrepreneurship and BC Women in Business to provide a myriad of resources for women to learn from experienced professionals, create meaningful network connections, and develop valuable skills that they can apply to their careers.

Soon after its creation, however, the program faced what could have been a major setback. The founders of the program were preparing to graduate, meaning it would fall upon the shoulders of the underclassmen in the club to carry out its mission. Doursounian, CSOM ’17, and Hannah Say, CSOM ’18, stepped up to the plate as co-presidents. Under their leadership, the program has continued to rise to new heights.

There are now approximately 200 students involved in WIN, and the club is still accepting new members. WIN has hosted a number of events, covering a wide and ever-expanding range of topics. From keynote speakers with nontraditional career paths, to workshops that teach a specific skill, to opportunities to cultivate meaningful connections with professionals in the industries, Doursounian and Say have put in long hours to ensure that every event hosted by WIN offers something new and effective for its attendees.

“People hear ‘women innovators’ and wonder if it’s only for women, definitely not,” Say said. “We want to build an inclusive community, because that’s the point. Female empowerment is about raising people up and not excluding anyone, so the events are open to all students.”

Some popular past events have included the Swift coding workshop. At this event, students learned how to use Swift coding language, which is used in iOS devices. This program was unique in that it required no previous experience, and by the end of the session, the attendees had created a functional app that could be used on their phones.

“I really liked the Swift workshop … at the beginning I had no idea how to work the software, but by the end I had like a real app, it was cool because in a very short amount of time we were able to produce a tangible product,” Doursounian said.

Lobue, a former partner at Goldman Sachs, left a stable position to create her own start-up business, Greenback Labs. She spoke to BC students in October at an event Say cited as one of her favorites. Say said she believes the popularity of this event arose from the practical advice Lobue provided, as well as her less-conventional career path. Younger students, who  have not decided on their exact career projections, could have an easier time identifying with her as a role model as opposed to someone who followed a well-defined track.

WIN hosted its largest event of the semester last Thursday night, where the group provided a catered dinner and talk from keynote speaker Diane Hessan. A former CEO of the Startup Institute and current chairman of C Space, Hessan is a well-respected businesswoman and a bestselling author, who provided advice on developing and expanding competitive business strategies. This dinner was as an excellent networking opportunity for students to meet a number of BC alumni in attendance, while the dinner environment served as an ideal platform for initiating conversation and forging connections.

“We really wanted it to be an opportunity for a community building event, which is why we decided to make it a dinner and invite back recent alumni … so that they will have a chance to network and foster a conversation,” Say said.

While the program has made considerable progress since its creation, it is still looking to grow. WIN encourages any student interested in business and technology to join the club, and is also open to suggestions about future events or workshops.

“There are a lot of opportunities that I think people aren’t aware of, and would get really cool experiences out of, but just aren’t as widely promoted,” Say said. 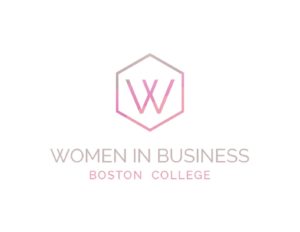