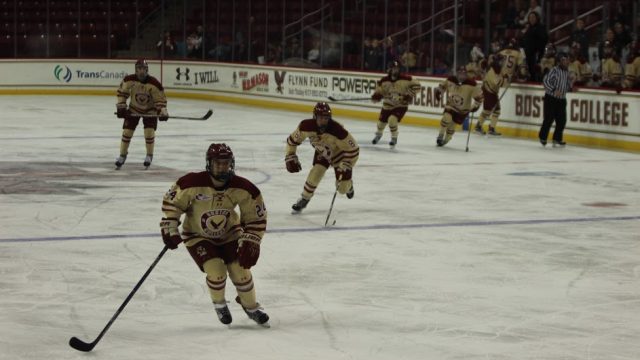 Boston College women’s hockey gave itself an early Christmas present with a win against Dartmouth College on Wednesday at Thompson Arena. With the 6-1 victory, which featured great offensive play and a near-shutout by goalie Katie Burt, the Eagles sealed their first half of play with a 12-3-3 record going into Winter Break.

BC (12-3-3, 10-2-1 Hockey East) may have struggled to get in the offensive groove, but 12 minutes into the first period, Delaney Belinskas connected with Andie Anastos and Toni Ann Miano for the first goal. Not long after, Newkirk was the star with her own goal, putting the Eagles up 2-0 to end the first period. With aggressive play, Newkirk barrelled down the ice and stripped the puck from Dartmouth control, taking little time to worry about if it was the perfect shot. It didn’t matter—BC didn’t need perfect. It just needed to go in.

The Eagles brought the offensive momentum into the second period, with captain Andie Anastos scoring just four minutes in. After the goal, however, BC fizzled out, failing to capitalize on a power-play opportunity. The Eagles also faltered foul-wise, doling out chances for the Big Green (2-9-0, 1-6-0 ECAC) to score left and right with players in the box. With the offensive production iced, BC headed to the locker room still clutching a shutout and a hefty lead.

While there was little for BC to worry about, Dartmouth gave it cause for concern when it came out of the gate to score just 1:51 into the third period. The goal set a late-start fire under the Eagles, as the second half of the period was the BC show. The offense connected so well that even defensemen got in on the action. Kali Flanagan was in the right place at the right time, waiting at the goal when a shot by a fellow Eagle was deflected off Dartmouth goalie Robyn Chemago. Flanagan scooped it up and beat Chemago top shelf, adding another goal to the tally. Megan Keller, one of the nation’s best defensemen, got in on the party too. Keller shot hard and high from far out to increase the BC lead to 5-1.

Even though there were only four minutes left, the Eagles didn’t feel the need to slow down the offensive production. For her second goal of the game, which came with just seconds left on the clock, Belinskas snuck the puck by Chemago one last time.

After a relatively rocky start against opponents like the University of Minnesota Duluth, it seemed as though the Eagles would not return to their former glory—one that included a 40-1 record and a trip to the NCAA National Championship—this season. But after their recent performances, it appears that BC is going to come out stronger than ever for the second half. Though Dartmouth is not the most fearsome opponent, a high-scoring game indicates the offensive possibilities that BC has against more difficult teams. For now, though, it has this gift to be happy about.