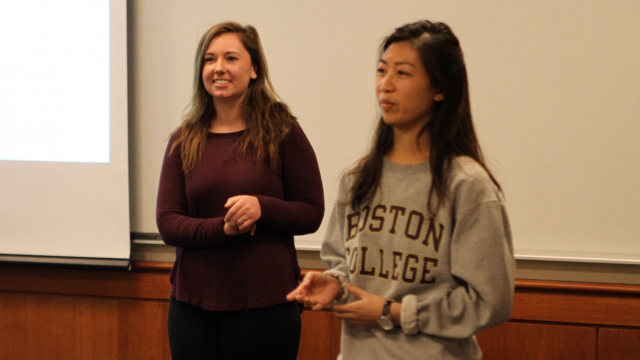 For many, President-elect Donald Trump’s ambiguous rhetoric has left the future of United States domestic and foreign policy shrouded in mystery. Mary Stygles, MCAS ’17, said she believes that the U.S. is entering an environmental dark age at a policy discussion held on Monday, titled “Trumped by Global Warming.”

The student-led presentation, punctuated by break-out sessions, was hosted by the Boston College chapter of GlobeMed, a non-profit collegiate advocacy organization, and was intended to educate BC students on the future of U.S. environmental policy under the incoming Trump administration.

Stygles began the talk by describing the evolution of Congressional support of environmental regulation. In the 1960s, Congress passed a plethora of new laws, such as the Clean Air Act of 1963, the National Environmental Policy Act of 1970, and the Federal Water Pollution Control Act of 1972, during what Stygles called a “golden age” of environmental protection.

“These green laws were pushed through with the purpose of being flexible, so that regulations could change as science developed relating greenhouse gases and carbon emissions to climate change,” Stygles said.

Today, that legacy is in jeopardy, Stygles said. She cited the proposed Regulations From the Executive in Need of Scrutiny Act, or REINS Act, which, if passed, would require any new economically significant environmental regulations to be both approved by Congress and signed by the president.

Such requirements would severely constrain the ability of federal agencies, such as the Environmental Protection Agency, to exercise the broad discretion they currently enjoy in interpreting and enforcing vague environmental legislation.

While the REINS Act has so far remained stalled in Congress, Speaker of the House Paul Ryan has given it his endorsement, and the act’s passage has become a key part of the incoming Trump administration’s prospective 100-day plan, Stygles said.

“If the 1960s were the golden age [of environmental protection], now you might say that we’re heading into the dark ages.”

Stygles pointed out that the U.S. Supreme Court is currently one justice short of its traditional nine members. While the Republican-led Senate, which must confirm judicial nominees, has blocked President Barack Obama’s pick from reaching a vote, Trump is likely to be able to achieve confirmation for at least one and as many as four new Supreme Court justices, she said.

Stygles also spoke about the role played by the executive branch in environmental policymaking. Obama, facing intense gridlock in Congress, has turned increasingly to executive power. His Clean Power Plan of 2015, which set a national limit on carbon pollution, and his changes to the Corporate Average Fuel Economy standards in 2011, which reduced allowable emissions by motor vehicles, have been lauded by climate advocates.

These policies are not permanent, however, as they only continue at the discretion of the sitting president, and can be easily abandoned by a subsequent administration. Stygles said that Trump’s inclusion of Myron Ebell, a vocal climate change denier, to lead his transition at the EPA portends a swift reversal of these policies.

Erin Annunziato, MCAS ’17 spoke about the uncertain and often erratic role of international accords in influencing U.S. climate policy. She referenced the United Nations Framework Convention on Climate Change (UNFCCC) as the first major example of international agreement on the need to reduce greenhouse gas emissions.

The UNFCCC was ratified by the U.S. Senate in 1992 and, while the stated intent of the Convention was to reduce greenhouse gas emissions in order to avert greater climate change, no specific emissions reduction targets were mandated, Annunziato said.

The Kyoto Protocol of 1997, the first legally-binding international climate change treaty, proposed by the UNFCCC, laid out explicit targets for state parties to achieve, and set a worldwide goal to reduce greenhouse gas emissions to 95 percent of 1995 levels, according to Josh Elbaz, MCAS ’19.

Due to concerns over China’s classification under the Protocol as a developing country, and the accompanying leniency with which China’s economy would be treated relative to that of the U.S., President George W. Bush did not submit the Protocol to the Senate for ratification, Elbaz said.

Annunziato then spoke about the Paris Agreement of 2015, the second treaty drawn up by members of the UNFCCC. Intending to keep the global rise in temperature in the near term to no more than 2 degrees Celsius above pre-industrial levels, the Agreement legally requires state parties to implement domestic regulatory structures that aim to reduce emissions within their borders, she said.

While Obama formally signed the Paris Agreement on Sept. 3, 2016, Trump has said that he supports an immediate American withdrawal from the Agreement, which has not been ratified by the Senate and is not legally binding in the U.S.

While Annunziato recognized in her remarks the domestic and international progress achieved in past decades, she closed by expressing dismay at the seemingly bleak future of environmental policy in the U.S. under Trump’s administration.

“If the 1960s were the golden age [of environmental protection], now you might say that we’re heading into the dark ages,” Stygles said.

Correction: An earlier version of this article attributed the block quote to Erin Annunziato, MCAS ’17. It has been reflected to show that the quote was said by Mary Stygles, MCAS ’17.