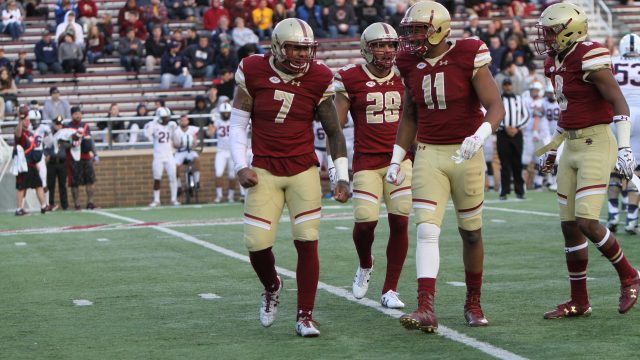 Harold Landry Was the Country’s Best Defensive End in 2016

Ill-informed voters made their second-biggest mistake of the past month when they selected Alabama’s Jonathan Allen as the winner of 2016 Ted Hendricks Defensive End of the Year Award on Wednesday. Tennessee’s Derek Barnett, Utah’s Hunter Dimick, Florida State’s DeMarcus Walker, Pittsburgh’s Ejuan Price, and Boston College’s own Harold Landry rounded out the list of finalists on the ballot.

Granted, the decision was not an easy one. How do you measure the effectiveness of a defensive end? Sacks? Tackles for loss? Forced fumbles? How about all three?

Simply put, Landry is the most versatile edge rusher in the country—and it’s not even close. His seven forced fumbles rank first in the nation and fourth all-time. He bulldozed opposing quarterbacks for 15 sacks, tied for best in the country with Walker (he leads Walker in sack yardage, though, 133 to 115). While he “only” tallied 20.5 tackles for a loss—good for third in the nation—the 142 yards lost on those plays is unmatched by any defender in the FBS. Plus, he accomplished all that and more in only 11 games due to an early-season injury.

Just how valuable Landry is to the Eagles’ defensive unit cannot be overstated. His ability to maneuver around the offensive line into the backfield is the main reason for BC’s 14.8 percent front-seven havoc rate, second in the country behind Michigan (we miss you, Don Brown). The Eagles limited two opponents to negative rushing totals and six to under 100 yards. Landry’s constant pressure often masked a secondary which was prone to allowing big plays, preventing quarterbacks from getting their passes off, and nipping the problem in the bud. On passing downs—defined as needing eight or more yards on second down or five or more on third and fourth down—BC ranked third in the nation with a S&P+ of 156.1 and first in sack rate with 16.7 percent.

In the most important games of the year, Landry was at his best. It started against the Seminoles last season, when he recorded a career-high 11 tackles en route to his first of two ACC Defensive Lineman of the Week honors.

This year, the Spring Lake, N.C. native sacked NC State quarterback Ryan Finley and forced a fumble to set up a field goal in a 21-14 victory, BC’s first conference win in nearly two years. In losses to Clemson and FSU, Landry still did his job and forced a fumble in each game. Against Wake Forest, he tipped a pass that resulted in an interception, recorded 4.5 tackles for a loss, and totaled three sacks to become the Eagles’ single-season leader with 15. Not to mention he helped secure bowl eligibility for a program that desperately needed it.

But, as stellar as Landry’s numbers are this year, the announcement did not come as a surprise to those who follow ACC football. Two weeks ago, Landry was left off the All-ACC First Team in favor of fellow finalists Price and Walker. And two days ago, ESPN delivered a smoldering hot take and named Price and Walker to its All-ACC Team, too. The Associated Press was the only major media outlet to get it right, voting Landry to the All-ACC First Team with Walker in its annual selections yesterday.

Ultimately, though, it’ll be NFL front offices that will judge the professional value of the 6-foot-3, 250-pound junior. The question is: when?

The answer will depend on the draft grades Landry receives from NFL GMs over the coming weeks. After all, he could stay for his senior year, enjoy another year of college, and be a surefire first-round pick in the 2018 NFL Draft. But if he is projected high enough now, he could ditch school for paychecks and public esteem as soon as next April.

If NFL scouts see what Superfans have witnessed all season long, then Landry should be picked between the second and fourth rounds next year. He makes up for being slightly undersized with his explosiveness off the line and his knack for contorting his lower body to turn the corner on blockers. And don’t even think about letting him near your quarterback—of his 15 sacks, seven have resulted in fumbles. The odds of Landry and his signature arm sleeve jarring the ball loose are pretty damn good.

Even better are his chances of playing football on Sundays instead of Saturdays next fall. If he does indeed leave early, it makes the voting results of the Ted Hendricks Award all the more disappointing. It would be nice for Landry to leave the Heights with some hardware, a national award commemorating a season which, statistically, remains unmatched by the best defensive linemen in the nation.

Instead, he may leave with nothing but a Golden Helmet of the Year Award, an accolade given to the top player in New England. Of course, that’s a tremendous honor, but too often does it feel like BC is competing to be the best in the Northeast. It’s a little like beating UMass and UConn: it never gets old, but it leaves you wanting something more.

Landry seemed primed to burst that regional bubble this season. Yet, once again, the voters got it wrong. Here’s to hoping 2017 is a better year for democracy. 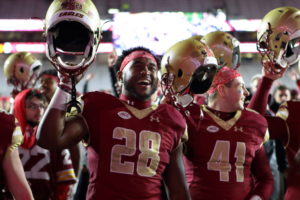