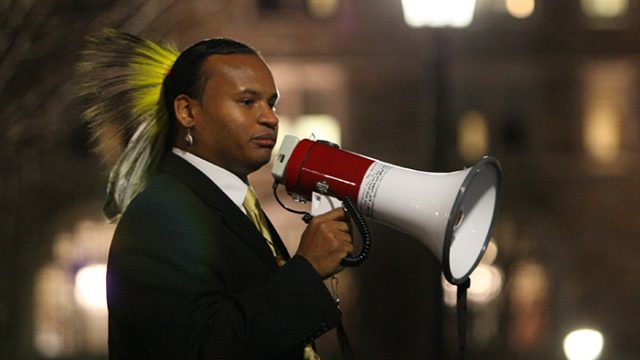 About 50 students, faculty, and staff stood on O’Neill Plaza in front of a well-lit Gasson Hall Thursday night at a Climate Justice at Boston College (CJBC) rally. It was aimed at speaking out in solidarity with the protesters at Standing Rock, the North Dakota Native American reservation. For months, Standing Rock has been the site of a protest over the proposed Dakota Access Pipeline. CJBC’s rally was organized in conjunction with the Chinese Students Association, the South Asian Student Association, and Eradicate BC Racism.

The Army Corps of Engineers announced this week that it would not grant a permit required for the completion of the pipeline’s final leg, a major victory for Standing Rock, though the decision could be reversed by President-elect Donald Trump, who supports these types of pipelines, when he takes office. CJBC members held signs, two of which read “Boston College Still Stands With Standing Rock” and “Take a Stand, No Pipelines on Native Land.”

“I know it’s cold, but at least it’s not as cold as North Dakota,” said Alyssa Florack, a member of CJBC and MCAS ’17. CJBC chose to hold the rally despite the success at Standing Rock.

“When the world is claiming that Standing Rock can stand down, that we won, that the battle is over, it’s even more important to recognize and call out the continued abuses that our addiction to fossil fuels causes,” Florack said in a speech.

She said in an email that the rally had been purposely scheduled for 4:30 p.m. to ensure that the group would be allowed to use a megaphone. University policy is that megaphone usage is only allowed after 4:30 p.m. to avoid disrupting classes, and at another rally, held at 3 p.m. in late October, CJBC was not been allowed to use one. Dean of Students Thomas Mogan was also in attendance for part of today’s rally.

Sachem Wampatuck Wompimeequin of the Mattakeeset tribe of the Massachusett nation was the special guest speaker at the rally, sharing his feelings on historical degradation of indigenous lands and his thoughts on Standing Rock. Wompimeequin serves as an ambassador to the United Nations for indigenous peoples. He started out his talk with a song of prayer in the Massachusett language, honoring, he said, his ancestors buried under the ground on which BC was built. He finished as the Gasson bells rang out 5 o’clock, booming behind him.

Wompimeequin pointed out that the Chestnut Hill area used to be referred to as Nonantum, a holy word in his language that means “rejoiceful blessing” that is also the name of a village of Newton. He said there are just a few natural areas left that have been preserved that are very important to his people, including Silver Lake. Wompimeequin also mentioned a 1675 law that remained on the books until 2005 banning Native Americans from entering Boston Common. The law was not enforced, but Wompimeequin said he tried to bring it to the attention of area leaders, and eventually then-Governor Mitt Romney signed an official repeal of the ban in 2005.

He also talked about laws that took land away from Native Americans and stripped them of their rights, enabling settlement and development by non-natives that Wompimeequin called part of an illegal “paper genocide.”