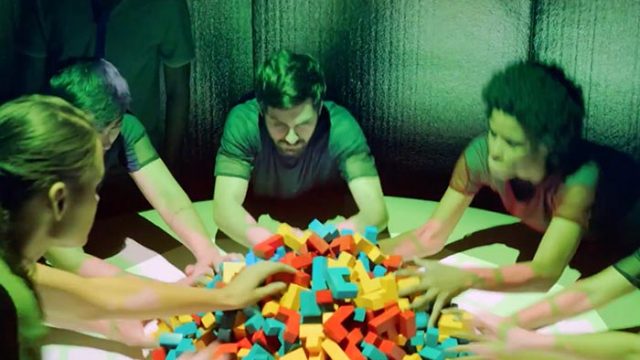 As a new presence in the ever-expanding genre of dystopian media, Netflix’s Brazilian drama, 3%, manages to transform a conventional story into an engaging series that develops beyond a superficial dynamic among its characters. The show’s sparse and concise design takes the emphasis off of the genre’s eye-catching technology, which might be a deficit to some, but may actually allow faster-paced and intriguing content to emerge. As a whole, 3% is an entertaining drama with enough suspense and plot twists to compel viewers to enthusiastically watch the next episode.

The premise of the show centers around a city divided between a land of scarcity, the Inland, and a place of abundance, the Offshore. At the age of 20, everyone in this city must participate in the Process, a series of tests used to determine which 3 percent of the population will thrive in the Offshore, and which people will be condemned to squalor in the Inland. The story opens on the latest group of candidates to take the test, introducing us to Michelle (Bianca Comparato), determined and wheelchair-bound Fernando (Michel Gomes), and the honey-badger of the group, Joanna (Vaneza Oliveira). Presently, the first murder in over a hundred years was committed on the Offshore, and now the Offshore has sent an investigator to evaluate Ezequiel (João Miguel), the creator of the Process. This increased scrutiny leads to a quiet chaos throughout the Process, and draws viewers into an increasingly complex web of conflict.

The show’s participation in the dystopian genre inclines the viewer to be cynical of the Offshore from its first mention. But while the poverty and degradation of the Inland is apparent from the beginning, conflict for the viewer develops from the continued insistence of the Offshore that this division of society is the result of merits of the individuals, not salvation based on luck of the draw. Given that some cultures in our world see poverty as mainly the result of the individual’s laziness or other’s lack of merit, 3%’s use of merit-based salvation perhaps attempts to caution viewers against blindly promoting this narrative. The nature of the Process, while grueling to a sometimes petty extent, isn’t quite what modern society encounters, but it potentially suggests that viewers should avoid a complacent regard to the institutions that govern their own societies. To further complicate matters, that one murder on the Offshore was committed by a member of an Inland group called the Cause, rebels that oppose the Offshore and the Process in the familiar dynamic of a grassroots coalition challenging a much more powerful opponent. As a result, the viewer is left scrambling to decide where their loyalties lie, which ends up hinging on their perception of the legitimacy and fairness of the Process.

What’s interesting is that a wide range of attitudes toward the Process are demonstrated by parties of the Inland and the Offshore alike. The calculating, unhinged Ezequiel treats his Process as a matter of life and death for everyone involved, and his dedication to maintaining a highly productive group of Offshore citizens borders on insanity. The Offshore higher-ups want the system to be a little more lenient, and are concerned that the Process, in its current state, values cutthroat, cold personalities more than moralized, more human candidates. And the candidates themselves have a variety of stances on the Process, from supporting it like it’s a religion, to attempting to overthrow the whole system. In more conventional dystopian dramas, such as the beloved Hunger Games, the viewer has a smooth path to supporting the rebellious forces through fairly sympathetic characters like Katniss or Peeta. But in 3%, the characters and the system resist easy categorization as wholly good or bad entities.

Indeed, as the episodes progress, so too does the viewer’s knowledge of the Process and the characters operating within it. The tests, which evaluate everything from mathematical abilities to emotional hardiness, inspire a virulent strain of competition among the candidates that leads to deception, betrayal, and cheating. Aside from keeping the viewer from getting too comfortable with the characters, they choose to sympathize with despite their jaw-dropping indiscretions, this situation further diminishes what faith the viewer may have had in the goodness of the Process. In the grand scheme of the show’s dystopian concept, it seems that even a society created to eradicate war and injustice remains subject to human error, and calls into question humanity’s power to create a heaven and hell on Earth. Esoteric and moderately bland plot-device names aside (because what’s more riveting than a “Process” or a “Cause”?), 3% contributes a nuanced voice in popular dystopian media.

netflix 3%
It’s Time For Show and Tell, Kids
Living in the Midst of Art and Stardust