Home » BC Strings Together First Win Streak With Victory vs. Friars 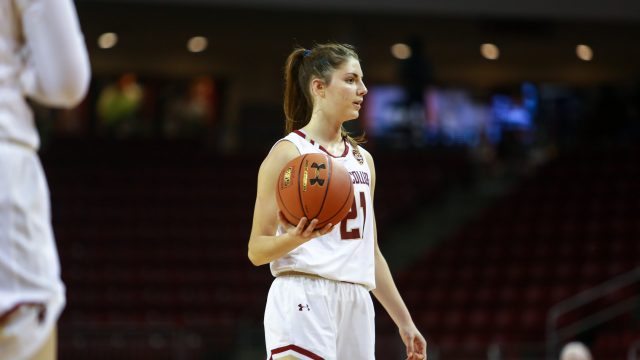 BC Strings Together First Win Streak With Victory vs. Friars

It’s hard to imagine a better start. After recording the first nine points of Saturday evening’s game, Boston College women’s basketball outscored Providence, 13-7, to finish the opening quarter. It looked as if the Eagles were not only on their way to their second consecutive victory, but a decisive one at that.

Ultimately, the Eagles defeated their former Big East rivals, 57-53. But a couple more Providence (7-3) 3-pointers, and its perimeter-driven comeback would have been complete.

BC (4-6) nailed two-thirds of its shots from the field in the first quarter. Even the most unlikely shots were falling. Two and a half minutes in, Georgia Pineau, after multiple hesitation pump fakes, beat the shot clock with a heave from beyond the arc. Mariella Fasoula, Emma Guy, and Pineau clogged the driving lanes, each blocking a shot. With nowhere to go on the interior, the Friars were forced to the outside. But the nation’s fifth-best 3-point shooting team could only muster one conversion from downtown.

Down 19-7, Providence had the ball with a few seconds remaining in the period. Sarah Beal had the chance to bring the ball up the court for one last scoring opportunity. Unfortunately for the Friars, Beal lost control of the ball, and it rolled out of bounds. Pineau inbounded to Kailey Edwards on the left wing. Edwards pulled up for the quick trey, but was fouled with 1/10th of a second to go in the quarter. The redshirt senior made all three of her shots from the charity stripe.

For the first portion of the second quarter, nothing changed.

Providence’s first shot was a Yoyo Nogic airball from 3-point land. This miscalculation was quite telling of the Friar’s start. Nogic, the nation’s ninth-best 3-point marksman, typically makes more than half of her shots from deep. To make matters worse, an Edwards mid-range jump shot and a Kelly Hughes triple extended the BC lead to 20.

Slowly, but surely, Providence began to heat up from three. A Clara Che 3-pointer, followed by an array of baskets by the entire Friar cast, including a Nogic 3-pointer of her own, got Providence back in the game. Entering the third quarter, the Friars only trailed 36-25.

The deficit would have been even smaller if it wasn’t for Edwards. The forward drained three jumpers and laid in another, en route to completing her 12-point half. Her performance put her over the 1,000-point mark for her career and put her team in a position to counter the Providence comeback.

It felt like déjà vu. Earlier in the week, BC pounced on a double-digit lead over Yale. But the second half brought trouble, as the Bulldogs strung together a 15-2 run and found a rhythm from distance. While the numbers differed, the same thing happened against Providence.

The Friars jumped out to a 8-0 run to kick off second half play. A Hughes layup ended the scoreless streak, but not the Providence shooting spree. Allegra Botteghi came right back with a 3-pointer to tie the game at 37. Although the sides ended the quarter trading baskets, only a total of 10 points were scored in the final five and a half minutes.

Unlike the beginning of the game, BC’s possessions were drawn out to the end of the shot clock, forcing players to make quick decisions. Often, they looked to Fasoula who was typically double- or triple-teamed. As a result, the Eagles turned the ball over, thereby forfeiting several offensive chances. It wasn’t too pretty on the Providence side either. The Friars were continuously outworked on the glass and went dry from the field. Yet it was a Che 3-pointer at the buzzer that carried the game into the final period, tied at 42.

It took more than two minutes, but Fasoula struck first blood in the fourth. Just seconds later, Nogic downed one from 3-point land, giving Providence its first lead of the game—thanks to Hughes, a lead that was short-lived. The veteran guard spotted up from deep, lifting the Eagles back on top. A Fasoula post move and score, and a Hughes baseline drive and finger roll finish, distanced BC from the Friars.

Botteghi landed one last 3-pointer, but a turnover on Providence’s next possession effectively ended the game.

For the second consecutive game, the Eagles have had to find a second gear, in order overcome their opponent’s comeback. It has worked two times in a row, but teams cannot win in the long run playing like this—something that head coach Erik Johnson has recognized.

“Our consistency has been our achilles heel right now,” Johnson said. “We play some beautiful basketball for stretches. It’s the mistakes, it’s the periods where we make silly passes or make a defensive error that allows teams to hang around.”

For the fourth straight game, BC turned the ball over more than 15 times. Providence made them pay for these mistakes, but the punishment will only get worse come ACC play.

Johnson and his supporting cast must focus on limiting the unforced errors. If they do that, and continue to spread the ball around, the wins will keep rolling in. For the second-straight game, three BC players scored at least 10 points. Players like Edwards and Pineau are starting to find confidence in their shots. We may be nine games into the season, but this multidimensional-looking Eagles team is just getting started.