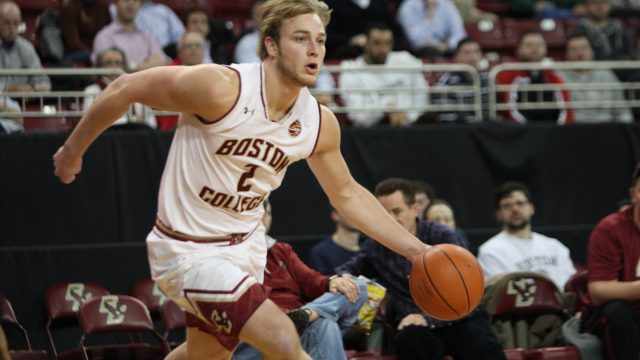 The story had practically written itself. A superstar player, mired in a rare off night, blocks out past failures and shoulders the load on the most important possession, draining a clutch shot and leading his team to victory. It’s a Kobe Bryant-esque narrative. And for Boston College men’s basketball, it almost became reality.

As Jerome Robinson’s floater from one step inside the free throw line plopped gently through the twine, giving the Eagles a 63-62 lead over Hartford with 9.3 seconds remaining, fans rose to their feet. Casting a 1-for-12 shooting night to the side, Robinson rose up and seized the game by the throat.

Or so everyone in attendance thought. But this happy-ending narrative has not appeared for BC Athletics over these past few years, and misfortune reared its ugly head once again on Friday night. On a broken final play, point guard J.R. Lynch snaked into the paint and whipped a pass to the corner. The ball reversed to the wing, where Jason Dunne drilled a cold-blooded 3-pointer, sending Hartford (3-8) to a 65-63 upset victory over the Eagles (4-5)—their first ever win against an ACC opponent. As Dunne’s shot dropped through the net and landed on the floor with an audible thud, fans and players alike watched utterly shell-shocked.

“If you don’t come to play in Division-I basketball, you get beat,” Jim Christian said after the game. “I don’t care who they are, I don’t care what their record is.”

The thrilling conclusion to the game masked what was an extremely sloppy contest through the first 35 minutes of the game. The teams combined to shoot 24.5 percent from the floor in the first half, with each side having more turnovers than made field goals.

BC raced out to an early 16-7 lead in the first eight minutes of the game. Playing against a 2-3 zone that lacked length, the Eagles focused on moving the ball inside out, entering the ball to either A.J. Turner or Connar Tava around the free throw line before kicking it out to shooters. Ty Graves, starting in place of Ky Bowman, aided the effort with his outside shooting and superior passing skills.

But the early start proved to be fool’s gold. The Eagles—who only scored two points in the paint the entire half—settled for quick shots, often 3-pointers. While many of the looks were open, the fact that the team didn’t look to attack the paint against a team that has the 319th tallest average lineup was quite puzzling.

Over the remaining 12 minutes of the half, the Eagles made only two field goals. Robinson looked particularly out of sorts, missing all four of his attempts and turning the ball over five times before eventually leaving for the locker room after taking a hard fall late in the half. Ball movement dried up and the Eagles continually failed to play through someone at the free throw line, in the center of the zone.

Senior guard Jalen Ross—who entered the game averaging over 21 points—helped stem the tide for Hartford with six free throws. Sophomore guard Dunne—who finished with a game and career high 25 points, seven rebounds, and three assists—chipped in five of his own during the stretch, which gave the Hawks a 27-23 lead heading into the locker room.

“We just came out flat in the first half,” Christian said of his team’s sluggish close to the half. “This is a game where someone needed to step up from an energy standpoint.”

The players appeared to heed his message coming out of the locker room. Just 30 seconds into the closing stanza, the Eagles had a quick five points and were suddenly moving in the half-court offense. But that’s when Dunne—who had 18 of his points in the second half—erupted. In the next five minutes, he scored eight of the Hawks’ 10 points, drilling two threes in the process.

In fact, Dunne’s long range prowess was indicative of a team-wide blitzkrieg in the second half. Hartford went 8-for-16 from downtown in the frame, looking a lot like the team that shot nearly 40 percent from 3-point range coming into the game.

“That team was a very good 3-point shooting team and we knew that’s how they could beat us,” Christian said. “We just needed to execute better.”

After a pair of Dunne free throws, Hartford held a 51-41 lead with nine minutes remaining. But after a long stretch of sloppiness, BC finally found its offensive groove. Turner—who finished the game with 13 points and a career-high seven assists—turned the free throw line into his own personal office. He had two jumpers from that spot and three assists during the run.

Compensating for a poor shooting night, BC crashed the boards late in the second half, grabbing six offensive rebounds in the final 10 minutes and earning 10 second-chance points. They also took advantage of the Hawks’ 18 turnovers, scoring 15 points off of turnovers in the second half.

Tava embodied both of these foci. Trailing 56-49 with four minutes remaining, he grabbed two offensive rebounds, finished a three-point play and forced a turnover that led to a Jordan Chatman three that gave the Eagles a 57-56 lead.

With both teams going blow-for-blow over the final two and half minutes, the game finally got interesting. After a three from Ross, Chatman was the recipient of a flagrant-1 foul. He sank the free throws, and BC made use of the extra possession, with Mo Jeffers tipping home a Robinson miss.

Trailing 61-59 with under a minute to go, the Hawks didn’t panic one bit. Lynch, a 58 percent shooter from behind the arc, drilled a 3-pointer with two seconds remaining. From there, both sides had their shining moment, with Dunne’s three ultimately topping Robinson’s timely floater.

But, for Christian and his team, the truth is that they didn’t lose this game in those gut-wrenching moments. They lost it before Robinson’s desperate half court heave fell harmlessly to the floor, before the game had even begun.

“I don’t think we came to win today,” Christian said. “We’ve got to act like a team that wants to win.”

The lack of energy, especially in the first half, was surprising and disappointing to the coach.

“When you come into the game, you’ve got to come in with ridiculous energy and I don’t think we had anybody do that,” he lamented. “We played 11 guys in the first half and somebody had to make a play.”

Coming off of a second upset in a nonconference schedule that is currently ranked 333th by kenpom.com, the Eagles needs to find their groove with ACC play just three weeks away. And if they fail to come out with the requisite energy in those games, they’ll long for the days where that type of effort meant only losing by a buzzer beater.