Home » Eagles Collapse in Second Half Against Wake Forest 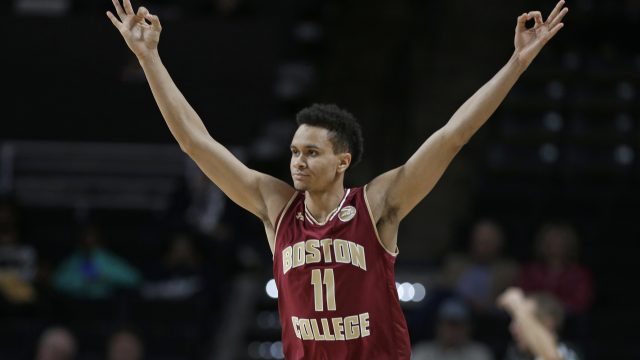 Eagles Collapse in Second Half Against Wake Forest

As any Boston College fan will tell you, to compile an infamous losing streak, a team’s lack of talent and poor execution must be coupled with some bad luck. While a conference bottom-feeder will likely lose most of its games, it usually comes across a lucky stretch in at least one game that produces a victory against a superior team. Last season, BC men’s basketball failed to win a single Atlantic Coast Conference matchup, even though other comparable Power Five teams, such as Rutgers and Minnesota, managed to eek out at least one victory apiece. Lack of luck played a part in this—evidenced by BC’s ranking 313th in kenpom.com’s Luck metric, which measures the deviation between a team’s actual winning percentage and what one would expect from its statistics and the margin of victory in its games.

While not necessarily knowing the numbers, the team’s general lack of luck usually lends a pessimistic lens to fans’ viewing of BC games. So as Dinos Mitoglou’s layup attempt early in the second half hung motionless on top of the rim for several seconds, before gravity finally kicked into effect and dropped the ball through the hoop, you wouldn’t blame those conditioned by last year’s losses for immediately assuming the Eagles would drop this game too, despite their three-point lead.

Unfortunately for Eagles’ fans, on Tuesday night, this instinct was painfully accurate, as Mitoglou’s layup sparked a 26-7 Wake Forest run that ultimately gave the Demon Deacons a 79-66 victory over BC (8-7, 1-1 Atlantic Coast), halting the momentum that the Eagles built in their 96-81 thrashing of Syracuse on New Year’s Day.

The first half constantly went back-and-forth, with neither team building a lead larger than five points. Despite just three points from Ky Bowman and a poor 3-of-15 performance from the team beyond the arc in the half, a far cry from the 61.5 percent they shot against the Orange on Sunday, BC headed into the locker room with a narrow 37-35 lead behind a concerted effort to attack the rim and a balanced scoring effort that saw bench players contribute 16 points. The team scored 20 points in the paint in the first half. Robinson and A.J. Turner each had eight points, while freshman center Nik Popovic chipped in with nine points, playing major minutes after Mo Jeffers—who offered onlookers his best Idy Diallo impression by fouling out in just eight minutes—picked up two early fouls.

The Eagles frequently used a pindown on the weak side of the floor, with either Bowman or Robinson coming around a Popovic screen and getting space for a jumper or slipping a pass to the Bosnian under the hoop. Also, much like the Syracuse game, Jim Christian had forward Connar Tava facilitate offense from both the elbows and the low post. The graduate transfer had three assists in the half, with ball movement off of his passes generating additional baskets.

Wake Forest (10-5, 1-2) countered with a heavy dose of post play against one of the smallest frontcourts in the ACC. Collins, who entered the game averaging a team high 16.4 points per game, had 10 points in the frame, catching an alley oop and making several other athletic finishes around the rim. Mitoglou, a more ground bound big man, displayed a nice face up game, shooting over the top of the smaller Tava on several occasions. Point guard Bryant Crawford shook off a poor shooting half and distributed the ball with aplomb, finishing the half with six dimes, including the lob that Collins threw down.

The second half began much like the first half, with both teams trading baskets. After a Robinson triple generated by a nice kick-out pass from Jeffers, the Eagles took a 43-38 lead with 17 minutes remaining in the game. But immediately following the pass, BC’s veteran center picked up his fourth foul and headed to the bench. From that moment, the Deacons forced the ball into the post frequently, with Mitoglou and Collins feasting upon the smaller BC frontcourt, which often had the 6-foot-6 Tava playing at center. Wake Forest scored 14 points in the paint during their 26-7 run, following Mitoglou’s hanging layup. And when BC doubled the post, the Deacon’s big men whipped the ball around the court to open shooters.

After a Turner jumper with 14:32 remaining in the closing stanza, the Eagles failed to convert a field goal attempt for nearly nine minutes. A Bowman layup with just under six minutes to go in the contest snapped the frigid spell, but the damage had been done. In the second half, BC shot just 24 percent from the field, had six points in the paint and no points from the bench. The easy ball movement of the first half petered out and Tava received fewer opportunities to facilitate from the post.

“In the second half, I thought we settled for 3s, and we stopped attacking the basket,” Christian said. “We can’t shoot the ball that poorly and go win on the road in this league.”

While Bowman and Robinson picked up their aggression in the game’s waning moments—each shot at least six free throws in the second half and Bowman had an impressive chase down block on Crawford at the rim—they appeared to sometimes be playing a bit fast. Bowman in particular appeared a little too amped for his first ACC road game, shooting just 3-for-15 from the field and often clattering into the lane without a plan, throwing up wild and off balance floaters.

However, in comparison to BC’s last visit to Lawrence Joel Veterans Memorial Coliseum—where an Eli Carter-led squad languished in the first half of an embarrassing 74-48 defeat, falling behind 37-4—this defeat will likely be easier to swallow for those in the locker room. Christian knows that this defeat is certainly not the product of waning effort or of anyone’s poor shot selection.

Bowman will learn to slow the game down on the road, playing at his tempo, like he did against Syracuse. And a team that entered the game with the eighth best 3-point shooting percentage in the country—40.9 percent—will likely not shoot 5-for-30 from beyond the arc again.

If the Eagles can maintain their offensive aggression and their big men can avoid foul trouble against the giants of the ACC—one of the more crucial items to watch over the remainder of the conference schedule—they should be able to put forth a respectable showing. Certainly, a better performance than last year is to be expected.

And perhaps, the team’s talent and commitment to playing for each other will take them beyond a place where BC fans fear the worst when a simple layup tickles the twine.