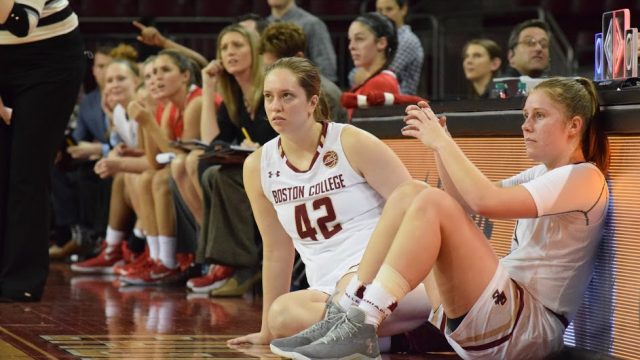 In Boston College women’s basketball’s game against the University of Pittsburgh, the bench brought the energy—for both teams.

BC (8-7, 1-1 Atlantic Coast) never led in the game, but at least kept it close during the first quarter. After allowing the Panthers (10-5, 1-1) to build up a 10-2 lead, the Eagles stormed back, cutting the deficit to as close as 11-7. But BC couldn’t finish strong, and Walters made a pair of free throws to score the final points of the quarter and bring the score to 15-7.

Pitt began to really pull away in the second quarter as BC struggled to contain Walters. She scored eight points in a row for the Panthers to cushion the lead, and her scoring streak was only snapped when Bradley drained a 3-pointer to bring the score to 26-12. Another Walters layup and a pair of free throws from Martina Mosetti set the halftime score at 28-14.

The third quarter was the only period of play that saw BC outscore Pitt—the Eagles tallied 14 points to the Panthers’ 11. Even so, Pitt maintained its comfortable lead thanks to contributions from Walters, Brenna Wise, Aysia Bugg, and Cassidy Walsh. At the beginning of the fourth quarter, the Panthers held an 11-point lead with their 39-28 advantage.

Guy and Bradley opened up scoring in the fourth quarter. Fasoula dished to Guy, who drained a jumper to officially open scoring. On the very next possession, however, Bugg found Bradley open beyond the arc, and Bradley sank a trey to cushion the lead even more. Neither team scored for more than a minute before Bradley made another three, bringing the score to 45-30.

With four minutes to go, Guy made a pair of free throws to reduce the lead to 10. Wise made a jumper, but Kailey Edwards sank two shots from the charity stripe to cut it to 10 again. Wise made another layup, but finally the Eagles were able to cut the lead to single digits when Emilee Daley made a trey to bring the score to 51-42. BC could come no closer to the lead, however, with Pitt pulling away thanks to late points from Bugg and Jasmine Whitney.

In the end, both teams struggled to have starters dominate the game. Mariella Fasoula and Kelly Hughes each scored eight points, the highest number for any starter. Meanwhile, Mosetti and Georgia Pineau scored five apiece, while Edwards contributed just two points. On Pitt’s side, Wise scored 15, but no other starter scored more than five points.