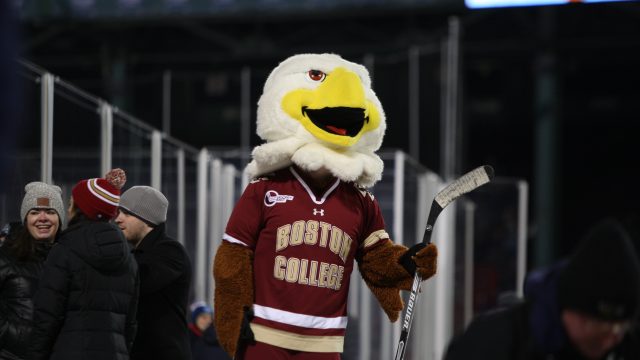 BOSTON — Sometimes it’s hard to see why Hockey East decides to force its teams to go outdoors in the dead of winter. After all, frigid temperatures and heavy snowfall in Boston during January are as common as another broken ceiling tile on the eighth floor of Walsh Hall every Saturday. It’s even harder to understand it when 6 to 12 inches of snow barrels through to delay the game a full day.

Yet ask any fan, coach, or player why it’s worth it, and they’ll give the same response: Fenway Park. There’s a unique mystique that surrounds the 105-year-old home of the Boston Red Sox. Regardless of the sport being played, every young New Englander wants the chance to play in the shadow of the Green Monster. And since 2010, the conference has given its teams the Frozen Fenway competition to help its players live out that chance.

So it’s only fitting that a freshman from Texas would get the game-winning goal for Boston College men’s hockey.

With 3:11 to go in the game, Parker, Texas native David Cotton, took advantage of a key interference penalty by Providence College’s Brian Pinho. Cotton, one of the BC’s most important young offensive contributors, rocketed a power-play goal past goaltender Hayden Hawkey. The goal locked up a 3-1 win for the Eagles, helping them maintain their lead atop the conference. BC’s win also keeps it in front of Providence in the PairWise Rankings, as each game becomes increasingly important for NCAA Tournament berths.

After a back-and-forth first period that saw little action, BC (14-7-2, 9-1-1 Hockey East) opened the second as it usually does: on the penalty kill. Though the team successfully killed off an Austin Cangelosi trip, it couldn’t keep the Friars (8-7-4, 1-5-2) down for long. Under 30 seconds after the Cangelosi penalty was erased, Jesper Mattila was called for a high stick.

The extended time on the kill allowed Josh Wilkins to go five-hole on BC netminder Joe Woll. After receiving a sharp feed from Brandon Duhaime behind the net, Wilkins slid in from the right circle to go stick-side on Woll to give Providence a 1-0 lead.

It wouldn’t be long before the Eagles reclaimed the lead. During a media timeout, Cangelosi took defenseman Michael Kim aside. The right-handed center is one of the best players in the country off the draw. Cangelosi knew he’d be receiving the faceoff as soon as play returned. Kim, a rising offensive blue liner for Jerry York’s crew, has a deadly one-time shot from the right side.

“He just told me to be ready for it,” Kim said of that exchange.

Sure enough, he was. Kim ate up Cangelosi’s faceoff winner, slightly allowing his momentum to pull him in toward Hawkey. His blast rocketed past the Providence goaltender to knot the game up at one.

After so many special teams advantages in the first two frames, the Friars got away from their game plan. Providence allowed BC to get three power-play opportunities in the third period. It’s something that head coach Nate Leaman said has been a struggle for his team all season. When they’re disciplined, the Friars can match up with anyone. But when they head to the box—especially when two of them are captains—it’s hard to win games.

“We found a way to not be successful in that game because of our lack of discipline,” Leaman said.

Through the first two penalties, the Friars held serve. But on the third, they broke down.

With time expiring in regulation, Pinho laid out Matthew Gaudreau with a huge hit, leading to an interference penalty. Gaudreau spent a couple of minutes on the ice being tended to by the BC medical staff, giving the Eagles new life. With a power play led by Ryan Fitzgerald, returning from a lengthy ankle injury, BC swarmed Hawkey on net. Cotton took advantage of a broken play, as the Friars brought pressure on the penalty kill. J.D. Dudek lofted the puck back to Cotton between the circles. From there, he just let luck take its course.

“The ice was kind of chippy, so I just wanted to get it on net,” Cotton said, noting the difficult conditions on the Fenway ice.

Moments later, Cangelosi put the finishing touches on a strong performance with a breakaway empty-net goal. But it was Cotton who came away with the signature moment. It’s yet another highlight to a strong start at BC. Thrust into an unexpectedly large role because of the massive exodus of underclassmen over the summer, Cotton’s quick development has been a huge benefit for BC men’s hockey. He already has seven goals and seven assists while spending much of his time on the second line. And today, he notched another career milestone.

“This was my first time playing an outdoor game,” Cotton said. “It was a little chilly.”

It’s not surprising that it was a cold night, weather-wise, for the Texas native. But despite biting winds and below-freezing temperatures on the Frozen Fenway rink, Cotton remains red hot.