Home » Turnovers Prove Costly for Eagles in Loss to Syracuse 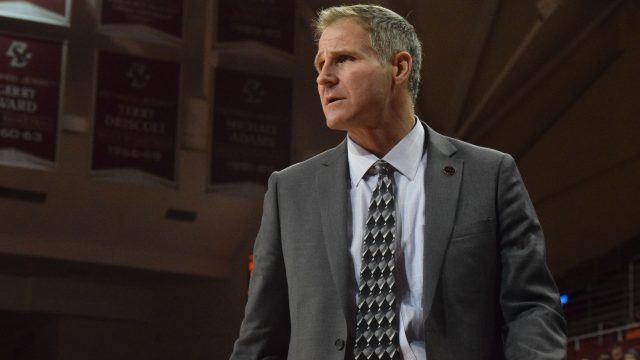 Turnovers Prove Costly for Eagles in Loss to Syracuse

The Eagles traveled to the Carrier Dome in upstate New York to play Syracuse University on Sunday, fresh off a loss to the University of Pittsburgh earlier in the week. And despite strong performances from Kelly Hughes, Georgia Pineau, and Emma Guy, the Eagles fell to the No. 25 Orange by a score of 79-52.

Turnovers in the first quarter prevented BC (8-8, 1-2 Atlantic Coast) from jumping out to a strong start. The first turnover occurred less than 15 seconds into the game, as Kailey Edwards lost possession of the ball. It took BC almost a minute and a half to score its first points of the game, coming in the form of a jumper from Martina Mosetti. But despite scoring efforts from Mosetti, Guy, Hughes, and Emilee Daley, the Eagles couldn’t build up a lead. Throughout the quarter, Syracuse (12-5, 3-1) forced the Eagles into 10 total turnovers and dominated play, so that the first quarter ended with Syracuse leading 21-14.

The Eagles managed to cut down on turnovers in the second quarter, but still lost possession of the ball six times. Hughes continued to lead the way for the Eagles, shooting well from behind the arc. She would finish the game 4-for-7 from 3-point range with 12 points total. While BC outscored Syracuse 17-15 in the quarter, the Orange’s lead entering the period meant that it still held a 36-31 advantage at halftime.

Syracuse opened scoring in the third quarter with a 3-pointer from Brittney Sykes. Taylor Ortlepp sank a trey of her own only seconds later, bringing the deficit back to five points. But the Orange dominated scoring in the third quarter, scoring 27 points to BC’s nine and pulling out of reach. Because of this, BC stared at a 63-40 deficit entering the fourth quarter.

The Orange only extended its lead in the final quarter of play. Syracuse’s Briana Day scored the first five points of the quarter for her team before Abby Grant sank a trey to increase Syracuse’s lead to 71-43 with just about eight minutes to go in the game. Although the Eagles would go on to outscore the Orange during the final eight minutes, the damage was done as the Orange secured its third-straight conference victory.