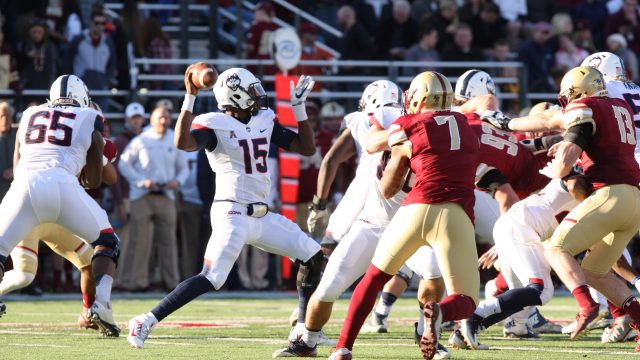 Head coach Steve Addazio had a tough sell: convince star defensive end Harold Landry to bypass the 2017 NFL Draft—and the four year, multi-million dollar contract that would likely accompany it. But, on Monday evening, Landry was sold. The nation’s leader in sacks and forced fumbles will return for his senior season on the Heights, as first reported by ESPN’s Brett McMurphy.

Landry began his junior year as an unknown on the national stage, but after posting 16.5 sacks, 22 tackles for loss, and seven forced fumbles, he shot up the draft boards. The latest Yahoo! Sports mock draft projected Landry to be selected 26th overall by the Green Bay Packers.

The Spring Lake, N.C., native tested the NFL waters following BC’s bowl victory against Maryland, receiving feedback from pro scouts and general managers regarding his draft stock. Most teams that run a 3-4 defense saw potential in Landry as an outside linebacker at the next level. Those that operate in a 4-3 scheme, however, questioned whether he has the size to set the edge on NFL tackles. Ultimately, though, the reviews weren’t enough to sway Landry away from Addazio’s program, one which is looking to build on its 7-6 campaign in 2016.

“It was important for me to finish what I started at Boston College—to prove that I have the talent and drive to be a first-round draft pick and to earn my degree from one of the nation’s premier academic institutions,” Landry told BCEagles.com. “Our team has a special chemistry and I am so excited to know I will have one more season to play with my teammates. I really believe in what Coach Addazio is building here and look forward to help this team compete for a championship.

Among Landry’s many accolades in 2016 were All-American honors, an appearance on the AP All-ACC First Team, and a selection as one of six finalists for the Ted Hendricks Defensive End of the Year Award. In his final season, Landry may have his eyes on a seemingly untouchable BC record: Mathias Kiwanuka’s career mark of 37.5 sacks. Ranked fourth on the the Eagles’ all-time list with 19.5 for his career, Landry would need a whopping 18 sacks to tie the record.