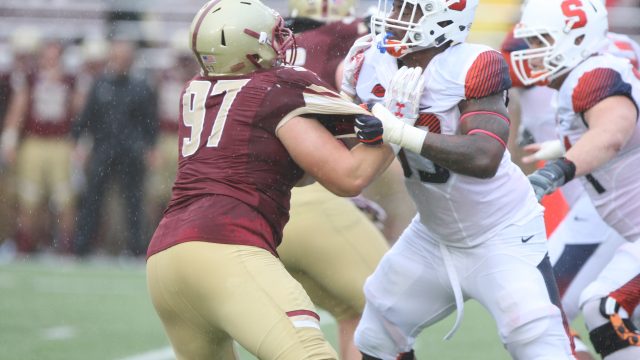 Mike Ruth Tapped For The College Football Hall of Fame

Former Boston College defensive tackle Mike Ruth is now a member of the 2017 class for the College Football Hall of Fame.

The National Football Foundation and College Hall of Fame announced the complete 2017 class on Monday. Ruth joins Steve Spurrier, Peyton Manning, and Brian Urlacher, among others, for induction into the Hall of Fame later this year.

Ruth played at BC from 1982-1985, recording 344 total tackles and 29 sacks over the course of his career. In 1985, the Football Writers’ Association of America awarded him the Outland Trophy, given annually to the the nation’s most outstanding interior lineman. The Eagles went 31-16 in his four years with the program and made three trips to bowl games, including a victory in the Cotton Bowl in 1984.

BC named Ruth its Eagle of the Year in 1986. He is in the school’s Varsity Club Hall of Fame and his jersey has also been retired.

Ruth joins nine other former Eagles in the College Football Hall of Fame, including his former teammate, Doug Flutie.