Home » Connecticut Moves Football Game With BC to Fenway Park 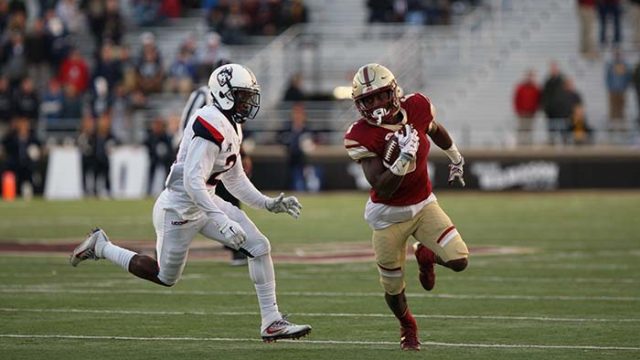 Connecticut Moves Football Game With BC to Fenway Park

Connecticut struck a deal that will benefit both it and Boston College football when it announced the moving of Nov. 18’s matchup from Rentschler Field to Fenway Park on Thursday evening. The Huskies sacrifice a home game, but will be paid $1.125 million—the largest game guarantee in program history—by Fenway Sports Management in return. Additionally, they’ll receive 22,000 of the 39,000 expected tickets, compared to just 7,000 for the Eagles. The remaining 10,000 tickets will be distributed by Fenway Sports Management.

It’s a win-win. Players get the chance to compete in the shadow of the Green Monster—a childhood dream for many—and soak in the added publicity that would otherwise be absent from a run-of-the-mill New England showdown. Plus, BC fans won’t have to trek from Chestnut Hill to East Hartford anymore. Instead, they have the luxury of watching the game from one of the most attractive ballparks in baseball—if they can find tickets, that is.

“This is a great opportunity for our fans to see us play seven games in Boston, our players to experience a world-famous venue, and to showcase New England and ACC football with the ‘Football at Fenway’ series,” Director of Athletics Brad Bates told BCEagles.com. “We are excited about the chance to play a game in one of American’s [stet] most iconic sports venues.”