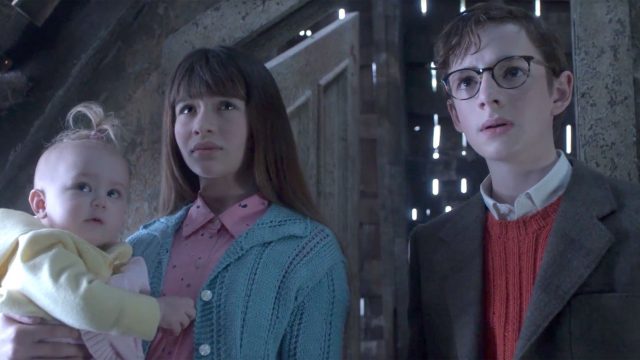 A mysterious fire, a trio of unusually brilliant siblings, and a villainous Neil Patrick Harris are the recipe for a deviously delectable treat—one that takes the form of Netflix’s newest show, A Series of Unfortunate Events.

A Series of Unfortunate Events begins in the way anything starring Harris should— with a song. The eerie musical warning that urges all children to “Look Away” from the tragedy that is about to unfold flows into the introduction of Lemony Snicket (Patrick Warburton). Standing in an underground sewer of sorts, he too admonishes any potential viewer of this story, even presenting an opportunity for whomever may be watching to turn off the show right then and there. This opening sets the precedent for Snicket’s tendency to directly address the audience, serving as an intimate narrator of these strange events.

Once Snicket assesses that this audience is here to stay, he dives into the world of the Baudelaire children. The oldest child Violet (Malina Weissman) is the inventor of the family whose inspiration only occurs under the influence of her tied-up hair, the middle child Klaus (Louis Hynes) is the genius and book worm who assists his sister’s creations. Sunny (Presley Smith), a mere infant, contributes to the sibling production via her teeth that can cut any substance, including stone.

While the children are perfecting a new invention on what they deem a brilliant beach day—gray and cloudy—their cough-prone family banker, Mr. Poe (K. Todd Freeman), unfeelingly informs them about the death of their parents in a devastating fire. With the fire went their entire family estate, and now they are left with nothing but hefty finances that can only be accessed when Violet is of age. Not to worry, the children will be immediately placed in the hands of their closest relative.

By “closest,” however, Poe means only physically nearby, cuing the entrance of the most sinister  actor-turned-guardian possible: Count Olaf. This distant relative of the Baudelaires will prove to be the new root of all their misfortune, from his demands for them to polish his insanely dilapidated mansion to cooking for his huge theatre troupe and more. All the while, the mystery of what really happened to the children’s parents lurks continuously in background.

A Series of Unfortunate Events is a visual feast for the eye, invigorating a bleak tale with gleaming color. Every setting teems with magic, whether it be the grand Baudelaire mansion or the filth ridden manor of Olaf. The poignantly upbeat underscore also intensifies the crises of the plot. The humor, however, contrasts with the intensity and allows relief from an otherwise completely tragic endeavor.

The show also achieves the impossible—making audiences love Harris even more than before. Well, at least they may now love to hate him. He breaches new territory in this crooked role, galvanizing the notorious villain with heinous spunk and rocking viewers back and forth from laughter to fear.

Netflix’s newest original show A Series of Unfortunate Events grasps despair with dark humor, and, contrary to the series’ opening credit song, we can’t look away.

a series of unfortunate events neil patrick harris
New York Times Published Study Has BC Among Nation’s Wealthiest
Previewing BC Hockey 2016-17: What to Expect From UMass 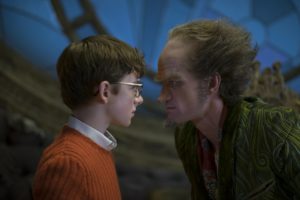