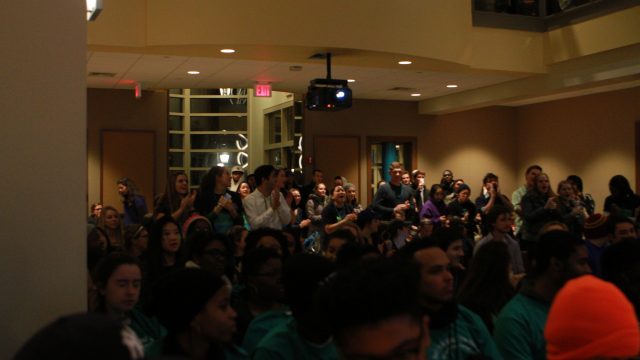 With Inauguration Day around the corner, Boston College’s Civic Engagement Committee hopes to bring students together to witness the event.

The Civic Engagement Committee will host an Inauguration Day watch party for students on Friday morning at 11:30 a.m. in the Vanderslice Cabaret Room.

The Civic Engagement Committee is a group made up of members of Student Affairs and the Office of the Dean of Students, as well as students from the Undergraduate Government of Boston College and the Eagle Political Society. The purpose of the group is to plan programs that allow students to be more civically engaged.

Lisa Berasi, the communications specialist for the Division of Student Affairs and a member of the Civic Engagement Committee, said the group has been pushing for programs more than ever this year. Its goal is to host a couple of programs each month that may feature documentaries, professors, or lecturers. The committee is planning to have a lecture on climate change and another on trade relations in the near future.

“Particularly in this election and political climate, we want to offer students programming that will create dialogue and that will push each other to engage,” Berasi said.

Berasi feels that students are often stuck in bubbles, conversing only with students who share similar political beliefs or have similar socioeconomic statuses. The programs created by the committee are meant to burst that bubble. The group hopes to bridge the polarizing gap that exists between students of different political parties, Berasi said.

The committee has hosted watch parties for inaugurations in the past and hopes that this one draws a crowd of students. Insomnia Cookies will be available to students in attendance.

Michael O’Brien, MCAS ’18, will be attending the watch party on Friday morning.

“I think it’s important for us to see the peaceful transition of power between two administrations,” O’Brien said. “I plan on going to this event to hear what the other side has to say about some of the most important issues. I think liberals and conservatives need to listen to each other more often.”

Some students will experience the hype of the inauguration closer to the capitol.

Rachel Simon, CSOM ’18, will travel with a couple of her roommates to Washington, D.C., to participate in the Women’s March on Washington, which will take place on Saturday. The march is a part of a national walkout in support of women’s rights and gender equality.

Simon and her friends bought tickets to the inauguration in October, before the results of the election were announced. Simon had a strong feeling Hillary Clinton would win. When she heard Donald Trump won the election, Simon and her friends had a discussion about whether they wanted to attend his inauguration, and ultimately agreed that they were not comfortable doing it. When they found out that the Women’s March was happening, they became excited and felt it was a great way to get use out of their tickets.

“I think it’s going to be an incredible juxtaposition of two very different sentiments,” Simon said.

Simon and her friends agreed that they have been sheltered from the drastically different views a large portion of the country has. This realization made them more passionate to speak out for their beliefs and principles.

“Watching the incoming administration come in has solidified a lot of my views in a much more defined way—and one of those is definitely women’s rights,” she said.

As a member of Strong Women, Strong Girls and a board member of the annual Women’s Own It summit, Simon is involved in women’s rights issues on campus. While in D.C., Simon will be meeting with the founder of Own It, who created the conference while at Georgetown. She also interns at The Consortium on Gender, Security, and Human Rights, an organization that seeks to educate people about how gender impacts their role in conflict and post-conflict resolution.

Simon and her friends left for D.C. on Wednesday night and will stay through the weekend. Simon looks forward to the march and how it will inspire young women to become activists for change.

“The march will be a nice way to feel a sense of empowerment and make a statement,” she said.