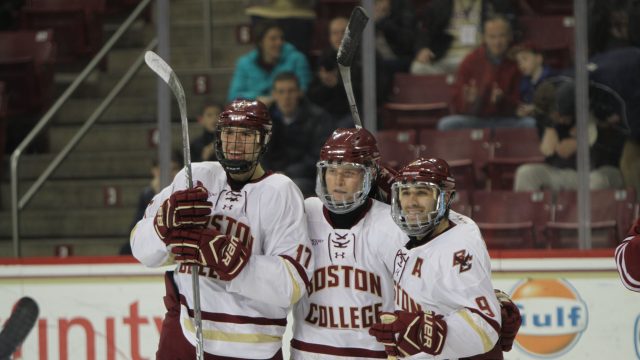 Men’s Hockey Shows Off Depth, Cruise to Win Over UMass

Boston College men’s hockey had already put up one of its best periods of the season to open its Friday evening tilt with Massachusetts. Entering the final faceoff, the Eagles had already outshot Hockey East’s basement dwellers, 13-1, and found the net twice, a stifling performance on both sides of the ice.

Yet a two-goal lead was insufficient for Christopher Brown. After all, his team was 1-4-1 in its last six and were coming off a weekend sweep by archrival Boston University.

So with under 10 seconds remaining, Brown ripped a Hail Mary-esque shot from the bottom of the left circle. The puck had knocked off UMass goaltender Ryan Wischow just barely, trickling down to Austin Cangelosi on the right side of the crease. The bantam yet speedy senior had already raised his hands as he poked the puck, its meeting with the twine an inevitability.

“I couldn’t tell how many seconds were left, but I knew it was low,” Brown said of his last-second heave. “I think it hit three different people to find its way in.”

What had been a frustrating period for the Minutemen quickly turned into a demoralizing, defeated crawl off the ice, and desperation to leave Chestnut Hill as fast as possible.

Cangelosi’s last-second goal chased Wischow from the game. But his replacement didn’t fare much better. With goals from six different players—three against Wischow, three against Nic Renyard—the Eagles cruised to a 6-1 victory over the Minutemen, staying atop the conference standings. BC outshot UMass, 46-13: the second-most shots taken by BC this season (Dec. 30 vs. Ferris State) and the fewest shots allowed.

The Eagles (15-9-2, 10-3-1, Hockey East) overwhelmed Massachusetts (5-17-1, 2-9-1) early on thanks to some of the crispest passes they completed all season. Unlike their games over the weekend against the Terriers, they easily connected with one another to put up those Grade-A scoring chances. Wischow withstood the attack at first, but it wouldn’t last.

Eight minutes into the first, BC’s second line struck. Cangelosi danced along the far corner on Wischow’s right, drawing in several UMass defenders. The decoy left David Cotton all alone on the left, and Wischow had no idea. The freshman from Parker, Texas slapped one into the empty space for the game’s first strike.

Though Cangelosi set up that goal, he nearly lost the momentum with a tripping penalty seconds later. Yet, unlike the conference’s other top teams, the Eagles had little to fear from their Bay State foes, from whom they’ve notched a point in each of their last eight matchups. Sure enough, it didn’t take long for UMass to negate its gift. Ray Pigozzi got called for interference in the middle of setting up an offensive play, creating a 4-on-4.

Now at even strength, BC’s depth showed off again, this time courtesy of the third line. Defenseman Scott Savage fought off two UMass attackers at center ice, dumping the puck off to Luke McInnis. Skating down the near boards, McInnis hit Julius Mattila in stride. The Finnish freshman slammed it strong enough at Wischow’s five-hole that it snuck through for a 2-0 lead.

So Renyard stepped into the crease to start the second, hoping for an easier time against BC’s forwards. And at the beginning of the second, the Minutemen snatched the momentum back. During a 4-on-4 midway through the second period, Pigozzi made up for his penalty flub by toasting Jesper Mattila on a defensive breakdown to cut the lead to 3-1.

Yet the advantage didn’t last long. With three minutes to go in the second, Scott Savage fit the puck through the tiniest of windows on Renyard’s blocker side. By the time the third period rolled around, BC coasted, adding goals from Michael Kim and J.D. Dudek—the latter of which chased Renyard for Alex Wakaluk. Unlike the celebrations that come in tight games, where one goal might take a team from the depths of defeat, to escaping with a point, to even a victory, Kim and Dudek chose to go with the subdued, soft smile and hug combo.

Though a footnote in the box score with all the scoring, backup goaltender Ryan Edquist stood up again for the Eagles. Although he only faced 13 shots on goal, York said that he has been impressed with the Lakeville, Minn. native’s play, and with good reason—Edquist is 4-1-1 in six games. And while Joseph Woll has continued to impress, expect to see more of Edquist down the stretch.

“Ryan’s earned playing time,” York said. “The two games he played in Pittsburgh were excellent when Joe was gone. And you want to get a little more depth at all positions. … I wouldn’t have done it unless Ryan could handle it.”

Yet the offense was the real story. After a rough stretch to start 2017, in which the Eagles have gotten to several goaltenders but have had trouble finding the twine, York was pleased with his team’s ability to make the most of its opportunities. And with a real race to the finish in Hockey East to end the year, he hopes that the late outburst will push the Eagles to success going forward.

“A real workman-like effort for our team, we’ve finally been rewarded with some goals,” York said. “We’ve been getting some chances, but we want to get some red lights on.” 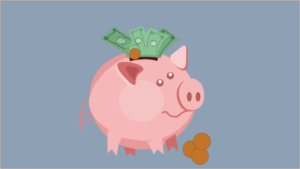