Home » Previewing BC Basketball 2016-17: What to Expect From UNC 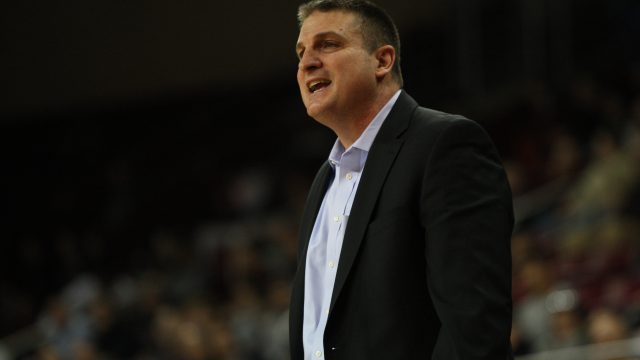 Previewing BC Basketball 2016-17: What to Expect From UNC

In the aftermath of Wednesday night’s dispiriting 71-54 defeat to No. 16 University of Virginia, Boston College men’s basketball faces a bit of a crossroads. Having secured two victories and demonstrated the immense potential of their young backcourt, the Eagles (9-10, 2-4 Atlantic Coast) have already surpassed the resume of last season’s team just six games into conference play—not to mention the expectations of much of the viewing public.

Some concerning trends, however, have started to make their way to the forefront in recent games. Excessive turnovers, poor 3-point shooting—the Eagles are shooting just 33.9 percent from beyond the arc in conference play, worst among ACC teams—and seemingly intermittent energy have plagued the team. As BC prepares to face No. 9 University of North Carolina (17-3, 5-1), head coach Jim Christian’s crew has arrived at a point where it must decide if it intends to keep pushing forward with the same determination and execution that led to two ACC wins or if it wants to go through the motions over its remaining games, content with its modest successes.

Against a conference rival and an opponent that will likely have a sizable fan base at Conte Forum on Saturday, this contest serves as an opportunity for BC to turn the tables and reclaim its upward momentum, even if it doesn’t exit the game with a victory.

Last Time They Played: Last February, UNC visited Conte Forum on a two-game losing streak and with a revamped starting lineup, as head coach Roy Williams benched starters Justin Jackson, Brice Johnson and Kennedy Meeks to begin the game in an attempt to awaken his stumbling team. Adding to all of this drama, Williams himself was forced to leave the game after collapsing on the bench during a TV timeout early in the second half. With all of these distractions as a backdrop, the Eagles nearly pulled off an improbable upset victory, falling 68-65 to the Tar Heels. Eli Carter had one of his best ACC games, scoring 26 points and drilling five 3-pointers, while Jackson led UNC with 20 points. In front of an unusually rowdy BC fan base, the Tar Heels didn’t have a lead in the game until the 3:55 mark of the second half. After a fadeaway triple from Carter gave BC a 60-59 lead with just over two minutes to go, senior guard Marcus Paige hit a 3-pointer from the wing to give Williams’s crew the lead for good. After a desperation half-court heave from Carter fell short at the buzzer, the Eagles dejectedly retired to the locker room, with the spirited effort reduced to a mere footnote on their march to infamy.

UNC Scouting Report: In the season following their heartbreaking defeat to Villanova in the National Championship game, the Tar Heels are as efficient as they’ve ever been under Williams, further developing the style they found so much success with last year. Joel Berry has admirably filled the shoes of Marcus Paige as both team leader and floor general. He averages 15.8 points and 4.2 assists per game, serving as an aggressive scoring point guard. Able to score in both pick and rolls and isolations, Berry’s offensive game is complete. He shoots 42.6 percent from beyond the arc and has an array of finishes around the basket.

Jackson has also picked up some of the slack in the absence of Paige, scoring a career-high 18 points per game, making 2.5 threes per contest, and shooting 39.5 percent from downtown. His outside shooting has drastically improved after combining to shoot below 30 percent from that range over his first two collegiate seasons. Jackson is a natural scorer and very comfortable shooting or driving to the basket coming off of screens. His floater, a weapon he has honed over the past few seasons, is deadly, especially along the baseline.

When the ball isn’t in the hands of their two perimeter marksmen, the Tar Heels funnel the ball down into the paint, to a trio of burly big men. Seniors Isaiah Hicks and Meeks serve as the starting frontcourt. Each of them possesses an ability to comfortably play with his back to the basket, though Hicks is the better post scorer of the two. Meeks nearly averages a double-double, with 12.7 points and 9.7 rebounds per game. He also serves as one of the best offensive rebounders in the country. 6-foot-11 Tony Bradley rounds out William’s frontcourt trio. The Floridian freshman—who missed UNC’s last two games with a concussion but expects to suit up against the Eagles—has shown tremendous poise in limited minutes, displaying a blossoming post game and instincts that have already made him the Tar Heels’ best shot blocker on a per minute basis.

With these three players, along with Berry and Jackson, Williams utilizes an up-tempo strategy—UNC ranks 20th nationally in possessions per game—and emphasizes crashing the glass when a shot goes up—the Tar Heels rebound an insane 42.7 percent of their own missed shots, the best rate in the nation. These two foci give UNC a bevy of extra possessions on which to score points. Though the team ranks just 51st nationally in field-goal percentage and doesn’t take many 3-pointers, it scores 89.4 points per game, fourth in the country. The Tar Heels’ constant assault on the paint leads many opponents to incur foul trouble, as only five teams have attempted more free throws than UNC this season. Sheer volume takes precedent over otherworldly efficiency in this offense.

The pace of the Tar Heels’ games can make their defensive numbers look pedestrian—the team allows 70.2 points per game. But according to kenpom.com, which considers performance on a per possession basis, in addition to having the top offense amongst ACC teams in conference play, UNC also has the top defense. It’s extremely difficult to score in the paint against the Tar Heels and once an opponent shoots the ball, they rarely generate second chances. In conference play, UNC has only allowed opponents to rebound 24.2 percent of their missed shots, the best in the ACC. The Tar Heels can sometimes be vulnerable to 3-pointers and big men that stretch the floor, luring Hicks or Meeks out of their comfort zone in the paint.

Finally, UNC has the 14th-most steals in the nation and excels at utilizing live ball turnovers to fuel their explosive, fast-breaking attack. Keeping the Tar Heels engaged in a half court game is often the only way to contain their talent.

1.) Limit UNC on the Offensive Glass—Despite starting an undersized frontcourt with 6-foot-6 Connar Tava and 6-foot-9 Mo Jeffers, the Eagles must find a way to keep the nation’s best offensive rebounding team off of the boards. If the Tar Heels start getting second chance opportunities, not only will they get open layups and dunks, but also free throws. Foul trouble for any of BC’s frontcourt players could spell doom for the team. Though it might eliminate some transition opportunities, the Eagles should concentrate on gang rebounding, with the big men focusing on boxing out the Tar Heels and the guards coming in to collect the ball. A dominant performance on the boards will nearly guarantee a victory for Williams’ team, as BC just doesn’t have the size to contain their opposition on a large number of chances in the paint.

2.) Control the Tempo—Even though the Eagles, particularly freshman point guard Ky Bowman, enjoy running in transition, Christian may want to consider playing at a slower tempo in this game. Along with keeping Hicks, Meeks and Bradley from getting offensive rebounds, this strategy aims at reducing the Tar Heels’ number of possessions. Since UNC isn’t the most efficient team, BC should focus on eliminating its extra possessions, which are a main source of its offensive success. Minimizing turnovers in the half court is crucial for the Eagles, who allow opponents to generate steals on 11.7 percent of possessions, 344th in the country. Additionally, much like Virginia did on Wednesday, BC must build a wall behind the half-court line in transition. Keeping the Tar Heels from running into the paint and forcing them to run half court offense will prove key in this matchup.

3.) Get Hot From Downtown—Over the last five games, BC has shot just 26.7 percent from beyond the arc, after entering that stretch shooting 40.9 percent, eighth in the country at the time. Once one of the hottest 3-point shooting teams, the Eagles have struggled lately to even convert open shots. Against UNC and their imposing length in the paint, BC must recapture some of their long-range magic in order to even sniff an upset. Bowman and Jerome Robinson—who have shot a combined 3-for-18 on threes in the Eagles’ last two games—will need to knock down their attempts, seeking spot up shots in lieu of contested, off the dribble threes. A huge shooting performance by either Jordan Chatman or A.J. Turner could swing the tide in this matchup.