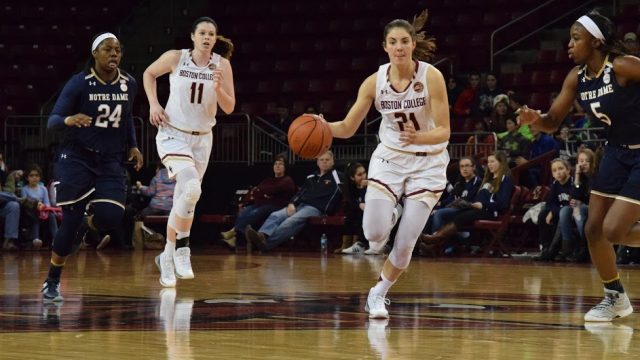 Head coach Erik Johnson’s squad was right where he wanted it to be.

As the final minute of the first half ticked down, the momentum began to shift away from No. 6 Notre Dame back to Boston College women’s basketball. What had once been a double-digit lead was now only seven points thanks to a Kelly Hughes 3-pointer, beautifully assisted by Mariella Fasoula. With five seconds remaining, Emma Guy found Fasoula in the paint for a signature scoop lay-in, cutting the lead to five.

But the No. 6 Fighting Irish weren’t done yet.

First Team All-ACC guard Lindsay Allen sprinted up the court and quickly drilled a buzzer-beating 3-pointer to extend the Notre Dame advantage before half. This was the theme of the day for the Eagles. Every time they started to build momentum, the Irish would answer with their own big play to extinguish BC’s hopes.

The Eagles fought hard, but a troublesome third quarter and the strong play of Notre Dame proved too much, as they were ultimately defeated 80-69 at home.

The Irish (17-3, 4-1 Atlantic Coast) are built around their two-headed monster of Allen and 6-foot-3 center Brianna Turner, who was voted ACC Player of the Year by coaches as a sophomore last year. While she and Allen were impressive, the damage was largely done by sophomore guard Marina Mabrey. Mabrey finished with a game-high 21 points, including seven points in both the first and third quarter. The Eagles (8-11,1-5) just could not seem to stop her as she shot 3-for-4 from behind the arc and 8-for-10 overall.

While many players in head coach Muffet McGraw’s lineup were remarkable, none of them played as well as the most dominant player on the court: BC’s Mariella Fasoula. Fasoula finished with 20 points and 14 rebounds, her fourth double-double of the season. She also added an impressive six assists, four of which came in the first half. It looked like Fasoula may have been on pace for a triple-double at one point, but a third-quarter slump by the Eagles made it so that many of Fasoula’s dishes were not capitalized on. What makes this even more impressive is that Fasoula took on Turner, a dominant defensive presence who ranks third on Notre Dame’s all-time blocks list.

Many of Fasoula’s passes were to Guy, who did a fantastic job finishing for BC and ended the night with 14 points. Australian freshman Taylor Ortlepp made her first start on Thursday, and while there were growing pains, she found her groove in the second quarter, hitting two 3-pointers. Although the Eagles played well at times, turnovers were still an issue, as they turned the rock over 20 times. That’s above their season average of 18.4, and the Irish capitalized on the sloppy play 23 points off these mistakes.

“We gave them transition, and a top-10 team makes you pay for it at the other end,” Johnson said, “And suddenly—bam! They’re up and they’re feeling good. And again what I say all the time when you find your character, you find out who you are when things get ugly, right? And we found out who we are—we’re a good, tough, hard-nosed team that kept fighting.”

Notre Dame ran out of steam in the fourth quarter, scoring only nine points, but at that point the damage was done. The Eagles battled back to within 11 points, but the Fighting Irish’s onslaught of 31 points in the third quarter proved to be too much for BC to overcome.

“Again, the question with this team is are we good enough with that?” Johnson said. “Or are we gonna keep that same fight, keep that same togetherness and now make two more plays and go beat Duke on Sunday? And for me, that’s all I’m excited about and I cannot wait to get back in the gym.”