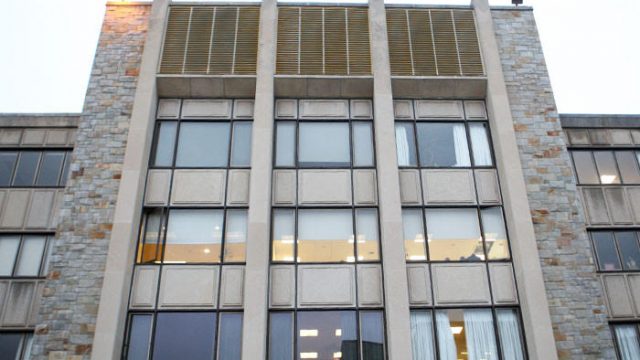 On the eve of the inauguration of a new American president, Hosffman Ospino, an assistant professor of Hispanic ministry and religious education at Boston College, called for Catholic solidarity with all immigrants, even those who are undocumented.

In a conversation on Thursday titled “Out of the Shadows: Illuminating the Dignity of Immigrants,” which was sponsored by BC Campus Ministry, Ospino was joined by Rocio Calvo, an assistant professor in the global practice concentration at the BC School of Social Work, and moderator John Glynn, a campus minister, to discuss the ways in which immigration, including unauthorized immigration, is affecting both the Catholic Church and the United States as a whole.

Ospino, himself an immigrant from Colombia, said that his research is increasingly focusing on the ways in which a recent influx of Latino immigrants is changing the Catholic Church in the United States.

He said that the United States Conference of Catholic Bishops (USCCB) issued a statement in 2000, “Welcoming the Stranger Among Us: Unity in Diversity,” which adjured Catholics to welcome all immigrants, and called for recognition of the value of unified diversity within the church. The USCCB also invited all Catholics to be aware of the fact that the anti-immigrant rhetoric that permeates social and political conversations is injurious not only to the those being disparaged, but also to the nation as a whole.

Ospino said that almost all Americans, with the exception of Native Americans, are either immigrants themselves or descendants of people who at one time immigrated to the U.S. Currently, he said, around half of the 42 million immigrants in the U.S. are Latino, 25 percent of whom are undocumented.

While immigrants today comprise around 10 percent of the U.S. population, at certain times in the nation’s history that figure was nearer to 50 percent, Ospino said. He warned that if Americans forget that they or their ancestors were once immigrants, he fears that they may fail to be just to the next generation of immigrants currently entering their country.

“Every one of those immigrants brings a gift—a gift to society, a gift to the Church, a gift to our educational institutions, and ultimately, to the United States as a nation,” Ospino said. “We need to acknowledge that immigrants are important—are essential—to building this society.”

Ospino also said he believes that Catholics have a responsibility to embrace immigrants because they’re human beings with an inherent dignity that should be honored as containing divine worth.

“[Valuing the dignity of immigrants] is just like seeing the face of God in them, recognizing the presence of Christ in them, and that’s what we have a responsibility to every immigrant,” Ospino said.

Calvo said she is also an immigrant, and that after she arrived in the U.S. she began her current research dealing with the effects of immigrants on American society.

In a few years, the U.S. will, for the first time in history, have a white minority. This seismic demographic change will cause many immigrants to lack access to education, job opportunities, and basic social services to become an unavoidable problem for America, Calvo said.

Ospino said that the Catholic Church, 50 years ago, was 90 percent European immigrants who were the objects of anti-immigrant rhetoric similar to that directed toward Latino communities today.

By 2050, however, the Catholic Church will be only 20 percent white, and most of this change has been due to the same patterns of immigration found in the 19th and 20th centuries. The Church is obliged not just to welcome immigrants, Ospino said, but to also build faith communities with their immigrant brothers and sisters.

“Being an immigrant is not easy—there are pains and struggles,” Ospino said. “In light of the Judeo-Christian tradition, we need to be human, and treat immigrants as humans, too.”

school of social work dignity for immigrants out of the shadows
Previewing BC Basketball 2016-17: What to Expect From UNC
Notebook: Defensive Strength Carries BC Past UMass