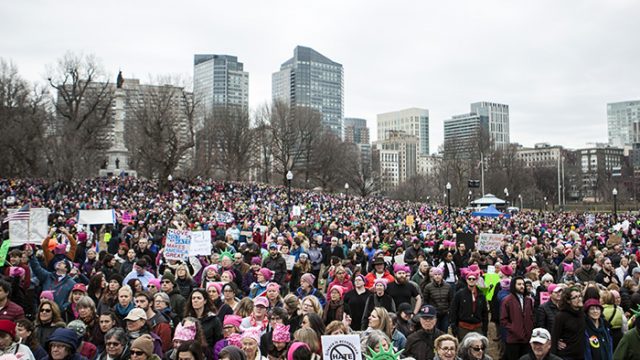 Early Saturday morning, cloudy skies drifted over Boston. Although not quite as strong as the city wind has been before, it still nipped at the shoulders of those out and about in the morning hours. But many of those people were wearing the now iconic pink-knit pussy ear hat. All were headed to the Boston Women’s March for America.

Although introductory speeches didn’t officially begin until 11 a.m., hundreds of eager attendees had already crowded around the large stage and screen where the speeches would take place. As they milled around, waiting for the events to begin, friendly interactions could be seen taking place between strangers as they complimented each other on a creative sign, or an inventive take on the pink pussy hat.

Shortly after 10 a.m., groups began arriving en masse, and soon, the Common was packed with over 125,000 people of all races, genders, ages, and backgrounds. The protesters transformed the grassy expanse into a sea of pink heads dotted with brightly decorated and inventive signs. Music began blasting over the loud speakers, and marchers began dancing to everything from Mary J. Blige to the soundtrack of the musical phenomenon, Hamilton.

As it grew closer to 11 a.m., the number of protesters climbed into the thousands. Although many of the marchers attended for different reasons, they were all united by a common concern for the future.

Gila Nolan, who experienced many protests during her time at Boston University in the early ’70s, said that she attended the March for too many reasons to count. But, most importantly, she wanted to send the message that nothing would keep her down. Nolan expressed her fear that the country has devolved over the past eight years, and that she now feels depressed and anxious. But attending the march gave her a slight change of mood.

Over 100 Boston College students were also in attendance, at least 70 arriving with the informal group organized by Molly Newcomb, MCAS ’18, and Olivia Hussey, MCAS ’17. Newcomb explained that they were marching to protest the rhetoric that was woven into the campaign and administration of Donald Trump—rhetoric Newcomb and Hussey said “normalized hateful viewpoints.” They also wished to stand in solidarity with marginalized communities around the country.

Newcomb explained that she and Hussey organized this BC contingent to present a united student front, and to provide a company for those who planned on attending the march without any one group. Newcomb also highlighted the importance of BC students engaging with the current political world.

“We recognized that [there] were instances in the fall in which BC students protested on campus regarding the national political climate, so we hope to connect BC students with the national march and mission,” Newcomb wrote in an email.

And, despite hectic traffic on the T, many students from BC arrived before the performances and speeches began shortly after 11 a.m. Each performance was accompanied by an interpreter who translated the words into sign language.

After an opening song by the Providence, R.I. singer and songwriter, Emeline, a series of performances from groups such as Voice Rising—a feminist chorus—took place before Mayor Martin J. Walsh, WCAS ’09 took the stage to deliver a passionate address.

Walsh told the crowd about the sickening feeling that he developed while watching President Trump take action after his first hours in office. But seeing the vibrant and fighting faces that filled the Common cured Walsh of that nauseous feeling, and drove him to consider what must come next.

Walsh stressed the importance of organizing everything from the neighborhood to women in the workplace, as assured those present that Massachusetts would be the first state to fight back against the Trump administration.

“We’re going to stand up, we’re going to take this fight from Boston Common to the Mall on Washington to let the president know that he’s supposed represent all of us,” Walsh said.

After Walsh concluded his speech, Senator Elizabeth Warren moved to the microphone to deliver a fiery speech. Warren highlighted the groups marginalized by the election, along with the struggles that they will face in the coming months, and explained that President Trump will attempt to rig an already uneven playing field in favor of those at the top.

“Now we can whimper, we can whine, or we can fight back,” Warren said. “We come here to stand shoulder to shoulder to make clear we are here, we will not be silent, we will not play dead, we will fight for what we believe in. We have a vision, and that vision defines who we are as a people. First we fight for basic dignity and respect for [everyone].”

Her powerful words proved to be the perfect jolt of energy that the endless crowd needed. Shortly after 1 p.m., the sun poked out from behind the clouds, the sea of pink hats began rippling, and the people of Boston began their march.