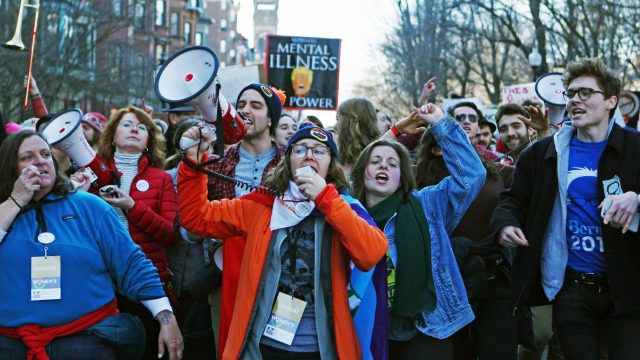 On Saturday, over 175,000 people took to the Boston Common to participate in the Boston Women’s March for America. The march was a part of a larger movement of similar demonstrations that took place in cities across the United States and around the world.

The Boston Women’s March had one of the largest turnouts, with the highest being at the Women’s March in Washington, D.C. The international initiative was planned with a positive message at its center, encouraging people around the world to stand up for women’s rights and equality. Over 100 Boston College students attended the march.

The tone of Saturday’s march contrasted that of Friday’s Resist Trump: Occupy Inauguration rally, organized by the Socialist Alternative and Socialist Students, as well as a number of other groups. On Friday, protesters took a more combative approach, with some choosing to burn flags in response to Trump’s inauguration as president, creating a much different scene on the Common and in the city streets.

While demonstrations such as marches and protests are paramount to combating oppression and giving a voice to the public, it is important to consider the message and motivation of these events. Those centered around a specific issue or cause, such as the Women’s March, are much more relatable and can attract significant attention, demonstrated by prominent speakers at Saturday’s march such as Boston Mayor Martin J. Walsh, WCAS ’09, and U.S. Senator Elizabeth Warren. Standing up for what you believe in is important, but doing it in a way that can effect real change is important as well.

One can learn more from one’s mistakes than successes, and protests such as the Women’s March represent a realization that a renewed spirit and steadfast unison is the only way forward.

And while protesting is a powerful medium, there are other concrete actions that students can take to contribute to the cause of the Women’s March in working for women’s rights and equality. Writing letters to and calling your congressmen and congresswomen is a concrete and direct means of influencing governmental decision making.

The congressman currently representing BC’s campus is Joe Kennedy, a relatively young politician with a progressive record in Washington. Students should also reach out to representatives in their home states, at the local, state, and national levels, to promote change from the ground up.

Furthermore, students should seek to become involved in local grassroots campaigns and activism. The Boston area is ripe with opportunities to work for women’s rights and other progressive causes, and organizations are always looking for young volunteers. It is imperative that the energy and passion surrounding Saturday’s march be translated into further action, and not die out abruptly.

Participating in a day of activism is good, but enacting continuous efforts to influence change is better and the only way that the goals of movements such as the Women’s March will come to fruition.

boston march women's
A Reservoir View of the End: TU/TD
The Mursday Effect Chapter 1: The World is Strange Here