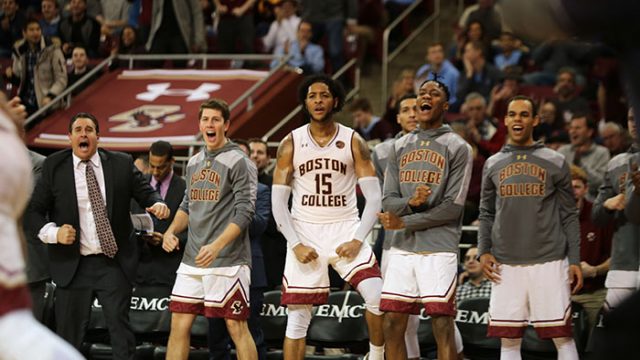 “Steve [Perpiglia] was my best friend on the team last year,” Gehan said of the 5-foot-10 Perpiglia, whose shoes, in comparison, are actually quite small. “He kinda taught me everything. I always followed him and did whatever he did.”

Perpiglia, a 2016 graduate, spent most of his Boston College career as a walk-on before earning a scholarship for his final semester from head coach Jim Christian following a Dec. 22 win against Fordham. The reaction of his teammates, including Gehan, was caught on tape and soon went viral.

“This is a program we’re building here,” Christian said in the video. “And people need to be rewarded for everything that they do.”

Perpiglia embraced the walk-on role with a sort of infectious enthusiasm that he would eventually pass down to Gehan. The most visible examples were at the end of the bench, where Perpiglia would dap up each teammate with his personalized handshakes. If someone sunk a huge three or slammed home a posterizing dunk, Perpiglia was the first one off the bench and on his feet, flexing at opponents or turning his 3-point celebration into a Zorro mask. And, considering the Eagles won just 15 ACC contests during his four-year career, those celebrations were often the most entertaining parts of the game.

But it was during practice that Perpiglia perfected his duties.

Aware of his place on the team, the Broomall, Penn. native always knew when to jump in a drill and when to back off—in essence, how to push the team to improve without actually playing. In practice, Perpiglia was many things: a silent spectator, an active team captain, a student of the game, but also a mentor to the younger walk-ons. Most of all, though, he was just happy to be there. Perpiglia went unrecruited out of high school and gained a spot on the 2012-13 roster in part because former coach Steve Donahue was a longtime friend of his high school coach.

They’re the chief tenets of the walk-on way of life: selflessness and positivity. Take Gehan’s pre-game ritual, for example, which carefully balances supporting his teammates while avoiding interfering with their focus.

“I wait and talk to all the starters,” Gehan said. “When they walk out on the court, I go by and give everyone a handshake or a high five, then I come back and sit. That’s what Steve did last year, so I’m doing it again this year.”

Of course, it’s not the only thing that Gehan inherited from Perpiglia. In the offseason, Gehan switched from No. 25 to Perpiglia’s No. 20 in an effort to “keep the walk-on dynasty of No. 20 going.” He also took over as the unofficial leader of the scout team, where he is tasked with, in Perpiglia’s words, “keeping the positivity up.”

Even Gehan’s goals for the future are the same as Perpiglia’s were during his time on the Heights.

“I just wanna see the program keep getting better and better,” Gehan said. “And to just do anything I can to try to help the team.”

But what about individually?

“I think it would be really cool to get a scholarship like Steve did in that situation,” he said. “They tell us a lot—but it shows that they really care about what we do.”

For all the hard work Gehan has put in behind the scenes, it would be fitting to see him receive a scholarship as a senior, just like his mentor did. Until then, though, the Dallas, Texas native’s moments in the spotlight will come in brief minutes during games in which the outcome is already determined. When Gehan subs in, the bench usually stands in anticipation. A section of students—some his friends, some strangers—scream Gordon’s name at the top of their lungs and encourage him to shoot every time he touches the ball. During the Eagles’ win against Dartmouth in December, Gehan attempted his only two shots of the season—one of which hit off the side of the backboard—and the crowd was as loud as it had been the entire game. Just as Perpiglia did, Gehan has developed a cult following.

Right as Gehan was raving to me about Perpiglia, the man himself walked into the Power Gym practice facility on the second floor of Conte Forum. Wearing plain clothes and looking as if he may have lost a step since graduating last spring, Perpiglia instinctively picked up a basketball and began hoisting up treys. He seemed right at home.

“Steve, what’s the most important thing you taught Gordon?” I hollered from across the gym.

Between airballs, he turned around and smiled. “Timing is everything.”