Home » Students Compete and Learn in BC Mock Trial 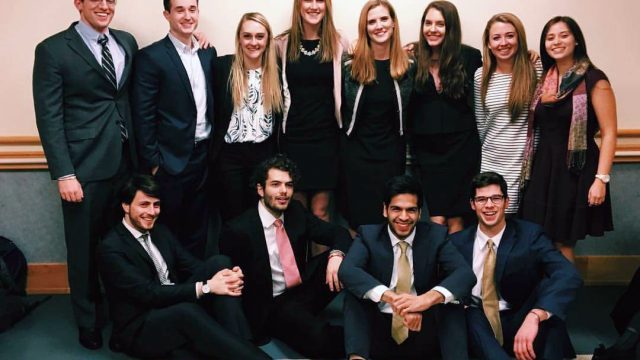 Students Compete and Learn in BC Mock Trial

Imagine an elderly man overwhelmed by the rapidly changing technology around him. Although he does his best to remain relevant in his field, he finds himself cast aside by his boss in favor of someone more adaptive. Could age discrimination have been the predominant factor in his firing, or was a lackluster job performance really to blame? These are the questions the Boston College Mock Trial program has to contend with in this year’s case.

The fictional incident, created by the American Mock Trial Association, took place at a newspaper-culture magazine in 2014. Sawyer Shaw, a Silicon Valley entrepreneur, buys the magazine and turns it entirely online, which alters the target audience of the magazine toward younger people. After working for Shaw for two years, writer Riley Winter is fired and accuses Shaw of firing him because of his age. Although within the report there is considerable evidence pointing toward age discrimination, there is equal data suggesting that Winter was not thriving in his career as a writer. As a team either for the prosecution or the defense, BC Mock Trial must prove that one of these sides of the argument surpasses the other.

Sam Kuchma, the coordinator of BC’s Mock Trial program and CSOM ’17, described how the group has already accomplished a lot in just this past semester, such as sending five teams to competitive invitationals at three different universities in the Northeast. BC Mock Trial also plans to send another team to Quinnipiac University for an upcoming competition.

Unlike other teams, which “stack” the competition by taking their best people and making what Kuchma calls a “super team,” BC Mock Trial strategizes differently.

“BC’s team is distinct in that we have four teams that operate individually,” he said. “I am the coordinator so I oversee all of them in terms of administration and planning for regionals and tournaments, but all four of these teams operate independently.”

In this year’s case, the teams have been broken up into prosecution and defense with three lawyers for either side, including an opening lawyer, middle attorney, and closing lawyer. The number of witnesses for both sides tends to vary, but is often more than the number of lawyers.

“As a witness you really get to have a lot of fun and use acting skills where as a lawyer you are able to object, dive into case theory and acquire a lot of lawyer pre-academic skills,” Kuchma said.

All of these invitationals prepare the team for the culminating event: regionals. Two teams will compete in a regional competition at Yale at the end of February. Kuchma will be hosting the BC Regionals, which will be held a few months from now right on campus.

As they approach, each team must take time to prepare. Kuchma’s team meets two or three times a week for two-hour practices, in which they work and collaborate on various aspects of the upcoming trial, such as “directs, crosses, opening statements, and closing statements.”

While Kuchma is the coordinator, Rohit Bachani, treasurer of Boston College Mock Trial and CSOM ’19, is responsible for making sure that the program is fiscally secure and complies with the standards set by the Office of Student Involvement, while also competing.

“Each team has its own dynamic and is familial and competitive at the same time and we all have a very strong rapport within the organization,” Bachani said.

Jordan Tessler, a Mock Trial member and MCAS ’19, also commented on how the program has taught her many valuable skills.

“I think that a lot of people think that Mock Trial is just for people that want to go to law school, but it’s not because it has taught me so much about public speaking and how to present yourself as part of a team,” Tessler said.

Kuchma, adding on to Tessler’s observation, noted the diversity of backgrounds in Mock Trial, including a biology major, a business school student, an international studies major, and a photographer and film studies major alongside pre-law students. This includes Kuchma, who will be working for a consulting firm next year and hopes to go to law school after that.

“The reason I coordinate and try to run the program as best as possible is because the people are great and Mock Trial itself is amazing,” he said. “One of the goals I have before I leave is to try and increase campus awareness of Mock Trial and get more people to come out and try out.”

Actors, debaters, and brave souls alike find a place in Boston College Mock Trial, where they seek justice, while also gaining a stronger sense of confidence, self-awareness, and community in the process.

mock trial
Academia at Rest: What Your Professors Did Over Winter Break
At Montserrat Coalition, Students Find Support and Assistance